The Immortal Ten bus crash in Round Rock, Texas

The Williamson County Historical Museum Honored the Memory of Baylor University’s 1927 Round Rock Bus Crash Victims, “The Immortal Ten”, with Guest Speaker Bob Brinkman at the Round Rock Public Library.

Photograph of the 1927 Baylor men's basketball team, from the Round-Up, the Baylor yearbook

By BOB BRINKMAN Special to the Leader

In 1927, Round Rock was a quiet town of 1,000 people at the intersection of State Highway 2 and the International and Great Northern Railroad. But on Jan. 22 of that year, this little community was the scene of a terrible tragedy that drew an international spotlight. On a cold and rainy afternoon, the Baylor University's men's basketball team was traveling to Austin for a night game with the Texas Longhorns. The high-way from Waco came through town along with Georgetown and Main streets, then turned south at Mays. Where the auto road met the railroad, there was no overpass, no automated arms, and no lights.

As the bus driver turned toward the railroad tracks, he noticed the Sunshine Special train was speeding along east-ward and that a collision was imminent. He attempted to turn east off the road and put the bus between the railroad tracks and the passenger depot. But on the slick roads, his actions only changed the angle of the inevitable impact. The train tore through the back and right side of the bus, instantly killing six of the players and student passengers.

When the train was finally able to stop, it backed up with the crew joined by the Round Rock citizens who had rushed to the scene. Then the train, which was headed for Taylor, continued on with two of the injured students, rushing them to the Taylor hospital. Two more students were taken to the hospital in Georgetown, but they died on the way. The two who were taken to Taylor also died that day. In a terrible irony, one of the men who heard of the crash and came to help was Ivey Foster Sr. of Taylor. Among the dead students, he found his own son.

After the bus crash, Baylor received an outpouring of attention and sympathy.

Other basketball games and events that weekend were canceled or postponed out of respect. Yet some long-reaching and beneficial developments came out of that awful Saturday.

State legislation was immediately introduced to construct overpasses or underpasses at all places where state highways intersected with railroads. When U.S. Highway 81 was built through Round Rock eight years later, the Texas Highway Department built the first rail-road overpass in Texas, as well as dedicating a plaque to the Baylor victims.

School buses across the United States soon introduced new safety features, and have been required ever since to stop at all railroad crossings before proceeding. One of the crash survivors, John Kane, graduated from Baylor and joined the U.S. Army Air Corps. Kane received the Congressional Medal of Honor in August 1943 for commanding his B-24 in a raid on oil refineries near Ploesti, Romania, safely returning his crew over a round trip of more than 2,400 miles. And at the first student assembly each fall at Baylor, they still set out empty chairs for each of the Immortal Ten.

Photographs of the 1927 Baylor men's basketball team, (from the Round-Up), the Baylor yearbook Courtesy of Bob Brinkman

Sam
xne
Dillow of Fort Worth 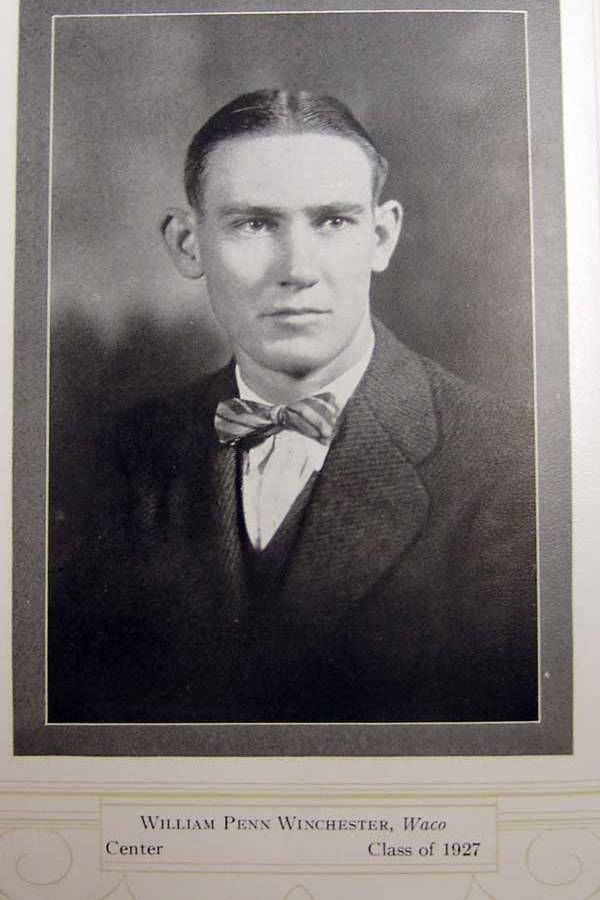