Before the H configuration was finshed 1890 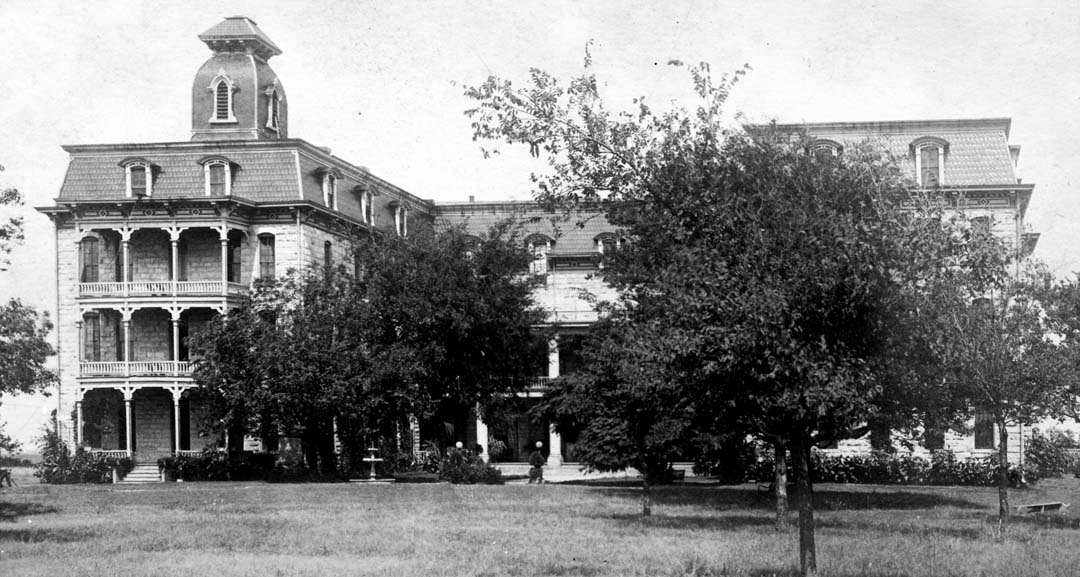 Excerpt from the book

Construction of boarding facilities for students at Southwestern University was begun under two different sets of motivations. The separate-but-equal doctrine according to sex required that the women's building be a self-contained educational unit supplying. In addition to the usual rooming and boarding spaces. Provisions for classrooms, music practice rooms, gymnasium, chapel, literary society rooms, and apartments for teachers and faculty manager. Its location had two conditions to meet. The distance from the main university building had to be short enough so that both components could be served by the same faculty and long enough to constitute a communication barrier.

The male dormitories were impelled by a desire to furnish less expensive board and room.

They were, therefore, less expensive structures and could be located on the campus grounds. Although conceived later, the male facilities were completed first. The need for the women's building was obvious at the time of the establishment of the Young Ladies' School in 1878. For the next five years, the poor financial condition of the university excluded such plans. The Northwest Texas Annual Conference meeting, 1883, resulting in pledges to the University totaling $35,100 stimulated action. Plans for the female building were delivered to Mood one week prior to his death. The report of the Board of Trustees for 1885, stated that the site of the building had been donated and envisioned a structure costing $56,000, of which $30,000 had been pledged; it also cited the need for a "Helping Hall System" for men.

Two years elapsed before the board felt sufficiently secure to begin construction. The first contracts were signed on July 23. 1887, and the last on June 6, 1888. The cornerstone was laid. September 22, 1887, 3:00 P. M. The ceremonies were conducted by Grand Master A. J. Rose, of the Masonic Fraternity. Distinguished guests were invited to participate, including Governor L. S. Ross and Senator J. H. Reagan.

Occupancy was to have occurred in September 1888: however, the move was delayed until March 7, 1889.

Five days later the dedicatory services were held in the Annex Chapel. The program included several addresses and numbers by the choir to the accompaniment of an organ, a gift of the Methodist Church in Cleburne, Texas. After the benediction, the building was opened to inspection, host and hostess, Professor and Mrs. C. C. Cody.

The site selected for the building, six blocks east of the Main Building, was a promontory overlooking the rolling prairies and in the distance, the San Gabriel River. The enchantment of the site, or perhaps the occupants, eventually lured the campus in the same direction. The structure was built of white limestone, four stories high including the mansard roof. Eventually, the building was to assume an H-shape, probably its original design, but at this time one of the legs of the "H" was not completed. All three floors of the southern exposure were protected by "ginger-breaded" galleries. A bell-tower in the shape of the lower half of a wasp-waisted woman of Victorian dress was perched in the center of the outside wall of the building's main leg.

The Annex contained sleeping apartments, parlors, recita­tion rooms, a chapel with "rounded corners for perfect acoustics," a dining room 78 x 38, music and art rooms, society halls, gymnasium, library, and infirmary. Descriptions of the new building extol its elegance. Today, enthusiasm for its living comforts would be somewhat dimmed by the knowledge that its original elegance contained neither central heating nor modern bathroom fixtures. To be able to give an uncontestable explanation of the financial measures employed to construct the building would be most satisfying. The labyrinthine character of the records. which would do justice to a Cretan engineer, constitutes a formidable hazard to reliability.

Most of the pledges were not paid or nor paid in full value.

The Snyder pledge for $20,000, later increased to $23,000 is a typical example. The extra amount lumped in and charged as a gift. Had been pledged for other purposes at an earlier date. The whole amount was absolved by deeding thirty-two acres of land, the site of the Annex, valued at $6,000, and the Snyder home, valued at $17,000, to the university. The home almost immediately was sold back to the same parties for $6,256 and notes for $2,500. Later the university paid off a lien on the Annex site valued at $1,314 and canceled the notes for $2,500. The actual cash realized by the university amounted to $4,942. If the value of the thirty-two acres is added to this amount, the real value of the pledge was $10,942.

The Ladies' Annex was financed by borrowing money from four individuals and two firms amounting to $28,893.45, the interest ranging as high as 11 percent. This amounts to approxi­mately 80 percent of the cost of the building.

This financial procedure is of more than particular interest.

A pattern was set for the next three major building efforts: the Administration Building, Mood Hall, and the Williamson County Science Building. Money was "borrowed" from the university itself, the money given specifically for endowment or loan fund purposes. The cannibalization of endowment funds kept the university on a constant financial treadmill of increasing speed. The process was not halted and reversed until the middle 1930s.

The Ladies' Annex received one major addition during 1905, an east wing completing the H-shape. The southern exposure of the new section did not receive the galleried treatment. The construction was done by the Belford Lumber Company of Georgetown at a cost of about $20,000.

The building stood as an educational land-mark until it burned on the morning of January 8, 1925.

View other land marks of Georgetown