The Saul family settled along Brushy Creek in Williamson County about 1850. One brother, Charles Saul (b. 1818) bought this 640-acre tract in 1862. This part of the ranch was first used as a family burial ground upon Charles' death on June 22, 1870. The cemetery has twenty-three marked graves dated from 1870 to 1918, including that of Charles' wife Louisa (Dawson) Saul (1814-1887). According to tradition, the cemetery contains a number of unmarked slave graves. This property has remained in Saul family ownership for well over a century. (1982)

The Saul Cemetery is located on State Highway 1660, five miles southeast of Hutto, Williamson County, Texas. From 1870 to 1879, the cemetery was a family burying ground known as the Charles Saul Graveyard. Mr. Saul, the owner of the property, was the first person buried there on June 22, 1870. Nine other family members were buried during this period.

On November 20, 1897, [1] Charles Saul Jr. and his wife deeded the burial plot to nine Saul relatives for $50.00. It then became known as the Saul Cemetery. This transfer in ownership of the property was due to a change in ownership of the property, and it was felt the transaction should be legalized in order to assure the permanency of the Saul Cemetery. Charles Saul, Jr. and his wife, by terms of the deed, retained a plot of ground that was their family burying ground. They also insisted that the deed specify that they were to retain a parcel of land six feet by nine feet on which Buck Saul, the son of a Negro slave, was buried. Buck Saul's monument has the following inscription, "Buck Saul - Born January 28, 1861. Died October 25, 1879."

Rumor among the Saul descendants is that forty-seven slaves were buried in the western section of the cemetery. Many remember the crude "iron pipe stakes" that were driven into the ground in that area but have since been removed.

During the early years of the cemetery families were responsible for maintaining their family plot.

But as years passed and families were scattered over extensive areas, the cemetery gradually received less and less care, and it finally became an unsightly place.

However, in 1975 Elizabeth Pumphrey Mason and Louise. Saul Overton, Charles Saul's descendants, began contacting. Interested parties to improve conditions at the cemetery. Volunteer contributions began coming in from far and near, and soon $750.00 was spent in making the Saul Cemetery presentable. [2] Since that time, Mrs. Overton has served as secretary-treasurer for the group, and each year she sends reminders to interested persons for donations. Now the cemetery is cared for regularly, and very soon, a chain-length fence will be erected to improve further the overall beauty and permanency of this burying ground:

Note: A copy of the original deed has been included because the • deed has not been recorded in Williamson County.

Most of the information in this history was derived from interviews with Louise Saul Overton, who recalls the history of the cemetery and is interested in seeing that the cemetery is permanently maintained. 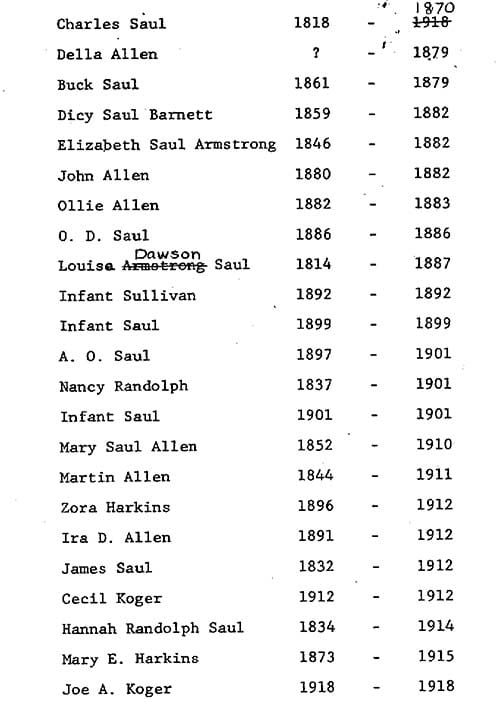 Historical narrative and Supplement from additional research by Myreta Matthews

In March 1975, the Saul Cemetery was surveyed and listed alphabetically by members of the Williamson County Historical Commission. [1] All inscriptions on the twenty-three gravestones were carefully copied. The cemetery is described as being located one-fourth mile west of Norman's Crossing, southwest of Taylor about eight miles, on Farm Road 1660 and five miles south of Hutto.

Charles Saul was born January 8, 1818, and died June 22, 1870, and is buried in what was to be called Saul Graveyard. His is the earliest marked grave, although there are many unmarked graves, some said to have been those of family slaves, that may have been earlier.

James Henry "Little Jim" Saul came to the county with his parents about 1850 and grew up in the cattle business about twelve miles below Round Rock on Brushy Creek.

In 1872 he took a thousand head of beef to Kansas with a crew including Buck and Jack Blanton, the Crum brothers, Summers brothers, and Charlie Saul, his own brother. He drove a 2,800 head herd to Nebraska in 1879 and 2,900 to Kansas the same year. [4]

The Saul family members became large landholders and engaged in cattle raising and farming. The acreage was passed down from generation to generation. Some of it changed hands, but some of it is still in the hands of descendants of the early owner, Charles Saul.

The Texas Department of Agriculture honored the Saul Ranch in 1974 in the TEXAS LAND HERITAGE REGISTRY Program "For a century or more of continuous ownership and operation as a family agricultural enterprise. To the dedication and perseverance of the founder and his heirs of these lands, we owe the basic wealth of Texas", so said John C. White, Commissioner of Agriculture.

Some important facts are given in the story of the land.

Six hundred forty acres were purchased February 6, 1862, by Charles Saul for $1,700 - $1,000 in cash and $700 in mules. Charles married Louisa Dawson, and the land was divided among three sons, John, James Henry, and Charles. John Saul married Melvina Louise Meniel. He bought an additional 1,652 acres, and eventually, this property was given in equal portions to his children, Eugene, Mary Louisa, and John. The younger John Saul and Josephine Mabry were married, passing their land down to four children, Louise, John Jr., and Jack. The current owner inherited 385 acres from his father, John, Jr. Cattle, Hay, and Grain are raised.

At least one of the Saul brothers seems to have been in the Civil War on the Confederate side. The name of James Saul appears in the list of applicants for a Confederate pension. His approved number is 09911 from Williamson County.

A study of cemetery lists reveals other Saul families were early residents in the county. About twenty miles west of the Saul Cemetery in the Bagdad Cemetery [9] near Leander are the following gravestones inscriptions:

In comparing names and dates, these could have been the parents of Charles Saul, 1818--1870.

Also noted in the list submitted by Mrs. Overton is a Dicy Saul Barnett, 1859--1882. She could have been the daughter of Charles as Barnett is one of the nine who are mentioned in the deed to the cemetery.