The Hose and Hand Pump Company was formed in 1884 as Round Rock's first organized fire department. Money for equipment was raised through donations, picnics, dances, box suppers, and other fund drives. The first building constructed for Round Rock's fire department was completed in 1892. About 1934, the department purchased its first piece of motor-driven equipment--a Model T Ford chassis. As one of the state's oldest volunteer fire departments, it continues to provide significant service to the citizens of Round Rock. (1984) 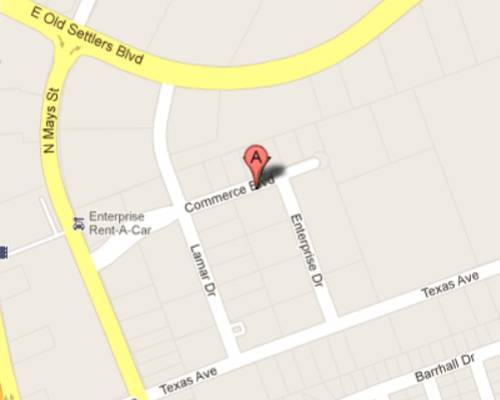 HISTORY OF THE ROUND ROCK VOLUNTEER FIRE DEPART

In 1876, a railroad came within a mile of the little town of Round Rock (formerly called Brushy). The business people decided to move everything near the railroad. Immediately, a new town was built within a block or two from the railroad track. They decided to call it New Round Rock, and-across Brushy was called Old Round Rock. [1]

The people realized they needed a fire company but failed to organize anything until a bad fire destroyed a whole block in their town.

In 1884, the citizens organized the Hose and Hand Pump Company, making it one of the oldest Volunteer Fire Departments in the State of Texas.

Having no funds for equipment or a building, money was raised through donations, picnics, dances, shows, box suppers, and many other programs. Most of these events were held in the Pennington and later Nelson Park.

With funds raised through these functions, some equipment was bought. In 1892, Fire Chief Clarence Woodard was authorized to buy Lot No. 4

Also an under-ground Cistern was dug to serve as a water supply for fire fighting.

A well was dug to about 60,' and a windmill was installed to pump water into an overhead tank and the Cistern. The building housed a manually operated hand pumper, a hose reel mounted on a two-wheel cart with several hundred feet of single jacket hose and nozzles. It is unknown when this equipment was bought, but it was bought sometime between 1884 and 1904. [3]

The hand pumper is now housed in the Central Fire Station at 203 Commerce. The bell is now housed at Station No. 2, located at the 300 block of South Blair and McNeil Road.

This building served the Department until about 1907 or 1908. Then it was removed, and a new two-story, 24' x 28' building was erected, which housed additional equipment. Upstairs served as an assembly room. No electricity was available. Oil lanterns were used when meetings were held at night. This building served as the Fire Station until 1936, when everything was moved to the new City Hall and Fire Station at 214 East. Main. The equipment consisted of the Hand Pumper, Hose Reel, and a new Hook and Ladder Truck, bought by the Fire Department with a loan of $700.00 from the J. A. Nelson & Company. Money was paid back by the Volunteers from donations and other programs. The truck had an overall length of 18 feet. It carried an assortment of ladders, such as extension ladders, straight wall ladders, roof ladders, pike poles, axes, and hand torches for night operation. [4]

In 1913, Round Rock became an incorporated town, and it was voted that a percentage of the tax money received was to be allocated for the Fire Department.

The Fire Department voted to donate all the equipment, including the two-story frame building located in Lot No. 4 in Block No. 23 on Round Rock Ave., if the City would provide a meeting place and a place for drills other functions. The City agreed that these terms would be provided as long as the Fire Department existed.

The carts also carried 100 feet of k inch hose with nozzle, 2 axes, and 2 hand oil lanterns. These carts were pulled to the fires by hand, horse-drawn wagon, or horse and rider and in later years by automobiles.

Around 1934 the Fire Department became motorized by buying a Model T Ford chassis for $5.00. A flatbed was built on the frame. The two 40 gallon Acid-Sode chemical tanks were placed on it. It became the first motor-driven equipment purchased by the Round Rock Volunteer Fire Depart­ment. The conversion was done by Fireman Fred C. Olson, who operated the Olson Garage at 200 W. Main.

Soon after, the Number 2 truck was bought. An electric motor driven Siren was bought and placed on top of the Woodmen of the Worldbuilding located on the corner of North Mays and Round Rock Ave., near the Fire Station. In 1934 it was moved to the first cross brace of the water tower, where it stayed until 1936. Then it was moved to the City Hall building at 214 East Main.

The Fire Bell was also moved to this location, and during World War II, it was erected on the Northside of the building and served as the Air Raid alarm.

After a disastrous fire in 1925, which destroyed a building housing a meat market and a bakery on the Northside of the 100 block of East Main St., the Fire Department realized it needed more modern equipment A Model T 1,1/2 Ton Ford truck was purchased with a mounted 300 GPM Water Rotary pump with a hose bed capable of carrying several hundred feet of 2,1/2 inch and some 1,1/2 inch hose, 20 feet of 3-inch hard suction hose and other necessary equipment.

The truck proved to be very efficient as there were no fire hydrants at that time, and it could draft water out of a Cistern, creek, or from an overhead tank when necessary. The truck became Number 1, as one Chemical truck was removed from service.

On July 29, 1929, the Round Rock Motor Company, a Ford Agency, was completely destroyed by fire.

It destroyed 14 automobiles. This location was where the Round Rock Public Library is now located. After this fire, the Motor Company donated a Ford model A 1,1/2 ton used gravel truck. The two chemical tanks and all other equipment was removed and installed on this new chassis.

In 1938, the City of Round Rock bought a 1938 Ford 2 ton chassis from a Ford dealer, the Round Rock. Motor Company. It was delivered to W. F. Darley & Company in Chicago and there built up into a 500 GPM pumper truck with hose bed, seat, running board pack step, and railing. The hose and all serviceable equipment were removed from the old Model T truck and placed on this new truck. This gave the Department a 500 GPM pumper, equipped with a suction hose for hydrant or drafting, 1000 feet of 2,1/2 inch and 1,1/2 inch straight stream nozzles, 3 straight wall ladders, and other miscellaneous equipment. The ladders used were salvaged from the old hand-drawn ladder truck.

In 1943, money was available to convert the Number 2 Chemical truck into a first-run truck. A front-mounted American-Marsh Rotary pump was installed. A 225 gallon used water tank with 150 feet of 3/4 inch high-pressure hose, and hose basket and k- inch straight stream nozzle, 2 Indian pack pumps, a 221-gallon foam extinguisher, axes, pike pole, ladder, and miscellaneous equipment was placed on the truck. This conversion was done by Chief H. L. Stockbridge and Cody Adolphson and mothers of the Fire Department. This truck controlled 90% of all fires responded to. It was good in rural areas, especially in pastures and where the land was brushy. Its size permitted it to travel where large equipment could not travel.

As growth increased in rural areas, it was necessary to add addi­tional equipment.

$4,000.00 was raised with donations and a couple of Bar-B-Ques. This money helped buy a new 1946 22 ton Chevrolet. This truck proved very valuable, as surrounding towns, Cedar Park, Leander, Pflugerville, and Volenta had no Fire Departments. They always called the Round Rock Volunteer Fire Department.

In 1954, it was found necessary to recondition the old Model Booster truck so it could be used to control pasture fires where other trucks could not go. This gave the Department three trucks in use.

In 1956, the City doubled the Station's size, which made roam for three trucks and a place for hose racks. Also, a 3 HP Siren was installed, replacing a small k HP Siren.

In 1957, first aid equipment and a Stephenson Resuscitator was added to the fire trucks.

This was paid for by holding fish fries and Bar-B­-Ques. At this time, 4-hour training classes held twice a month were scheduled to teach the firemen to use the resuscitator, lay hose lines, forcible entry, ladder drills, and any other fire problems.

In 1957, the City bought a used 1951 Ford, a 2-ton gravel truck, with a V-8 motor. The truck was reconditioned with the 75 GPM Rotary pump, a new 395-gallon tank, rear step board, hose bed, pack pump, dry-type extinguisher, 150 foot 3/4 inch connected to 3/4 inch fog nozzle, axes, pike pole, lanterns, ladders, and first aid kit. This became the Number 3 truck. It was used as the first run truck until 1975, when it was assigned to the Jollyville Fire Department, which is a part of the Round Rock Volunteer Fire Department. All of this work was done by Chief Cody Adolphson and several members of the Department.

In 1968, the City bought a 1968 International-Harvest chassis. Simms Fire Equipment of San Antonio, Texas, built the pumper. The truck was fully equipped with a 500-gallon booster tank and all the latest equipment. This became the first Class A 500 GPM Triple-Combination truck of the Round Rock Volunteer Fire Department, and it was the Number 4 truck.

Because of the area's tremendous growth, in 1976, a Bond was passed for a new Fire Station. The new eight-bay Station was completed in 1976 and was located in the 300 blocks of South Blair and McNeil. It was still Number 2 Station in 1984.

In 1975, the City bought a 6 x 6 Army truck that was used as a tanker truck by the U.S. Forest Service. This truck had a 700-gallon water tank and all other necessary equipment. Because of much mechanical trouble, it was later replaced with a REO Chassis.

The Citizens of Jollyville bought a truck like it.

To keep up with the fast growth, more equipment was needed.

Information of the Round Rock Volunteer Fire Department, prior to 1907, was written by retired members. Mr. W. E. Henna, who was elected president of the Round Rock Hook and Ladder Company on July 24, 1907, wrote a brief history when the Department was 45 years old. Since then, pretty accurate records have been recorded. [6]

In the early days, the Bi-Laws called for only 30 Firemen, but everyone helped in time of need. The Department operated under these By-Laws until they were revised in 1950.

Through the past 100 years, the Round Rock Volunteer Fire Department has been, and is at present, made up of many dedicated men. When the fire call comes, they leave their work or pleasures, sometimes in the cold dark hours of the night, at their own expense, and often risking their own well-being to help a neighbor in trouble.

Many families have three generations who have served the Department.

All the Chiefs, Officers and Fireman deserve the greatest praise

Each one has a history of service and dedication. But there is one tulip that is an outstanding example of what a Round Rock Volunteer Fireman and a de­dicated Round Rock citizen are like.

On June 22, 1958, Robert G. Griffith brought his bride, Helen, to Round Rock to begin his teaching career. He was a teacher and coach for seven years of his 15 years with the Round Rock Independent School District. Fourteen years out of these fifteen, he also served as Principal of Jr. High and Principal of Round Rock High School. His education consisted of:

Bachelor of Science - University of Texas - 1958

He is a member of the following educational organizations:

Association. Board of Directors Williamson County Teacher's Credit Union and Round Rock PTA.

In 1976 and 1977, he served as Director of the Texas Interconnect Association.

In 1969, he was voted OUTSTANDING CITIZEN of Round Rock.

As of 1984, he is Vice-President at the American Bank of Round Rock.

Robert Griffith has touched many, many lives through his Fireman, School, Church, Civic, and business activities. This writer and I are sure, past and present Firemen and Citizens of Round Rock say, ‘THANK YOU", Bob Griffith.