After James O. Rice settled in the 1850s near a spring-fed pond, the area was called "Pond Spring." By 1854 a log school building was erected near the pond (1 mi.N) and also served for worship and a social center. Thomas S. Rutledge ran a nearby store, post office and blacksmith shop. After the post office closed in 1880 and the Austin & Northwestern Railroad bypassed Pond Springs in 1882, the community declined. The school was consolidated in 1903 with Jollyville, moved to this site in 1927, and became part of the Round Rock district in 1969. (1979) supplemental plaque: In 2006, the Round Rock Independent School District moved this historical marker, commemorating the Pond Springs community and school, to this location, the fourth site of the Pond Springs School. 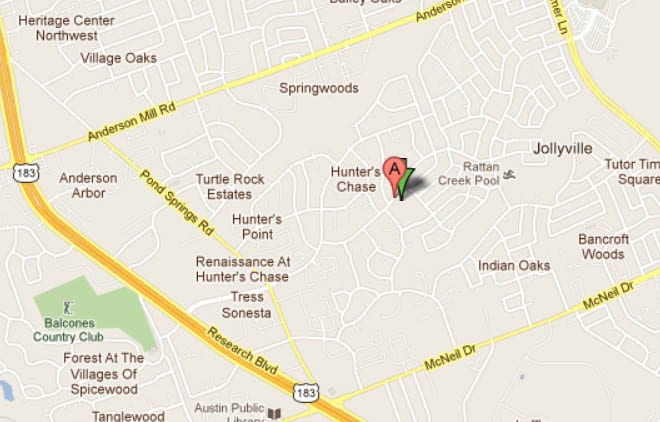 The area known as Pond Springs lies mostly in the Henry Rhodes * Survey, first-class headright land grant number I - 35, patented on March 12, 1841, and partially in the Elisha Allen Survey, first-class headright land grant number I - 130, patented on December 11, 1841. [2] The earliest settlers called the area Live Oak Prairie. [3] One of these earliest settlers was James 0. Rice, who fought in the Texas Revolution and was an early Texas Ranger. James 0. Rice is the person Rice's Crossing was named for when he later moved to that area of Williamson County. James 0. Rice settled near a pond formed by an underground spring in the early 1850s. [4] The area was called Pond Spring, but later the name Pond Springs came to be the common name. [5]

James 0. Rice did not live in the area long, but soon other pioneer settlers came to work the land and serve as merchants.

One of these early families was the Rutledge family. The Rutledges owned the property where the original pond spring was located. During the period from around the mid-I850's to 1880, the area *Rhodes sometimes misspelled as Rhoads.

was also called Rutledge, for the large Rutledge family. The Rutledge family included Thomas S., William P., H. M., John R., Jim, Manie, Arthur, Clyde, and Neely Rutledge. The Rutledge family built and ran a store-post office and a blacksmith shop across the road from the log schoolhouse. Thomas S. Rutledge became the first postmaster of Pond Spring on March 16, 1854. The stage line that headed northwest from Austin over the "mountain road" otherwise called the Central National Road passed through Jollyville, POND SPRING, Running Brushy (Cedar Park), Bagdad, Liberty Hill, South Gabriel, and Lampasas, and this stage line passed the Rutledge store. For a mile and a half to the south of Pond Spring on his property, Rutledge built a rock fence on each side of the road, giving an elegant appearance as the stage approached and passed between the store-post office and blacksmith shop on the west and the log school house on the east. Remnants of the old stage line road and rock fence are still visible today on the Harry Dearing place along U. S. Highway 183. [6]

The post office at Pond Spring had several postmasters, including Elisha Rhodes (1857), Thomas Strode (1857), William P. Rutledge (1862), Mrs. Ettie C. Rutledge (1866), and the post office was discontinued July 29, 1880. When the Austin and Northwestern Railroad was built in 1882, it bypassed Pond Spring, creating a new village to the northeast called New Rutledge. Sometime around 1887, the small log schoolhouse, which was built before 1854, was lifted onto logs and moved by pushing it along on them from its place by the pond to a location about one mile south. It continued to be called Pond Spring(s) School.

Old Timers remember the old log school house being the center of the Pond Springs community.

It served as both the school, meeting place, and church. The log school was used for church on Sundays and a place to hold prayer meetings on Wednesday nights. " I recall going to church in the school. Once a month, a preacher would visit, and that was a real event." Says Helen Cahill, who grew up in the community of Rutledge. During the early I900's sessions were often cut short so the students could help their parents on the farm. In 1903 the Pond Springs School and the Jollyville School were consolidated into the Pond Springs School. [7]

In an early picture of the Pond Springs School taken in 1895, that hangs in the school, it shows school Trustee's Jim Walden and T. Houghton.

The Pond Springs School remained at that second location until 1927 when three acres of land out of the Henry Rhodes survey was sold to the Pond Springs Common County Line School District Number 5, by William L. Carter. [10]

Mrs. Emma Mae Ward King related "We came to this country in 1878 in covered wagons and by horseback driving our herd down to and up the Colorado River, later settling in a small school community called Pond Springs, evidently named for its numerous ponds and cool fresh running springs of water.

Things that stand out vividly in my memory are the spelling matches and different kinds of entertainment held in the little one-room schoolhouse, and on occasions, the constable, George Cornwell, shot and killed the horse from under one of the thieves.

Connected with these spelling matches and The Blue Back Spelling books was a widely known and beloved teacher, Miss Ida Johns. Our lively hood was provided by trade, and transportation was made by the wide wheeled wagon drawn by several yokes of oxen. The oldest store I can remember was operated by John Dittlinger and his family.

We walked for miles to school for our education. Once we had a mule, we would ride sometime, leading him almost half the way in order to find someplace we could get up on his back. The Methodist Church services were held in the schoolhouse, and there at the age of 14 years, I became a member of the church.

Nany Thorpe was a teacher in the school in those days and was very efficient in pronouncing at the spelling matches.

We rode horses in those days with "side saddles," and our riding hobbits were long skirts. We could drive our cattle and ride as fast and hard as any present-day rodeo girl.

Now, as I leave the ox wagon and cruise along in the present-day limousine on the beautiful highways that pass by the new "Pond Springs School," I reluctantly close my eyes to the memory of long, long ago." ** [11]

A campaign to consolidate Pond Springs Common County Line School District with the Round Rock Independent School District got underway in 1969. The two schools consolidated in 1969 after an election was held in both school districts. In 1970 a cafeteria and four extra classrooms were added to the old building. Other additions were added in 1972 and 1976. The Pond Springs School is still operating and growing and remains one of the oldest schools in Williamson County. [12]

** Mrs. King's letter is not dated, although she has been dead many years.