Photo courtesy of Lois A. Burkhart

A special thanks to The Georgetown Heritage Society and Martha Mitten Allen for letting us post these wonderful first person stories.

Mr. Burkhart came to Texas when he was 14, and in 1882, he established the Burkhart news stand.
Mr. and Mrs. Burkhart married and they had two sons and two daughters. Herman Brown had his first office in the back of Mr. Burkhart's store, and he took a team and a wagon to Houston and started Brown and Root. He asked Mr. Burkhart for one of his boys to go with him. And he said, "Veil . . . you take that Carl, but you can't take dot Heine. I can't let dot Heine go". That's how he got his name. His name was Henry, but everybody in town called him Heine, and that's what he went by. So Heine went to work for his dad when he was a barefoot boy and sold soda water out of a tub.

When Mr. Burkhart first opened up, he carried his papers and things, and he peddled cigars. He'd take them out to Walburg ... and Heine would drive for him. They had an old horse and a hack. He wouldn't let Heine get off because he had to go in beer joints, and he wouldn't let Heine go in there. So Heine said he just had to sit out in the sun and wait until his daddy got through talking to all the Germans out there.

After his father got up in years, he just walked out one day and said, "Heine, you'll just have to take over, I'm going home." So he went home and never did go back. He wouldn't even go back to town to see anybody. Said if anybody wanted to see him, they could come down there. But his store was a place for the men in town to gather. They'd go in the news stand and talk to Mr. Burkhart. His wide acquaintance made it a gathering place for the businessmen and professionals of town . . . You couldn't go in there and stir them with a stick. They were politicians. The man I remember the most was the sheriff here. He had a chair and he sat outside of that store all day long. He watched the square. Henry Purl, he was the sheriff.

Mr. Burkhart knew nearly everybody. He knew every-body and he knew the year everybody passed away. They used to pass out these notifications. They'd distribute them over town, as to who died and when the funeral would be. Every time Mr. Burkhart would get one in the store he'd push it under the glass top on one of those great big long tables. When I sold those tables, when I had to sell the store, I discarded all those.

The people who lived out north of town were primarily white, poor whites, in very, very modest little homes. They were called "Charcoal Burners." This area was all cedar. The people who lived on farms, and many had big farms, they called them "Brush Burners." The farms' soil was not good enough to grow cotton or good vegetables on. All you could do was raise goats and sheep and make charcoal out of the cedar. They sold the charcoal to people who ironed clothes to heat their irons.

A lot of the people who lived out near Booty's Crossing became very, very rich, when the dam was built.

THE RIDGE AND GRASSHOPPER TOWN (Georgetown)

The Ridge is down below where the I. & G. N. railroad tracks used to be. Georgetown was divided. What they called the "affluent people" lived over on the east side, and the Negroes lived over on the Ridge. Some of white people lived in Grasshopper town. That's over on the west side between Negro Ridge and the affluent part of town.

I can remember when we had a dairy over on Chautauqua Hill; (they called it Cedar Hill). We had to cross the river, and we had to walk through Grasshopper Town to get to school.

This part of town was called Methodist Town (The University area). A lot of the moneyed people lived up here. I lived down in what they called "Grasshopper Town". It was mixed, with some blacks living pretty close to us. We had what we called a lot of rock fights, too. But some of us were good friends. And out by the Oil Mill, they called it the "Oil Mill Greasers", and over here was what they called "The Hollow", just a few houses.

The King's Daughters was an organization and they had a hospital on Ash Street. The house is gone now, but it was a big, two-story house and they used to have a hospital there. They helped people that couldn't help themselves, and took care of people. People used to come through in covered wagons. I know that this one woman had several children and she was pregnant and she was sleeping on the ground. The King's Daughters decided they'd help her and so, they got her help. They got a job for her husband, and when they told him that they had a job for him, he refused it. He said, "Well, my people are road people and we don't accept jobs like that.

I learned to drive at fourteen, when you didn't even have to get a license, just go up there to the courthouse. Uncle Turner would say, "Baby, you can go up there and tell them you are driving a car now, and put your name down." He would send me sometimes after ice, down by the ice house. I would get in that old Ford, A-model Ford, and go pick up the ice.

They made ice. You could hear it "boom, boom, boom, boom." Then somebody would come out on this long porch with scales and great big chunks of ice. "I want a dime's worth of ice." They'd break off a block and put it back on the fender and you'd go home with it.

I remember we got a wooden refrigerator, not electrical. Later on, we got a "Coolerator". [Then] we just bought ice when we were going to have company and were going to have ice tea, or something like that. They would take a tub ... and wrap the ice in what they called grass sack or tow sack, wrap it up, wrap it with newspaper, then wrap it in its tow sack, have an ice pick out there, and if you wanted to get a little ice, you'd chug a little off with that ice pick.

Grandmother Hodges had all these children and she wanted to educate them as best she could. So she built—I guess you could build them reasonably then—a big house. She took those boarders in for twelve dollars a week—bed and gave them lodging. She fed her own children well and she fed the students well. She had a big boarding house. In those days, they were relatively popular because they didn't have any eating place out at Southwestern much.

She worked hard. Of course, my grandfather helped her some when he was there, but, on Sunday, he'd go out and preach and she'd have big meals and invite our own family in, too. But she'd feed her boarders first. Then she'd feed us. We always had big meals when we went to my Grand-mother Hodges' house. She was a good cook. But I don't know how in the world she fed those boys and did their laundry. 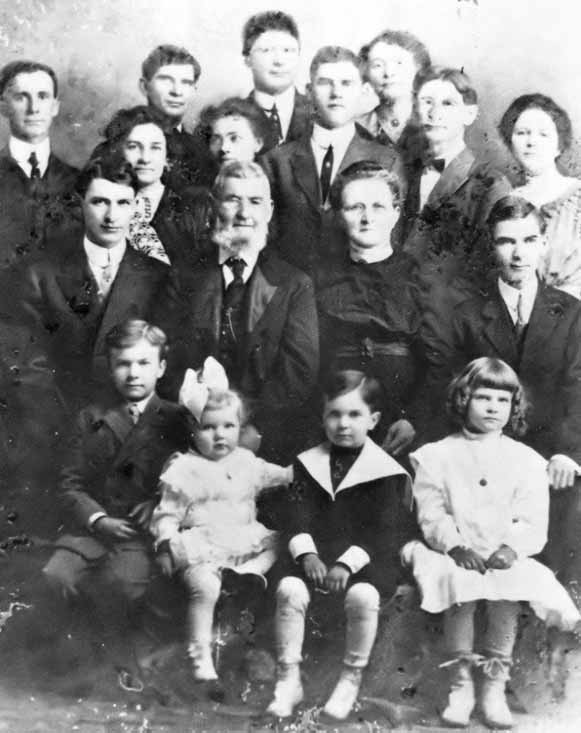