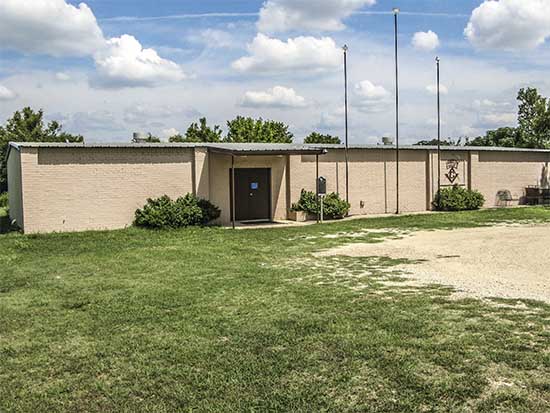 Organized in the Williamson County community of Bagdad, this Masonic Lodge was chartered formally in 1871. It was named for Norton Moses, who participated in the group's formation. A lodge building, constructed in 1870, also served as a community meeting center and public school. In 1899 the Masons moved to the new railroad town of Leander, where they actively supported the public schools and other community activities. Through its leadership, the lodge has been instrumental in the development of western Williamson County. (1985) 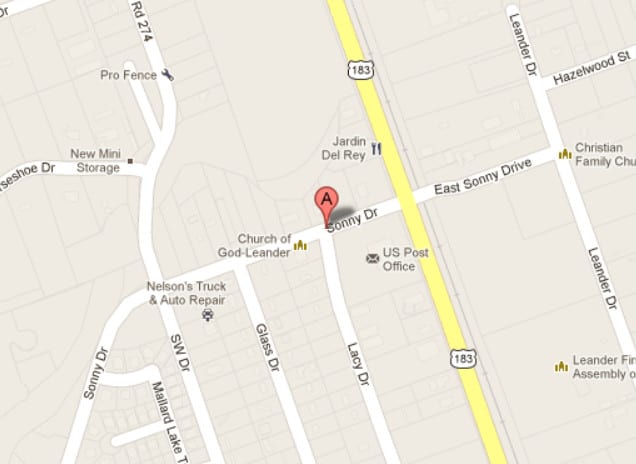 In 1845 there were three homes in the area where the Norton Moses Lodge #336 A F and A M would later be organized. Tom Hornsby, Har­mon Smeltzer, and James Rice had settled on land received for earlier service to the Republic of Texas. (1). James Rice had been a lieuten­ant in Tumlinson's Rangers, which had built Block House Fort about three miles southeast of his later home. It was also Lt. Rice who discovered Manuel Flores, a Mexican officer, acting as an Indian agent in the same general area. (2).

In 1851 James Rice sold his home to Charles Babcock. The arrival of the Babcocks was the real beginning of the founding of the community. That same year, 1851, the government built a line of forts to the west of Austin, with Ft. Groghan being the closest. The home of the Babcocks, lying halfway between Austin and Ft. Croghan, fell on what became known as the "military" road because of the army traffic. His place, at times, was used as a campground for the military. Babcock built an inn facing this much-traveled road and in 1854 surveyed a townsite which, at the time, was without a name. (3)

Others came and opened stores, blacksmith shops, and other ventures.

Thomas Huddleston came and named the community Bagdad after his old home in Tennessee. Huddleston became the first postmaster of Bagdad in 1855. (4).

On June 24, 1868, a group of Masons met at the home of J. L. Rucker for the purpose of organizing a Masonic Lodge in Bagdad, Texas. A committee was appointed to locate suitable land for a building. Mem­bers of this committee were Thomas Huddleston, B. J. Oliver, J. L. Rucker, James Branch, and Henderson Kirk.

James Babcock donated lot #1 in the town of Bagdad. The lot was located about one hundred yards east of the town crossroads on the south side of the road and in the near vicinity of a log school and church building.

It was to be of native stone quarried on the headwaters of Running Brushy Creek (Cedar Park). The lower floor was to be used for school, churches, and public meet­ings. The upper floor was reserved for the Masonic Lodge. (5). Estimates for the stonework and woodwork were $2163.00, and funds were needed. Thomas Huddleston agreed to lend $1,000.00 at 10% inter­est. Ero Talbert of Georgetown donated scaffolding and rafters. Several others made donations of gold, silver, or labor. The original note to Thomas Huddleston was signed by thirteen members. The deed for the land was given and signed on July 12, 1868. By-laws were formed. (6).

His pay relied on tuition. The school began on the first of December and was held for five months. Old bills show the cost of one desk for $13.00, and 24 desks ordered from Philadelphia for $177.00. (8)

The Presbyterian Church was organized on February 14, 1857, on the headwaters of Brush; Creek. For a time, their services were held in a log cabin, which had been moved to Bagdad. After the Masons built their two-story building, they, too, used it for services. (9).

On January 27, 1871, a letter from the Grand Master at Corsicana no­tified D. L. Emmett that a charter would be given to form a lodge in Bagdad, Williamson County, Texas.

In a letter received February 14, 1871, Norton Moses stated that he would arrive the following Saturday to set the lodge work. (15).

At the next meeting, by-laws were adopted, and dues were set at $4.00 per year. The charter was granted and dated June 1871. Brother Davis, District Deputy of the Grand Lodge, presented the charter. The first officers were installed on December 27, 1871. In the 1880s, the dues were cut in half due to the drought. (17).

On October 7, 1871, the lodge gave formal permission for the lower floor of the lodge to be used as a school that the lodge had helped establish. (18).

Roads in Texas were few and in poor condition. From 1850 to 1882, the government encouraged the building of railroads as a means of develop­ing the country and getting products to market. The Civil War, Re­construction, and a threat of a European War in 1870 held progress of the railroads back for a time. On April 29, 1881, the Austin and Northwestern Railroad incorporated. The charter provided for building a narrow-gauge railroad running northwest from Austin to Burnet, which would eventually link Austin with Abilene. A spur from Burnet to Marble Falls would provide transportation for granite needed in build­ing a new capitol for Texas. When approached, the men of Bagdad re­fused to allow the line to go through their community. They did not want their peaceful way of life disrupted. (20). The railroad officials changed their route by moving the line one mile east of Bagdad.

Then the summer of 1882, some of the merchants of Bagdad realized their mistake and moved their business to the area of the railroad.

Their move created Leander. On July 17, 1882, the railroad company sold lots. At this time, most of the residents moved to the townsite, which had been named Leander. The post office moved from Bagdad to Leander on Oct­ober 6, 1882. (21).

After receiving dispensation from the Grand Lodge of Texas, the Norton Moses Lodge was moved b Leander on September 12, 1899. (22) They met above the Jennings Mercantile Store, which was rented for $60.00 a year. (23)

In 1901 the members of the lodge moved the Methodist Episcopal Church South from Bagdad to Leander, Texas, by the use of log beams and mules.

In 1901 the old lodge building in Bagdad was torn down stone by stone and moved to Leander, Texas, where it was re-erected and donated to Leander as a public school. (24). The lot in Bagdad was deeded to the cemetery. (25).

In 1910 the Order of the Eastern Star, Leander Chapter #73, was given permission to use the building as their meeting place. (27).

The Leander Public School burned, and once again, beginning September 1938, the lower floor of the lodge was used as a schoolroom for a year.

This same room was also used as a voting precinct for many years. (28) The lodge celebrated its 100th anniversary in July 1971 at a regular stated meeting. The anniversary date of 1971 was from the 100th year of the charter.

The city of Leander was incorporated in 1978. Streets were named, and houses were numbered by October 1980. (29). The Norton Moses Lodge now had a specific address, which is 201 North Brushy, Leander, Texas. In 1980 members of the lodge set up a Norton Moses Chapter of the De Molay and gave permission to them to use the building. (30). On Feb. 19, 1983, the 112th birthday of the lodge was celebrated. The celebration, held in the lodge, included the presentation of a plaque to Lois Giddens for 60 years of continuous service to the lodge. Giddens has been active in many areas of the Leander community. One of the local schools was named after him. (31) 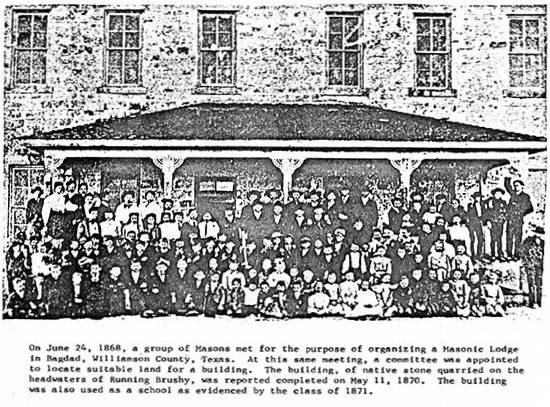 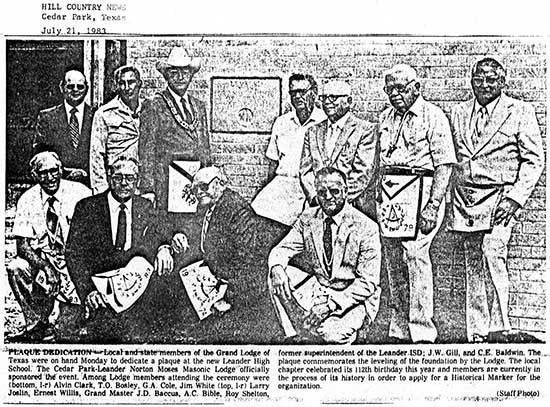