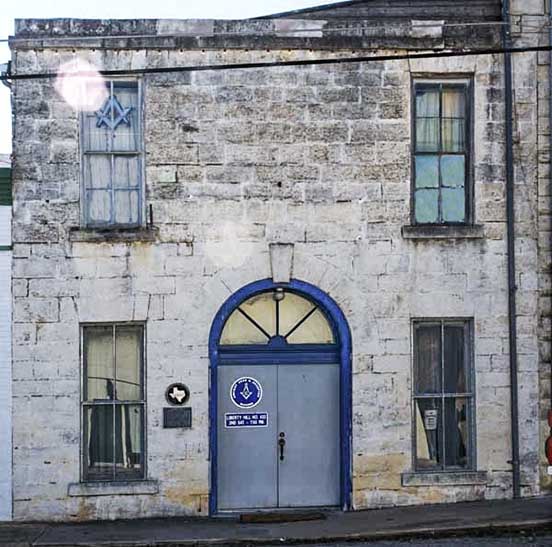 Chartered in 1875, Liberty Hill Lodge No. 432, A. F. & A. M., met first in the Methodist church. When this building was finished in 1883, the Masons purchased the top floor for their lodge hall and built an exterior wooden stairway to the room. This native stone structure was erected by Scottish-born John Munro, who operated a hardware store below the Masonic Hall. The lodge bought the first floor from his heirs in 1945 and often use it as a community meeting place. Recorded Texas Historic Landmark - 1976.

The Masonic Building is on the west side of Main Street in Liberty Hill, Williamson County, Texas. Main Street is also Highway Loop 332. It is Lot B in Block No. 1.

This is in the Henry Field Survey dated July 31, 1845, Patent No. 56 in Volume 3 of Williamson County Deed Records.

The lodge was organized and chartered in 1875 and met in the third story of the Methodist Church. In May 1883 they decided to find a new meeting place.

They first considered building another floor to a rock building (in 1975 occupied by the Liberty Hill Feed and Seed Store), this building belonged to John Munro, but the Masons found that the building would not safely hold a second rock floor, and abandoned this idea. They then worked out an arrangement to buy the second floor on their present (1975) Building from John Munro soon after it was completed in 1883. They have met there from that time to the present.

In 1883, when the Masons bought the upper story of the John Munro building they erected wooden stair steps on the outside at the back.

A wooden trestle or landing still stands. According to the minute's book of the Masonic Lodge #432, John Munro, a member of the lodge, made a proposition to sell to the Lodge the upper story of his rock building which was just being completed. (History p.7). On motion, it was resolved that a committee of three be appointed to purchase the second story of Brother Munro's building, said payment to be not less than $ 500.00 and to execute a note for the balance in twelve months time at ten percent interest. ($ 850.00)

The Masons bought the first floor of the John Munro building from the three Munro heirs who inherited it.

Williamson County Deed Records Volume 329, page 437 shows that Fannie Munro Peveto (a widow), Will Munro, and Jennie Munro Atwood and her husband, A.Atwood sold for $ 1,350.00 to the A.F. and A.M. Masonic Lodge No.432 of Liberty Hill the north 1/2 (one half) of Lot 3, Block 1, on Main Street of Liberty Hill. The frontage of the lot is 25 feet, and the depth is 200 feet. This is the lot on which the lodge hall is situated. The transaction was executed by J.E. Humphries, Worshipful Master; J.J. Gregg, Senior Warden, and T.M. Casbeer, Junior Warden, on behalf of the Masonic Lodge and was executed September 7, 1945.

The structure has a length of 60 feet and a width of 241/2 feet, with a floor space of 2,940 square feet. -- (measurements from Chesley Real Estate Company map.)

When John Munro sold the second story of his building to the Masonic Lodge he retained the first floor and conducted his business there and in his adjoining one-story building, he sold hardware and general merchandise.

The entrance to the lodge Hall was at the back of the building and the wooden stairs were on the outside with a square landing about six by six feet. There was a wide door.

After buying the first floor from the John Munre heirs, the outside stairs were removed and now only the landing remains. This lower floor was converted into a dining hall. Inside stairs were built at the back. A kitchen and restroom were installed. Four long tables and eight long benches were put in. The entire building is heated by propane gas stoves. The upstairs hall is air-conditioned.

This ground level floor has been used in many ways since it was obtained 30 years ago.

On occasion, the Masons have suppers and receptions as also did the Eastern Star chapters. Non-profit organizations also use the facilities. Boy Scouts and Girl Scouts have met here regularly. Bake sales and rummage sales have been housed there for some benevolent cause. It is often used as a voting place during - primary and general elections.

There are plans in progress for some needed repairs.

The doors and windows need to be painted and some facings replaced. The stone and mortar seem to be sound but a general buffing would add some sparkle to it all.

The town of Liberty Hill is on an upswing after many years of going down.

Many downtown buildings are being done over or restore, the population is increasing rapidly and it is expected that this Masonic Building will hold an important place in the future life of the community.

The date is carved in a stone near the top of the building in the center of the border-like decoration. This is a two-story structure.

John Munro used the lower floor of this building for a hardware business and the one-story building adjoining it on the south for a dry goods business. There were two wide arched openings between the one-story building to the south of the two-story building. Both were owned by Mr. Munro. The rock structure looks identical from the rearview. The front of the, now, "Feed & Seed" store is faced with brick painted white.

At this late date, it cannot be determined from which quarry the stone for the Masonic building was obtained.

A quarry at Gabriel Mills produced hand-hewn stone similar to this. There are some quarries in operation in this area at present. A rock quarry continues in operation west of Liberty Hill and the stone is cut at a nearby plant but it does not produce the same appearance.

Some of the other nearby buildings on Main Street were said to have been built from old rock fences with a front of machine sawed stones. One old quarry on the Casbeer Place sent large stones on flat cars to Austin to be cut. This was said to have been in the early 1900 s.

Mr. Farrow came to Liberty Hill in 1883. He says, "The Munro building was about halfway up when I got here, and they were having school upstairs in the Methodist Church, the school being called the 'bat cave".

JOHN MUNRO, of Williamson County, is a son of David and Isabella Munro, natives of Ross county, Scotland, where the family has lived for many generations. The father of our subject was a blacksmith by occupation, but for many years had charge of the waterworks of the city of Dundee.

JOHN MUNRO was born in Dundee, Scotland, on March 16, 1846, and early in life learned the blacksmith's trade. At the age of twenty years, he emigrated to America, landing at Galveston, Texas, in February 1867, and for the following four years was engaged in farming near Austin, Travis county. He first began work at his trade, but as he was obliged to use charcoal instead of stone coal, as he had been taught, he was not able to satisfy himself and gave up the shop. Since 1871 Mr. Munro has made his home at Liberty Hill, where he was engaged in blacksmithing until 1883, and in that year embarked in the hardware business. He now carries a stock, amounting to $2,500, and is also engaged in farming.

December 22, 1870, in Travis County, Texas, our subject was united in marriage to Jennie Ross, who came with her parents to America in the same vessel as did Mr. Munro, and who was raised within five miles of his home. They became acquainted after locating in Travis county. She was a daughter of William and Mary (Campbell)Ross. The mother is deceased, and the father still resides in Travis county. Mr. and Mrs. Munro have eleven children: Mary J. David, Jennie, Fannie, William, James, Margie, John O., Lula J. Dora Lucy, and Horace Nelson. Politically our subject affiliates with the Democratic party is Treasurer of the Board of Directors of Liberty Normal and Business College, and a Trustee of the free school. In his social relations, he is a Master Mason, and religiously is a member of the Methodist Church, in which he holds the position of Superintendent of the Sunday School.

More History And Notes On The Lodge - PDF