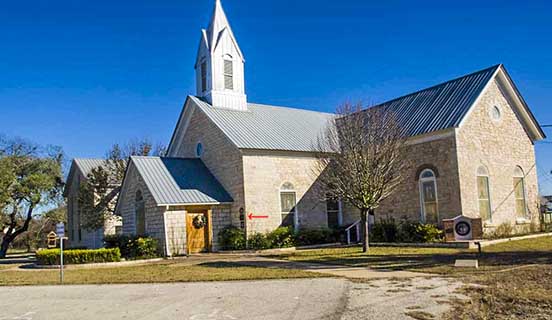 Directions
Liberty Hill is located in western Williamson County, on TX Hwy 29, about 3 miles west of the intersection of TX Hwy 29 and US Hwy 183. 101 Church Street

A hundred years ago, a visitor to this spot would have noted a scene very unlike the one we see today.

At that time, construction was underway on a three-story building of native stone which was designed to house the Liberty Hill Masonic Lodge on the third floor, a school on the second, and the Liberty Hill Methodist Church on the ground floor. One of the stonemasons was Mr. J.D. Russell, who lived just across the street in the home recently vacated by Mrs. Mary Remm, and he was "Grandpa Russell" to several of our present members.

"This church was organized in 1854, in the settlement known as Old Liberty Hill, on Bryson Hill, about one and one half miles north¬west of here, and was made up of five members: Anthony Smith and his wife, Amanda Smith; John T. Bryson and his wife Amelia Edwards Bryson, and their daughter Huldah, a young lady about sixteen years of age. Whether the first meeting was in a home or the log building which served as school and "meeting house" is not known, but for many years all preaching services were held in homes or this building, located near the old John T. Bryson home on State Highway 29.

By 1870, the community had grown larger and the population had concentrated more to the southeast of the older settlement.

An old, old paper, dated October 27, 1871, gives a list of citizens who pledged money, or, in two cases, a horse valued at $50, for the purpose of building an M.E. Church, South at or near Liberty Hill. Pledges ranged from $10 to$500 and amounted to near$2300. How many pledges were paid in full is not made clear, but the land was donated by Mr. T.S. Snyder, who was a son-in-law of John T. Bryson, and construction was underway. A few years later, in 1875, the Liberty Hill Masonic Lodge was chartered and put the upper story to use. Both church and school were held on the second story level for some time, as the first floor remained unfinished until a later date. We are told classes were sometimes interrupted by the squealing of the town hogs who bedded down on the ground floor. Access to the upper stories was by an out-side stair-case about where the choir space is now. Later, the Lodge secured another building, and both upper floors were used as a school, the top floor by then known as "The Bat Den" The bats also occupied it

Later, Liberty Normal and Business College was built, and the upper floors were unused till 1903.

In December of that year, misfortune struck both schoolhouse and the Baptist Church were destroyed by fire, so again the Methodist Church was used as an emergency school. My class sat in this sanctuary with Mr. J.N. Matthews as the teacher. He had no desks, no blackboards, nothing except a vast amount of patience and a group of grade-schoolers sitting on hard church pews!

"In 1905, with Z.V. Liles as a pastor, the two upper floors were removed, the choir and pulpit space enlarged, with three memorial windows added in memory of Anthony Smith and wife, Capt. D.V. Grant and wife and John T. Bryson and wife. The lower casements of the Grant and Bryson windows were destroyed and later replaced, the Bryson window rededicated in memory of my parents, Warren and Margaret Bryson.

In 1913, while Rev. M.J. Allen was here, the tabernacle was built to replace the brush arbors which had been used for revival meetings.

In 1916, under the pastorate of R.E. Duke, to accommodate our growing Sunday School, the two wings were added, with additional memorial windows added, three of these being for J.G. Bryson and wife, T.N. Bryson and wife, and John Munro and wife. All these were destroyed, with the Munro window being recently relocated in the sanctuary.

The most recent addition to the building is the vestibule, with the memorial window honoring the church founders.

Our parsonages, too, have undergone changes.

No history of early church days would be complete without mention of the camp meetings which played such an important role in the social and spiritual life of our early settlements.

Some of the earlier ones were held on Little Creek, west of town. Many were held on Jenk's Branch, south of here on the old stagecoach line, presently the Liberty Hill - Bagdad Road. Jenk's Branch was then a beautiful, spring-fed stream -- quite a contrast to its present condition I The first meeting here was held by Josiah Whipple. We are told that Goodson Bryson "PITCHED THE TUNE" for the songs. He was the father of Dr. J. Gordon Bryson, whom many of you know. At the close of the service, when mourners were at the "mourner's bench", his mother, Amelia Bryson, would sing this song, which I once heard sung by Mrs. Mary P.Chapman when she was quite old. (Mrs. Chapman was a neighbor and friend of Mrs. Bryson's.)

"Come, think on death and judgment,
Your time is now far spent.
You've been a wicked sinner,
'Tis time that you repent!

"I know I've been a sinner,
And wicked all my days.
When I grow old and feeble
I'll think upon my ways.

"But what if you lie down tonight
Supposing all is well,
And should your eyes be closed in death?
Your soul awake in Hell?

"My case would then be awful
I now begin to see.
I pray the Lord to have mercy,
Lord on me."

The last camp meeting for the Liberty Hill-Bagdad circuit was held on Jenk's Branch in 1883.

I recall two incidents concerning the camp meetings related to me by my relatives. My grandfather's horse, "Old Boston", was stolen. He felt the preaching must have had a good effect on the thief, because, returning from church services one day, he found "Old Boston" tied to the lot gate!

The other was told to me by my aunt, Mrs. Maud Bryson Crocker.

Her mother had a fluting iron, and she had carefully starched and fluted the dresses her two little girls were to wear to the Sunday camp meeting service. Having dressed them, they were sent out of the tent to wait while she turned her attention to the two younger boys. Alas for variety-- the two girls wandered into a bed of seed ticks, so starched dresses and girls had to have a good washing to rid them of the seed ticks. I don't know whether grandmother made it to church or not that day!

Our church has been shifted about among the conferences quite a bit.

Our first Sunday School was also organized in 1854, also in Old Liberty Hill.

"Four ministers have entered various conferences from our church. The first was A.P. Smith, the son of Anthony; T.N. Barton and L.W. Walker and D.L. Landrum are the others.

One revival meeting held in 1886 at Liberty Hill deserves special mention, due to its great influence on our town.

It was scheduled to run one week, at the church, and the preacher was John R. Nelson. Attendance overflowed the church, so the men hastily constructed a brush arbor and the meeting continued for several weeks. A number of mature men became Christians at this time, among them Mr. John Munro, who was our Sunday School Superintendent for thirty years.

In 1937, new pews were purchased. Richard Gamenthaller was pastor.

"In 1939, the several branches of Methodism merged, and we became the Methodist Episcopal Church and more recently, the United Methodist Church.

"Many other changes have occurred through the years -- our old pedal organ, the big wood-burning stove, the kerosene lamps, the palmetto fans, all have been " superannuated ".

"It is not possible to list all those who have contributed their faithful service and their money to our church activities, boards, the Sunday School, the youth, the missionary societies, the pastorate, and all other functions of the church, for they are legion.

"Here at this altar, many of us were received into the fellowship of the church, many loved ones have had their funeral services con¬ducted here, some of us were married here, and many happy times are remembered at Thanksgiving, Christmas, Easter, and other joyful occasions.

"So our past unrolls like a beautiful tapestry with some dark background threads of doubt, grief, disappointments and many, many bright threads of devotion, service, faith, and love. Those who have gone before have finished their part of the weaving. Now the shuttles are in our hands. May the tapestry we weave, under the guidance of our God, be a bold pattern, filled with the shining threads of faith, hope, and love.