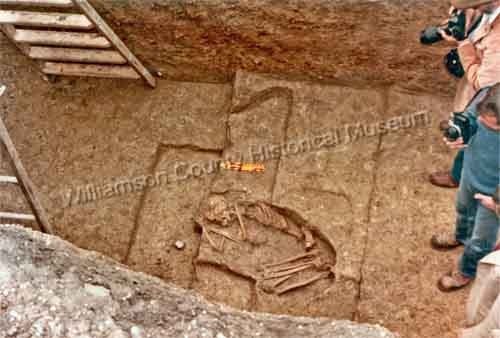 “Leanderthal Lady,” the prehistoric woman whose burial site was discovered in 1982 during construction. Carbon dating suggests “LeAnn” lived over 10,000-13,000 years ago. At the time of the discovery, her site was one of the earliest intact burial sites in the United States.

On Dec. 29, 1982, Texas Highway Department archeologists uncovered the skeleton of a pre-historic human female at the Wilson-Leonard Brushy Creek Site (approx. 6 mi. SE). Because of the proximity of the grave site to the town of Leander, the skeleton became known as the Leanderthal Lady. Carbon testing indicates the woman lived 10-13,000 years ago. She was about 30 years old at the time of death and measured 5′ 3″ in height. As one of the earliest intact burials uncovered in the United States, the site is a valuable source of information on the nation’s prehistoric past. (1985) 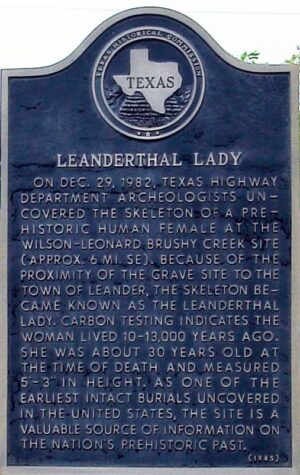 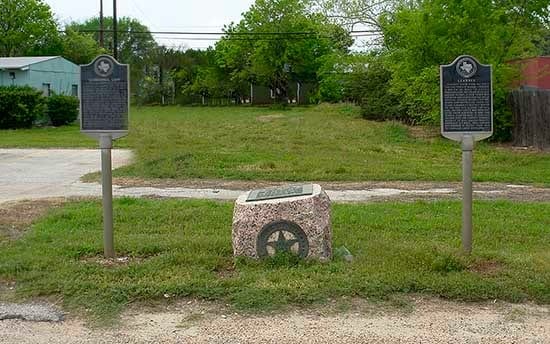 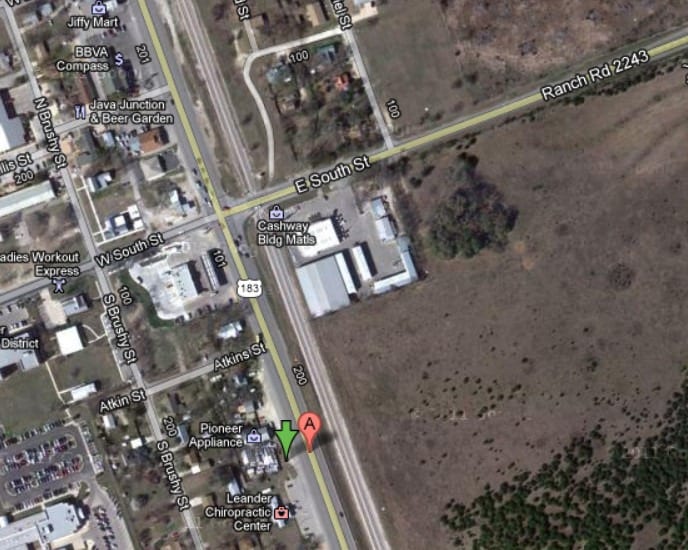 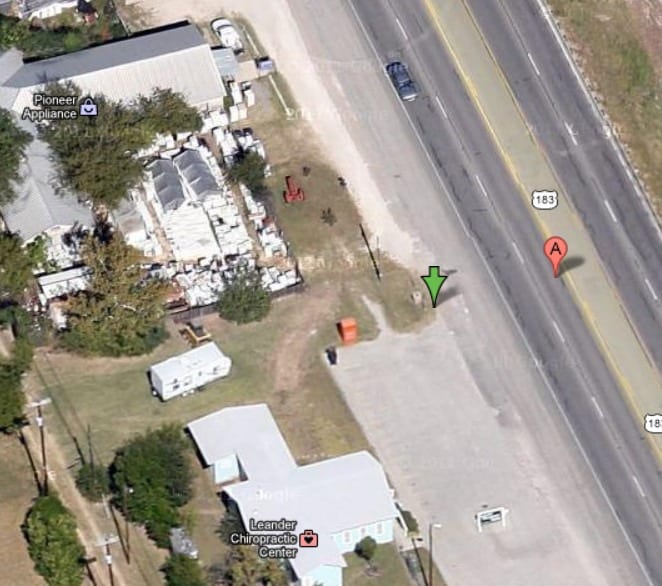 view more on the Markers and History 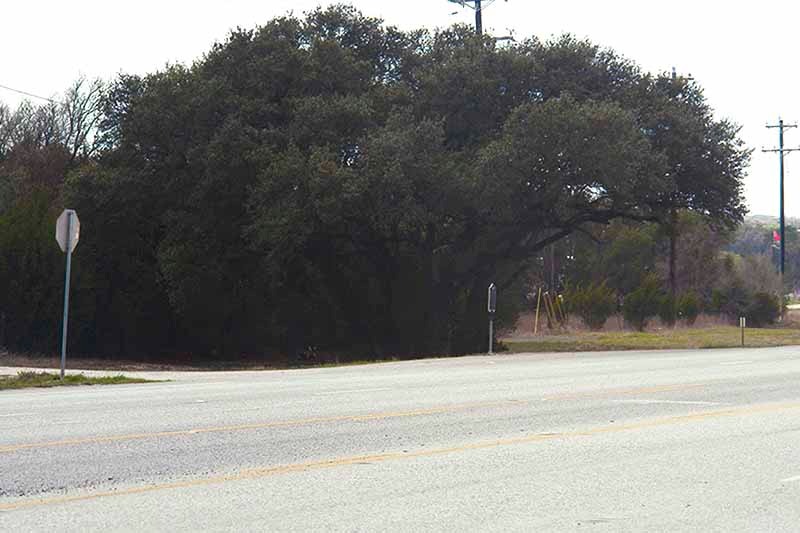 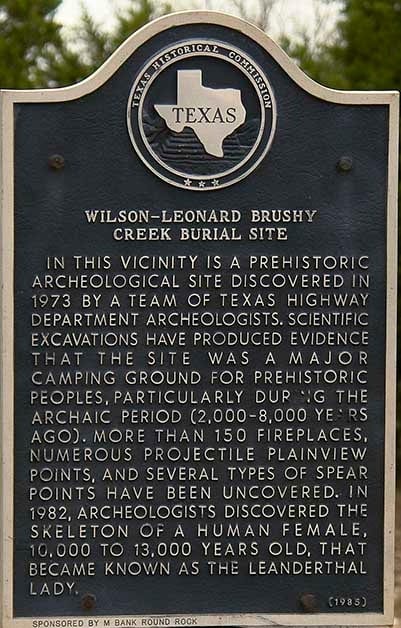 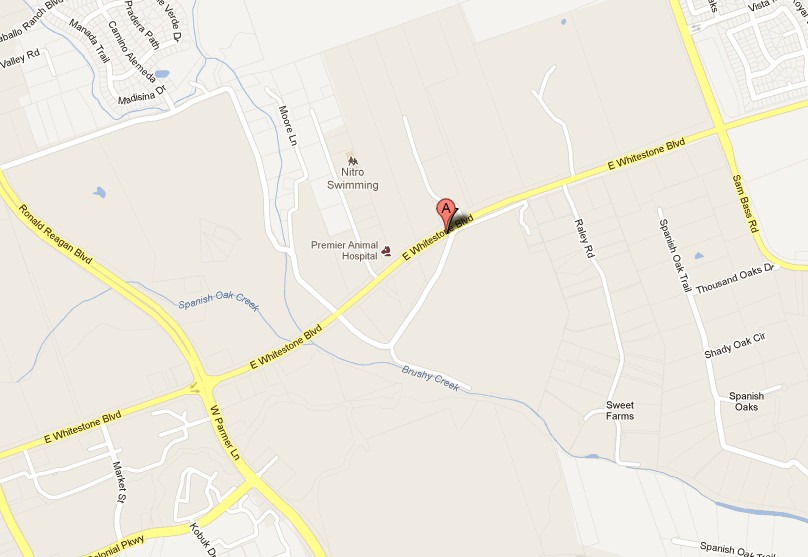 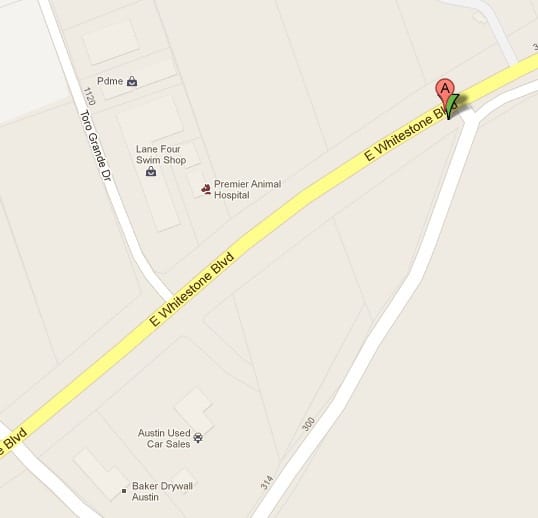 The location of the Wilson-Leonard Site 41-Wm.-235 was first discovered in 1973, when the Texas Highway personnel were in the process of conducting an archeological survey for a proposed extension of Ranch Road 1431, from Highway 183 to Highway 1-35, north of Round Rock, Texas. Evidence showed the ground littered with burned rocks, flint flakes, snail shells, and other evidence of cultural habitation. The Archeologist knew they were looking at a site that was occupied in prehistoric times.

The Site is located on a terrace above Brushy Creek, which is a part of the Brazos River Drainage System. This system is one of the major systems in Texas. Geologists are studying the entire Brushy Creek drainage area to determine how this area fits in the history sequence.

From 1973 to 1981, the Texas Highway Department planned, studied, negotiated, and surveyed the property for the road.

The excavation was started at the site in the summer of 1981. The site was laid out in a grid system of one-meter squares. The squares are uncovered in five-centimeter levels. The digging is all done by hand with a little garden or masonry trowels, light picks, and small instruments. All the dirt and debris are sifted and strained to make sure nothing is over-looked. It is a very time-consuming process. [1]

As digging continued, evidence proved that this was a major camping ground.

Wayne Young, site superintendent and field archeo­logist for the Texas State Department of Highways and Public Trans­portation, explained the important findings of the site.

Over 150 prehistoric fireplaces and deposits represented a long series of pre-historic living floors, which range from seven to nine thousand A.D.

Bola stones and vegetable grinding stones were found. There were planting and harvesting of food in some areas of the world nine to ten thousand years ago, but the Paleo or Ancient Indians of North America spent most of their time hunting and gathering. They were skilled hunters, but their major diet was vegetation. [2]

The Leanderthal Lady, found at this site, lived in the Pleis­tocene, (most recent), period.

A period which is lasting approxi­mately two million years. Archeology scientists had learned that the Paleo-Indian people first arrived in North America about 13,000 years ago, just before the land bridge disappeared underwater. Some archeologists think people may have entered North America even earlier. The Paleo-Indian people came from Asia to North America and then spread across the continent. It is believed that these people came to what is now Texas about 12,000 years ago. They came through Alaska and down the western side of the United States and on down into Mexico. They followed the mountains and streams where they could hunt for food and be near water. As the big game moved down the western part of the United States, the Indians followed. [3]

Many of the animals that the Paleo-Indians hunted are now extinct. Knowing when the mammoth, camel, and large bison became extinct helps the archeologist learn the Paleo-Indian sites' dates. Spear points used by Llano people have been found at sites where they killed a species of an elephant called Elephas Columbia, which is now extinct.

The Archeology of Texas and the United States is divided into three basic periods.

One is the late prehistoric, the middle one is the Archaic, and the oldest one is the Paleo-Indian period. All three periods were found at this site. The Archeologists deter­mined this by the artifacts found at different levels of the dig. The Archaic period is the most well-represented at this site. It represents the time period of the site between the time of Christ to about six thousand B.C., or between two thousand and eight thousand years ago. [5]

The digging continued through weeks and months. More and more artifacts and various other signs of primitive habitation were unearthed at the excavation, which measured 40 by 60 feet, and was already 12 feet deep.

On Wednesday, December 29, 1982, one of the most exciting archeological discoveries in the United States occurred when Archeologist Mike Davis, working carefully removing sediments from the pit, uncovered a human finger bone with his trowel. He called Wayne Young, dig site supervisor. Immediately, the dig crew was gathered around, looking down at three human finger bones. Wayne called Dr. Frank Wier, Director of Archeological Department of Texas Department of Highways and Public Transportation, who rushed to the dig site. The excited Archeology crew very gently loosened and removed the dirt from around the Leanderthal Lady's skeleton.

The human, female skeleton who was approximately thirty years old at death was buried with her arms cradling her head and her knees drawn upward.

She was approximately 5 feet 3 inches tall with a full set of teeth, except her third molar had erupted. At some time, she had broken her collar bone. As it healed incorrectly, it fused itself to her upper rib. This was believed to have been very painful and probably limited the use of her left arm.

She was immediately dubbed Leanderthal Lady by the Media. (because of the proximity of the gravesite to the town of Leander, Texas.)

Discovered in her grave was a round grinding stone of reddish sand-stone. Also, a shark's tooth is believed to have been worn around her neck. A small rodent's jaw bone was found in or near her stomach. There was a slight indentation in the skull, which is thought to have been caused by the weight of the many layers of earth that had accumulated on top of her grave through the years.

The contents of the burial pit were a light reddish color, and the soil outside the pit was a dark color. Carbon testing says she lived ten thousand to thirteen thousand years ago. [6]

The Archeologists can learn more from studying the skull than any other part of the body. To keep it from breaking up, they treated it with a diluted solution of glue, which made all the bones stay in place. The long bones were not treated but were lifted out, wrapped in tissue paper and foil, and placed in cardboard boxes. The hips and rib area, along with the skull, were all taken out of the burial site in blocks of skeleton and earth.

On January 9, 1983, the Leanderthal Lady's skeleton was re­moved from her pit grave into the lab where our scientists can learn more about our pre-historic people.

When the Archeologist made the initial site discovery, the soil scientist called to test the soil at various levels. They helped interpret the sequences of the dig site. Radio-carbon tests help determine the difference in the soil. When they reach sterile material, they are usually at the bottom of their dig.

There are only ten sites, nine thousand years and older, that contain human remains. Only three sites out of the ten have a de­finite disposition of burial of a body, and the Leanderthal Lady is one of them. [7]

The Archeologists at Baylor University in Waco, Texas, an­nounced, in February 1983, that they had been studying the remains of two complete skeletons, an ice age man and a 12 to 14-year-old child, dating back to the Paleo-Indian period. They were unearthed thirteen years ago in a cave twenty miles northwest of Waco, and about one hundred miles from Brushy Creek, on the banks of the Brazos River. [8]