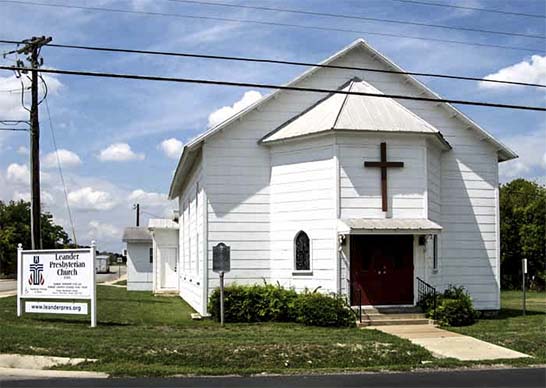 Organized in 1857 by the Rev. R. M. Overstreet, this church was originally known as Pleasant Hill Presbyterian Church and was located in the town of Bagdad. When the new railroad bypassed Bagdad in 1882 and the town of Leander was founded on the rail line, the church members voted to move their congregation to the new town. A church building was erected in 1884, on land belonging to church member Sarah J. Walker, who deeded the property to church trustees in 1895. Many descendants of early members remain active in the life of the church.

In 1517 the Protestant Reformation moved forward when Martin Luther nailed his 95 Theses to a church door in Wittenberg, Germany. Be criticized the pretentious authority of the Pope and called for direct authority from God.

In 1533, John Calvin, called the father of Presbyterianism, converted to Protestantism.

He interpreted the Bible as the revelation of God, emphasizing theology, worship, education, thrift, ethical behavior, and representative govern-Rent for his followers.

Through John Knox, a Scottish Protestant who studied with Calvin, the church spread.

In England, the "Westminster Assembly" of 151 Presbyterians worked steadily between 1643 and 1649 to write the doctrinal guides which Presbyterianism was recognized as basic texts.

One of the primary causes of the settling of America in the 17th and 18th centuries was religious freedom. Presbyterians from Europe settled in America in such large numbers that some British called the American Revolution the "Presbyterian Revolt". At least 14 signers of the Declaration of Independence were Presbyterians.

In 1706 the first presbytery in America was established in Philadelphia.

Other than scattered settlements of Indians, Texas did not prosper under the flags of Spain or France in the 16th and 17th centuries.

In 1821 Texas was under Mexican rule When Stephen F.. Austin brought 300 American families to settle the land. Although these pioneers were required to claim they would be Catholic, most were not and few followed this religious rule. In 1836 when Texas gained independ¬ence the basic right to follow your own religious beliefs was a primary goal established for this new republic. When statehood for Texas followed in 1846 the question of religious freedom was not an issue, it had already been gained ten years earlier. [2]

In just over ten years after Texas became the 28th state in the Union, settlers from North and South Carolina came to Bagdad in Williamson County and established the first Presbyterian Church in the area. On February 14, 1857, Reverend R. M. Overstreet organized an Old School Presbyterian Church at Bagdad on the headwaters of Brushy Creek. He had been preaching for about a year previous at Bagdad. [3] Bagdad was established in 1854 by pioneer settlers John F. Heinatz, Thomas Huddleston, Col. Charles C. Mason, Martin Jones Wells, Charles. Babcock, Henderson Upchurch, and William N. Carothers, most of whom had first settled In Austin, Travis County, prior to roving to this area on the western side of Williamson County. [4]

The church was first named "Pleasant Hill Presbyterian Church" and was to be attached to the Central Texas Presbytery (OS).

The vote for this name was unanimous. The name was selected because the church members had originally belonged to the Pleasant Hill or Ebenezer Presbyterian Churches of North and South Carolina. Currently, they were transferring membership from the First Presbyterian Church in Austin or Georgetown.

The first sermon on the day of the organization (2-14-1857) was from Matthew 9th Chapter 29th verse, "According to your faith be it unto you", and the following persons responded to the proposition to organize a church by presenting their certificates of membership in other churches:

Samuel D. Carothers was elected Ruling Elder on February 14, 1857, the day the church was established, and he was installed at the next meeting, which was the following day.

He had been ordained the same years before in South Carolina. The first communion service of this church and the first in the area was held the next day (Sabbath) following this organization.

It was Mrs. Walker who would later (37 years later) donate the land for the church when it moved to Leander.

On April 17, 1859, the following entry is found in the session record, "Session received Hester, servant girl of Samuel D.

Carothers on the examination -being a member of the Methodist Church in South Carolina for the same years and baptized by that denomination, was received to the communion of this church."

All of these early meetings had been held in Bagdad and in July of 1870, the session met at the schoolhouse in Liberty Hill. Mrs. Harriet Roddy, Mrs. E. J. Roddy, Miss Ellen Roddy, J. C. Park, and Miss Mary E. Park, Mrs. Rebecca Park were received as members.

In October 1870 the session was again resumed at Pleasant Hill in Bagdad and D. L. Emmett and P. A. Turk joined the church.

Mrs. Sarah J. Smith was received into membership on April 2, 1872. On July 7, 1872, J. C. Park and P. A. Turk were "elected and ordained as Ruling Elders of the Pleasant Hill Church". In September Bayliss Fletcher, John M. Turk and Mrs. Mary Murray joined.

Session of the Pleasant Hill Church at Bagdad met on March 2, 1873, and Mr. P. A. Turk was elected as a delegate to the Presbytery.

In 1874 Mrs. Edward Allen "presented a certificate of dismission from the Baptist Church and desiring to join this church was received". In 1875 Mrs. Sarah J. Allen, wife of Wilford Allen, and Mrs. E. L. Spencer, wife of William Spencer joined.

Several Sessions in these early years were held in Liberty Hill and it was in that town on September 4, 1875, that Miss Lula J. Walker joined the church. Again in Liberty Hill in October 1876, Mr. J. C. Park was appointed to attend the Presbytery meeting in Waxahachie and the Synod meeting in Dallas.

The year 1882 was important to the history of Bagdad.

The Austin and Northwestern Railroad was built and instead of passing through Bagdad, it was located one mile east. The new town was surveyed and named for railroad official Leander Brown (1817-1889). Homes and businesses from fluilLthe older community of Bagdad quickly moved to the new site along the rail line. The Post Office was broughtLeandernder fruit Bagdad that same year. [6]

On September 16, 1883, the following entry is found in the Session Minutes;

A congregational meeting of Pleasant Hill Church was held today (Sept.16) at Bagdad in the M. E. Church; the object of which was to consider whether they should under¬take to build a Presbyterian Church at Leander. The voice for it was unanimous. A committee was appointed to solicit subscriptions, consisting of James H. Faubion Esq., Mr-. R. C. Walker, Mrs. Belle Hughes, & Miss Emma Walker. Meeting adjourned. - - signed H. B. Rose

On March 7,.:1884 the session convened at Leander and they approved a petition to change the name of the church from Pleasant Hill to Leander. This same year, 1884, the present church building was erected, and later was practically destroyed, and rebuilt.

On July 12, 1886, Mrs. Mary Emma Linden and Miss Susie Walker joined the church. Mrs. Linden was dismissed by her own request on February 27, 1887, the same day Miss Maggie Faubion joined.

Dr. Robert F. Gribble served as pastor for many years until his retirement in the 1960s.

Dr. Gribble's service spanned 46 yearstipig2uWegOiation on the faculty of the Austin Seminary. The current pastor is Carl Eaton.

The church building has remained much the same since its construction in 1884.

An early fire caused some of the buildings to be rebuilt. The building has always been simple wood construction. The current blue arched windows were added sometime in the 1930s. The back rooms and the oak floor were added in the 1950s. By the late 1960s, new changes included beautiful oak railing & alter from the Burnet Presbyterian Church and new pews from a church in West Texas. The Ceiling was lowered and new lighting installed. In 1982 the two front stained glass windows were added, they came from San Antonio and were a memorial to all church members.

Today the congregation has over fifty members.

Ten percent of the operating budget is sent to the Presbytery for benevolent causes of Presbytery, Synod, and General Assembly. The church women meet monthly for Bible study and "caring committees," The ladies also quilt to earn money for church and community projects.

Through the years the congregation has remained rather small, and many of the current members descend twill those original families that founded this church 129 years ago.

New members of the Leander Presbyterian Church, along with the fifth and sixth generation family members, are helping this little church that was founded on the Bagdad prairie so long ago, grow, and move forward to the future.