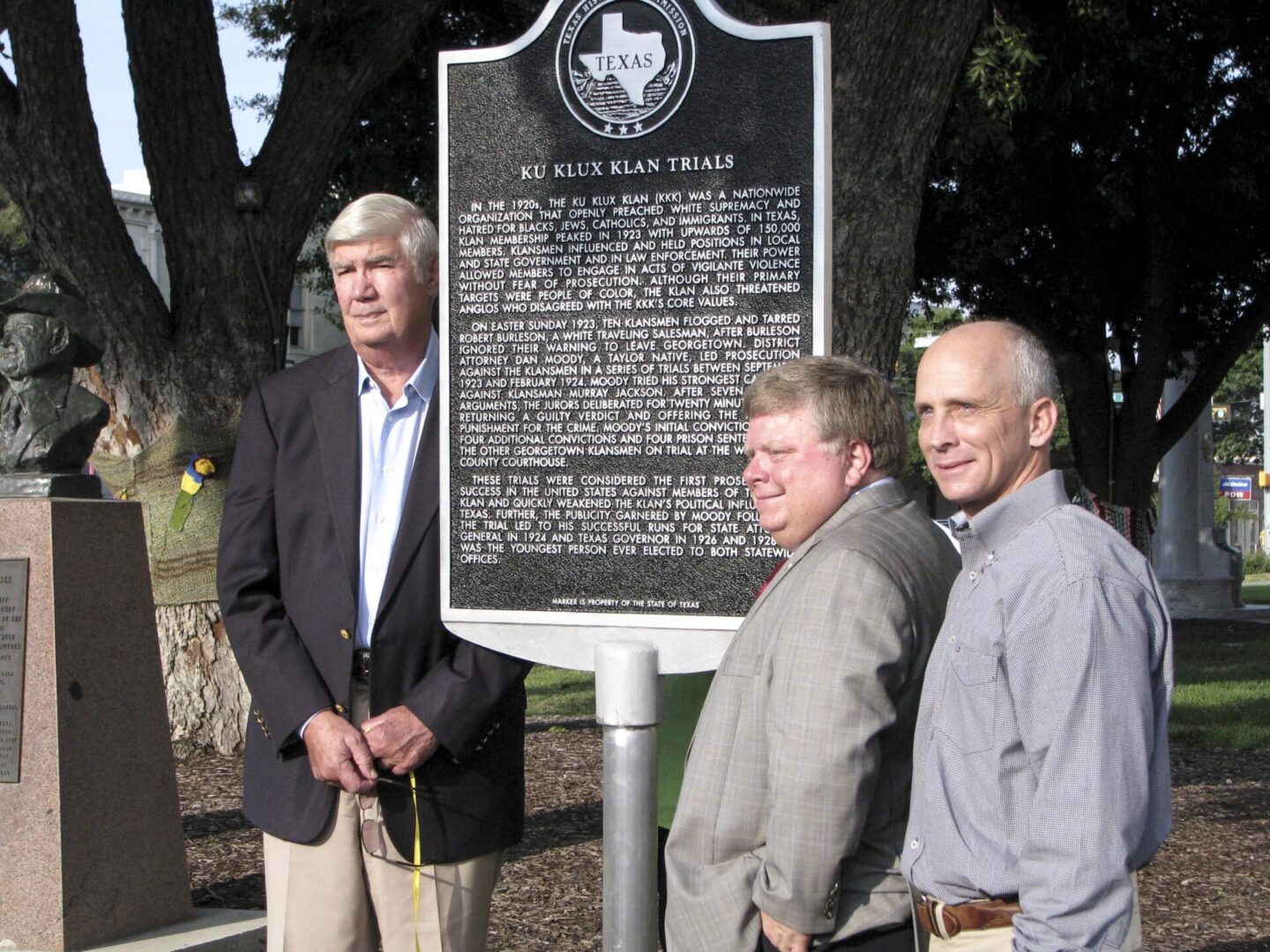 In the 1920s, the ku klux klan (kkk) was a nationwide organization that openly preached white supremacy and hatred for blacks, jews, catholics, and immigrants. In texas, klan membership peaked in 1923 with upwards of 150,000 members. Klansmen influenced and held positions in local and state government and in law enforcement. Their power allowed members to engage in acts of vigilante violence without fear of prosecution. Although their primary targets were people of color, the klan also threatened anglos who disagreed with the kkk’s core values.

On easter sunday 1923, ten klansmen flogged and tarred robert burleson, a white traveling salesman, after burleson ignored their warning to leave georgetown. District attorney dan moody, a taylor native, led prosecution against the klansmen in a series of trials between september 1923 and february 1924. Moody tried his strongest case first against klansman murray jackson. After seven days of arguments, the jurors deliberated for twenty minutes before returning a guilty verdict and offering the maximum punishment for the crime. Moody’s initial conviction led to four additional convictions and four prison sentences for the other georgetown klansmen on trial at the williamson county courthouse.

These trials were considered the first prosecutorial success in the united states against members of the 1920s klan and quickly weakened the klan’s political influence in texas. Further, the publicity garnered by moody following the trial led to his successful runs for state attorney general in 1924 and texas governor in 1926 and 1928. He was the youngest person ever elected to both statewide offices.

The 1920’s version of the Ku Klux Klan was a nationwide, secret organization that openly preached white supremacy and hatred for blacks, Jews, Catholics, immigrants, and law-breakers. At its peak in 1925 and 1926, it had up to three million members. It was active in all 48 states. Nationally, the Klan marched 40,000 strong down Pennsylvania Avenue in Washington, D.C. They were able to deadlock the 1924 Democratic national convention in New York City. The Klan virtually controlled state government in Indiana, Oregon, and Colorado. It controlled numerous city, county, and legislative offices in other areas of the country.[1] In Texas, the Klan’s membership peaked in early 1924 at 170,000. They elected Earle Mayfield to the U.S. Senate, controlled most courthouses and city halls in the eastern two-thirds of the state, and had a working majority in the Texas legislature. Because they often controlled the local law enforcement establishment, they were able to engage in vigilante violence without fear of prosecution. There were over 500 such acts of violence committed by the Klan in Texas from 1921-1923. Additionally, there were thousands of Klan warnings issued to other citizens threatening them with violence if they didn’t leave town or otherwise obey Klan orders.[2]

In the Travis – Williamson County portion of Central Texas, the Klan successively established klaverns in Austin, Taylor, and Georgetown during the spring and summer of 1921.

The Klan operated quietly as they took control of the Travis County law enforcement agencies. Both the Travis County Sheriff, W.D. Miller, and Austin police commissioner J.D. Copeland along with many deputies and officers were active members of the Klan. During the summer and fall of 1921, the Austin Klavern issued numerous warnings to leave town, and beat and tarred three individuals who defied their warnings. On September 2, 1921, 519 Klansmen, some armed, marched down Congress Avenue before the crowd estimated at 30,000. The Austin Klan’s reign of terror culminated with December 8, 1921, the murder of Peeler Clayton in an alley behind the Klan meeting place in downtown Austin just blocks from the Capitol building. Clayton was killed in a hail of bullets fired by numerous people. Although it defied logic to think that Klansmen had not committed the murder, a three-month grand jury investigation concluded the following April without a single indictment. On the eve of the grand jury’s first meeting, the Austin Klan staged a mass initiation of 700 new Klansmen. They invited newspaper reporters, who promised not to reveal names, to cover the event. A frustrated district attorney, Ben Robertson, resigned after a grand jury investigation failed to identify any of the murders.[3]

The Ku Klux Klan trials were held in the Williamson County Courthouse. They began on September 17, 1923, with the 7-day trial of Murray Jackson and concluded on February 1, 1924. District attorney, later governor, Dan Moody prosecuted four Klansmen for their roles in the kidnapping and beating of Robert Burleson, a white traveling salesman who had defied a Klan warning to leave town. Burleson’s beating on Easter Sunday, 1923, led to an immediate investigation by Williamson County Sheriff Lee Allen and Taylor Constable Louis Lowe. One hundred witnesses were called to the Williamson County courthouse during a two-month grand jury investigation in May and June 1923, which resulted in four Klansmen being confined for a month on contempt charges, numerous appeals, and, finally, three indictments against Klansmen involved in the actual beating.[4]

On September 25, 1923, as the eyes of Texas and the nation watched, a courageous jury of twelve Williamson County citizens returned a guilty verdict and a maximum 5-year prison sentence against Murray Jackson the first Klan defendant.

Two other Klansmen Olen Gossett and Dewey Ball eventually pled guilty and received one-year prison sentences. Moody used the Jackson verdict to convince five Klansmen to tell the truth and become the state’s witnesses. Armed with their testimony, Moody went back to the grand jury and obtained a perjury indictment against A.A. Davis, Klan leader who had delivered the warning to Burleson and lied about it to the original grand jury. In another dramatic jury trial, he obtained a perjury conviction with a two-year prison sentence against Davis.[5]

The four convictions and prison sentences were likely the first prosecutorial success anywhere in the United States against members of the 1920’s Klan.[6] While that alone is noteworthy, Moody followed up on the trials and resulting publicity by taking on the Klan on a statewide basis. It was well-known that the Klan’s election goal in 1924 was to elect Klansmen to the three top state offices—governor, lieutenant governor, and attorney general. Moody ran for attorney general. He used the publicity of the trials to turn Texas public opinion against the Klan. He engineered a massive electoral defeat of the Klan in the 1924 elections which resulted in his election as state attorney general. The New York Times would later describe that election victory as “the death-knell of Klan domination”[7] in Texas. Although the Klan continued as a power for two more years in the other 47 states, the dramatic legal defeat of the Klan in the Williamson County courthouse and the 1924 elections, effectively ended the power of the 1920’s Klan in Texas and encouraged Klan opponents in the rest of the United States.

[6] Earlier in 1923, twelve members of the Goose Creek Klan had paid $100 fines for the kidnapping, flogging, and tarring of a man and woman near Houston. The Klansmen thought it was a good trade-$1,200 to clean up a town-and rightfully declared it a Klan victory. Three weeks after the Murray Jackson conviction, an Amarillo jury sentenced the leader of a flogging party to two years in prison; his conviction was reversed on appeal. As for whether the Jackson case was the first prosecutorial success in the nation, it is difficult to determine with absolute certainty. A review of numerous secondary sources fails to show an earlier felony conviction, but none of these sources contained any real discussion of prosecution successes. They do chronicle some spectacularly failed prosecutions, such as the lack of felony convictions after the mini-war that broke out when Klan forces invaded the anti-Klan town of Mer Rouge, Louisiana. New York Times article in 1926 about Moody states that the four Burleson convictions constituted “one of the first successful prosecutions of Klan law violators in any state.” No details of other prosecutions were given. Whether this was an example of imprecise writing by a reporter who was on deadline is hard to tell. But whether Jackson was the first or one of the first, it is certain that it was the first conviction that was followed up by a statewide election victory and the destruction of the Klan in an entire state. Austin American, October 12, 1923; State v. T.W. Stanford, 268 Southwest Reporter 161; Alexander, Ku Klux Klan in the Southwest, 63 (Goose Creek), 68-74 (Mer Rouge); New York Times, September 12, 1926.