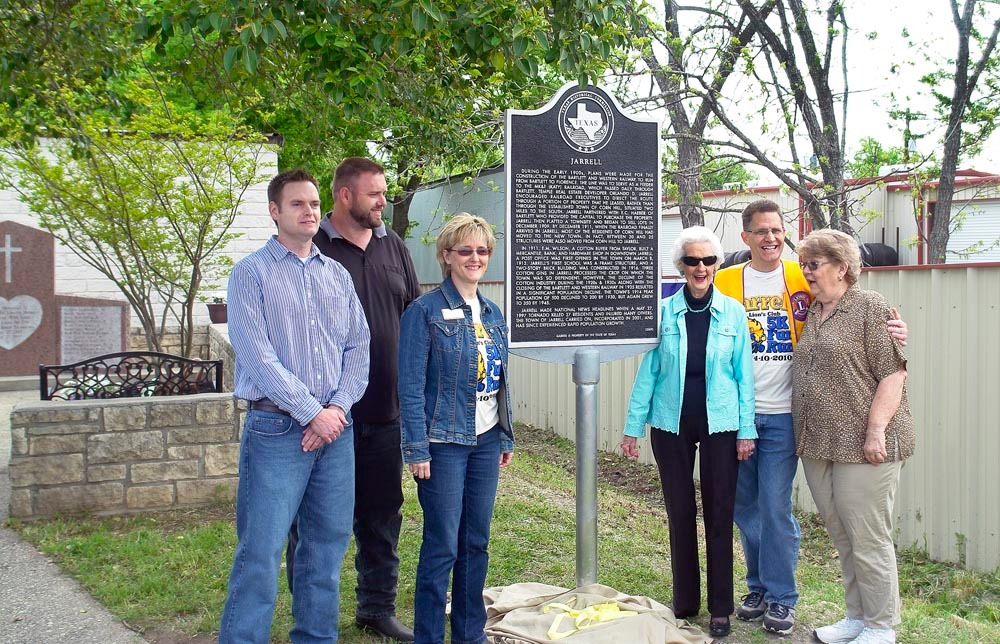 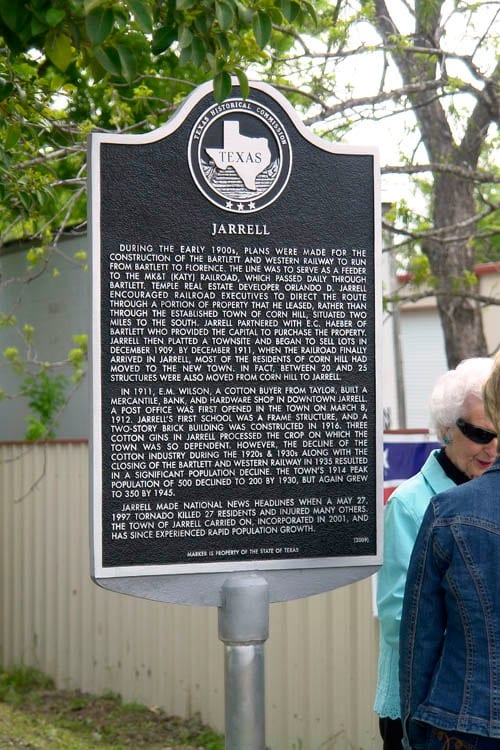 The unveiling of the Marker and Comments by Mayor Troy Clawson

During the early 1900s, plans were made for the construction of the Bartlett and Western Railway to run from Bartlett to Florence. The line was to serve as a feeder to the MK&T (Katy) Railroad, which passed daily through Bartlett. Temple real estate developer Orlando D. Jarrell encouraged railroad executives to direct the route through a portion of property that he leased, rather than through the established town of Corn Hill, situated two miles to the south. Jarrell partnered with E. C. Haeber of Bartlett who provided the capital to purchase the property. Jarrell then platted a townsite and began to sell lots in December 1909. By December 1911, when the railroad finally arrived in Jarrell, most of the residents of Corn Hill had moved to the new town. In fact, between 20 and 25 structures were also moved from Corn Hill to Jarrell.

In 1911, E. M. Wilson, a cotton buyer from Taylor, built a mercantile, bank, and hardware shop in downtown Jarrell. A post office was first opened in the town on March 8, 1912. Jarrell’s first school was a frame structure, and a two-story brick building was constructed in 1916. Three cotton gins in Jarrell processed the crop on which the town was so dependent. However, the decline of the cotton industry during the 1920s & 1930s along with the closing of the Bartlett and Western Railway in 1935 resulted in a significant population decline. The town’s 1914 peak population of 500 declined to 200 by 1930, but again grew to 350 by 1945.

Jarrell made national news headlines when a May 27, 1997 tornado killed 27 residents and injured many others. The town of Jarrell carried on, incorporated in 2001, and has since experienced rapid population growth. (2009) Marker is property of the State of Texas

The Bartlett Western chartered as the Bartlett-Florence Railway Company on Sept. 15, 1909, was the last railroad constructed in Williamson County with the hope of investors that the enormous cotton traffic of the county would make the line prosperous. Bartlett Western founders bypassed the community of Corn Hill with 11.2 miles of track running from Bartlett west to the present site of the town of Jarrell, turning the once-thriving community of Corn Hill into a ghost town.  In turn, Jarrell was established as one of Williamson County’s newest and most promising communities in 1909. [1] [9]

The railroad and cotton commerce helped put Jarrell on the map from 1909-1920, but the decline of the cotton industry in the 1920s and 1930s along with the closing of the Bartlett and Western in 1935, resulted in a significant population decline. Many of Jarrell’s original downtown structures are still intact and in use today. A recent resurgence in the popularity of Jarrell began in 2000 and has resulted in a population boom. As a result, almost 2,500 residents now call Jarrell home.

The community of Jarrell is located on Donahoe Creek at the intersection of IH 35 and Farm FM 487, two miles south of the Bell County line in northern Williamson County. Jarrell was named for real estate developer O. D. Jarrell of Temple. Jarrell and E. C. Haeber of Bartlett founded the town in 1909 at the intersection of the old stagecoach road and the proposed right-of-way of the Bartlett and Western Railway. The railroad reached the town soon thereafter. A saloon and two stores were operating in 1910, followed by a bank and a weekly newspaper, the Jarrell View, in 19ll and a post office in 1912. The town of Corn Hill, a mile south of the newly proposed townsite, moved to Jarrell when residents realized that Corn Hill had been bypassed by the railroad. [1]

By 1914 a prospering community, Jarrell reached a population of 500 and had waterworks, electric lights, a movie theater, and a hotel. With the decline of the cotton industry in the 1920s and 1930s and the closing of the Bartlett and Western in 1935, Jarrell experienced a decline. In 1933 Jarrell had declined to a population of 200 and eighteen businesses. The community revived to an estimated 350 inhabitants and twenty-one businesses in 1945. From 1964 to 1990 the population of Jarrell was reported as 410. [1]

On May 27, 1997, Jarrell made national news when a tornado killed twenty-seven people and injured many others. This tornado was one of six Texas tornadoes since 1950 that has been recorded in the F5 category. The Jarrell tornado had winds between 261-318 miles per hour. [2] By 2000, Jarrell had reached a population of 1,000.  Currently, the population of the community is 2,400 and growing with new infrastructure, homes, and developments focused on the east side of IH-35 [1] [3]

In December of 1909, the first lot was sold in the Jarrell Townsite.  The town as we know it today is Jarrell, Texas.  It was named for Orlando D. Jarrell, a real estate broker from Temple, Texas. [5]    Some of the last platted lots were sold to F. R. Conlee by Jarrell in 1916. [8]

Prior to 1909, the primary town in northern Williamson County, Texas, was Corn Hill.  At one time, it was a prosperous village of over 500 residents.  It was located two miles south of present-day Jarrell, Texas.  In 1909 a short line railroad was proposed to run from Bartlett, Texas to Florence, Texas.  It was to serve as a feeder line to the Katy Railroad, which passed daily through Bartlett.  Residents assumed that the line would run through the town of Corn Hill, even though some were against it.  [9] O.D. Jarrell and E.C. Haeber of Bartlett saw an opportunity and proposed that the railroad run north of Corn Hill through what was known as the Jarrell Lease.  The residents of Corn Hill were surprised when the railroad bypassed their village and intersected with the highway two miles to the north.  The two hundred acres known as the Jarrell Lease was changed to the Jarrell Townsite.  In 1909 the lots were laid out, platted, and on sale.  Free barbeque and fish fries were held each Saturday, accompanied by convincing talks about the opportunities of the future.  The lots were soon sold.  By the end of 1911, when the Bartlett-Western Railway had become a reality, practically every family had moved their residence from Corn Hill to Jarrell. [9]

There were also many structures constructed during the founding of Jarrell that helped the town prosper. Mr. Wilson, a cotton buyer from Taylor, Texas, invested his money in building the mercantile building and the bank building.  He also built the hardware store.  The mercantile and bank buildings still exist today, and pictures are attached.  All of these were completed in 1911.  The mercantile building sold clothing, groceries and had a doctor’s office.  The hardware sold furniture, building materials, and caskets. [5]

The Glass Hotel was constructed in 1912 and was owned and operated by the Glass family.  It was known for its excellent food and warm hospitality.  Drummers and salesmen would plan their schedules so as to have meals and lodging at the hotel.  [5]

The Post Office was moved from Corn Hill on March 8, 1912.  The building itself was moved several times and currently exists as a beauty shop.  [6]

Each family provided their own water in the early days.  Soon a well was drilled, and the townspeople organized the Jarrell Water Works.  Today it is known as the Jarrell-Schwertner Water Company. Sometime during the first years of Jarrell, V.A. Harvill installed the Delco System, which furnished electric lights for the city.  [5]

The first school in Jarrell was a wooden building.  In 1916, a brick building was constructed where it still stands at N. 6th Street.   This building has been in continuous use as a school to the present day, where it currently serves as Jarrell Middle School.  [5]

The First State Bank was chartered in 1909 and occupied the same location until 2008, when it moved to its new location.  The bank is known as Eagle Bank today.  [7]

Jarrell has had three cotton gins that supported the heavily cotton farming activity of the community, but all of them burned.  The last cotton gin was torn down in the 1960s. It was located at the present site of the Jarrell School Administration building on Fifth Street. [6] The Jarrell Volunteer Fire Department was started in the early 1950s and is still active today.  [5]

There are two historic cemeteries serving the community of Jarrell.  The Corn Hill Cemetery is located two miles south of Jarrell and was established in 1886 on a two-acre site deeded to Corn Hill Masonic Lodge No. 567 by Mr. and Mrs. B. F. Bridges. Interred here are community leaders, three Civil War soldiers, and veterans of other wars. It has been maintained by the Corn Hill Cemetery Association since 1953. The other significant cemetery is the Land Cemetery, located one mile northwest of Jarrell. The Land Cemetery was established in 1863 with the burial of John J. Land. [4]

Jarrell is a prime example of a Texas community that almost did not survive the decline of the Texas cotton industry in the 1920s and 1930s but is now experiencing rapid population growth. The downtown and surrounding residential areas retain much of the city’s original early 1900s character. Many of Jarrell’s historic structures are still intact today and are currently used as modern businesses and residences. Some of the original historic structures that are in use and serve as contributing elements to the historical context of Jarrell include:

-First Baptist Church (moved to Jarrell from Corn Hill in 1912)

-Jarrell Methodist Church (moved to Jarrell from Corn Hill in 1913) In 1925, a wind destroyed the building, and in 1926 the current building was constructed from the existing timbers.

Today the community is growing at a rapid pace. In 2001 the City of Jarrell became incorporated, and citizens elected their first City Council and Mayor.  Downtown Jarrell and many of the structures within still stand as a reminder of the county’s once-thriving railroad and cotton industry. Jarrell retains many historic small-town characteristics but is experiencing rapid development and growth. The Jarrell City Council and concerned citizens are seeking to promote Jarrell’s past by continuing to preserve the existing historic structures and ensuring that new residents are aware of the community’s rich historical heritage.

[11] Photographs from the collections of C.B. and Mary Hodge, Fred and Eva Lee Harrison, Floyd and Claudia Goode, and Priscilla S. King.