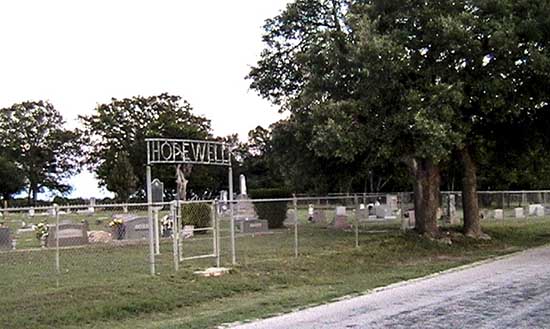 Pioneers who settled here in the 1840s and established the town of Hopewell faced many hardships, including Indian raids. Wofford and Mary Johnson and their daughter were killed by Comanches nearby in 1863. They were buried at this site near the grave of Cornelia Johnson, whose burial is the first recorded here. The graveyard was deeded to a local congregation in 1877 and in 1966 a cemetery association was formed. Buried here are area pioneers and their descendants, and veterans of the Civil War. This cemetery is all that remains of the Hopewell community.

Still sparsely populated, the placid rural countryside of far western Williamson County belies its grim and turbulent past. However, the neatly manicured old Hopewell Cemetery on County Road 284, where the Wofford Johnson family cenotaph and no fewer than thirty infant graves can be found, chronicles the bitter hardships endured by early pioneers in this region. But for this cemetery, no other trace remains of the once-thriving town of Hopewell.

A part of the Rebecca Burleson Survey, Hopewell was originally known as Burleson Springs.

[1] It is said to have received its new name from the Reed family of Hope, Arkansas, [2] who were among the first settlers here. At least a decade before Williamson County was formed in 1848, Protestant Anglo-Saxons had begun to settle along the original Austin-Burnet road
in the southern region of what was known as Shin Oak Ridge. Along the streams, early homesteaders found small pockets of black soil suitable for raising crops to feed family and cattle, and for cotton to be corded and woven into clothing. A rugged terrain encompassing approximately 300 square miles in western Williamson and eastern Burnet counties, the Ridge was densely covered with small brushy trees which provided ideal cover for Indians. [2] Having invaded a favorite hunting ground of the fierce Comanche tribe, the settlers lived for many years under constant threat of sudden Indian raids.

Over thirty years had passed since the infamous Webster Massacre on June 20, 1839, when the last brutal Comanche raid in Williamson County took place at Hopewell during the Civil War. Several accounts of the incident vary in detail. Here, we have relied more heavily on the account of Mrs. C. C. Proctor, a niece of Mr. Johnson, who was living with the Johnsons at the time of the incident. [3]

Late in the afternoon of August 15, 1863, Mr. and Mrs. Wofford Johnson and their three children were returning to Hopewell on horseback.

Only a few hundred yards from their house, they were attacked by a party of warriors led by Comanche Chief Big Foot. Mr. Johnson and his daughter, Mary Jane, were killed instantly. Mrs. Johnson, with baby Georgiana in arms, and daughter Elvira astride the same horse, was able to flee a short distance before she too was slain. Five-year-old Elvira managed to dismount and run to safety. The following morning Baby Georgiana was found alive, cradled in dense underbrush. [3]

Capt. Jeff Maltby, a Texas Ranger living in the vicinity, organized a posse that night and set off early the following morning in pursuit of Big Foot.

Unsuccessful in his attempt to catch up with the Indians, the search did not end until nine years later when Capt. Maltby encountered and killed the chief in Runnels County. With Big Foot, that day was his lieutenant, Jape, who confessed to the Johnson massacre as he lay dying of wounds inflicted by Ranger Henry Sackett. [2]

The Johnsons and little daughter, Mary Jane, were laid to rest near the grave of Cornelia Johnson (1821-1859) in what was then known as the "Enoch Johnson Graveyard". [3] Marking their graves is a single tombstone inscribed simply, "Wofford Johnson, wife and Little Pau. massacred by the Indians Aug. 15, 1863". Mrs. Johnson's name is said to have been Mary. [14]

Wife of Enoch S. Johnson (1814-1889), Cornelia Jane White was born in Alabama in 1821 and had come to Texas in 1842 with her father, Gideon White. [4] The oldest marked grave in the cemetery, Cornelia's is one of sixteen markers inscribed with the Johnson name.

Shortly after Anna's death, their son, Eugene E. Gallatin, made the first known survey of the cemetery in 1915. [5] Even at that early date, he listed nine "unknown" gravesites. Many of the old headstones bear only names without dates, making it impossible to positively determine the earliest burial. However, no existing tombstone predates that of Cornelia Johnson. In the old Hopewell Church records [6] Cornelia's date of death is given as 16 February 1862; not 1859, as her marker reads.

The second recorded burial is that of Elizabeth White.

Some speculation exists as to whether or not the present cemetery is the original "Enoch Johnson Graveyard", however, Mrs. Proctor's account of the massacre [3] seems to confirm it was.

A deed dated May 14, 1877, records the sale by A. P. Wagoner and wife, M. L. Wagoner, to representatives of Hopewell Congregation of the Cumberland Presbyterian Church (E. S. Johnson, D.C. Reed, Henry Price, Robert Renick, and D. W. Lyle) that part of their homestead "known as Hopewell Grave Yard". [7]

Twenty-five tombstones bear the Renick name. Burton L. Renick (1800¬-1873) and wife, Susan [Price] Renick (1806-1896) were natives of Kentucky who first moved to Missouri. With their children, they arrived in Hopewell [8] before 1860, and are related to the Price, Brewer, and Ottinger families [9] buried here. As one might expect in such a small and isolated community, most of the Hopewell families were related either by blood or through marriage.

Etched on twelve tombstones is the name of Jones, marking the graves of Bennett Jones, Sr. (1804-1894) and his family.

Another twelve stones bear the name of Thornton. Daniel M. Thornton (1832¬-1922) arrived in Hopewell around 1867 with his wife, Margaret (1840-1888), to join his mother and other members of the family who had arrived the previous year from Missouri. Daniel's brother-in-law, Capt. Thomas William Royston practiced medicine in Hopewell until 1873 when he moved to Round Rock. Daniel's nephew, George Washington Thornton (1853-1937), was ordained deacon in the church in 1894. Members of the Thornton family married Conways, Mitchells, Brewers, and Ottingers. [10]

The Johns family is represented by eleven tombstones, the earliest burials being those of Martha Sarah Ann Johns (1866-1918) and her husband, Edmond Daniel Johns (1869-1936).

Born in Scotland, David arrived in New Orleans in 1866. He married in Travis County in 1870 and moved to Hopewell the same year. An elder, superintendent of Sunday School, and Past Master in the Masonic Lodge, he also served for eight years as Commissioner of Precinct 2. [11]

In the northeast corner of the cemetery (Plot No. 7), an updated tombstone marks the grave of James Washington, the only black buried here. [9]

Other families buried here are Williamson, with eight markers; Conway and White with seven, six Witcher, five Owen and Gilbreath, four Gardner, three Brewer, Dayton, Eppright, Gaulden, Peck, and Proffitt, to name only a few. When the latest survey was completed in 1978, two hundred and twenty-nine graves were listed. [15]

Other than a reference by Mrs. Proctor of a "negro who belonged to" the Johnson family, [3] no evidence has been found that the Hopewell farmers were slave-owners, though most of the able-bodied men in the community did join the Confederate cause. Besides Enoch Johnson and Bennett Jones, veterans of the Civil War known to be buried at Hopewell are Thomas Brewer (1837-1920), Edward Conway (1828-1894), N.A.J. Gardner (1825¬1914), and A.D.T. Williamson (1845-1918). The Presbyterian Church Register of Communicants lists members James Elliot, Hughey McNew, Alla Y. Gibson, and Alexander Williamson as casualties of that war. Though not named in the register, Mark Shannon and Hiram Jones also lost their lives in battle. [9]

The Hopewell Congregation of the Cumberland Presbyterian Church was organized on October 6, 1855, with twenty-six charter members from the Barton, McFarland, Jones, Tishbrooks, Jennings, Howard, Owen, Smith, Fowler, Hill, Newton and Beabout families. The first meetings were held at the "Hopewell Campgrounds". Rev. J. W. Smith was the first pastor, with Samuel McFarland, Samuel Howard, Bennett Jones, John Barton, and B. F. Owen among the first elders. Early deacons included N. A. J. Gardner (1825-1914), Taylor Stirling (1820-1890), Henry Price and John M. White (1827-1892). [6] Services were held under a brush arbor adjacent to the cemetery until about 1869 when a tall, one-story church building was erected. [1] In 1891, a new church building was completed and fully paid for. In 1895, the church rented ten acres of land on which they planted cotton, using the proceeds to paint the building and add a bay window. [9]

Less than a fortnight before his fatal encounter with the Indians, Wofford Johnson had met with his neighbors on August 3, 1863, to organize Mountain Masonic Lodge No. 277 in Hopewell.

By 1878, the town consisted of a church and school, a general store, a lodge, and a saloon. After the Narrow Gauge line of the Austin and Northwestern Railroad Company was built from Austin to Burnet in 1881, a post office was established. C. C. Black became Hopewell's only postmaster, serving from June 26, 1882, until the post office closed on September 11 the same year. [1] Born on his parents' farm near Hopewell in 1856, Dr. Black also served the community as a physician for several years before moving away. [12]

The town began a gradual decline after a new Austin-Burnet road by-passed Hopewell in the latter part of the 19th century, [2] By the early 1940s, as the young left to serve in World War II or seek employment in the city, the decrease in population had reached such proportions that the town could no longer support the school and Masonic Lodge. Both consolidated with Liberty Hill in 1945. [1] Where the town once stood, now stately oaks, a new tabernacle, and a few modern farm homes dot the countryside near the cemetery.

In 1966, descendants of those interred in this graveyard met and formed the Hopewell Cemetery Association. Directors were D. W. Mitchell, Finnis, and H. A. Johnson, J. R. Johns, and D. H. Gardner. [13] Gwendolyn Ricketson is the current president. Members gather each year in June for "dinner on the grounds" much like their forefathers almost a century and one-half ago.

The meticulous care with which this group maintains the cemetery, one of the oldest in Williamson County still currently in use, serves as notice that the brave pioneers buried here will not soon be forgotten. The courageous families who contributed greatly to the settlement and formation of our county deserve recognition with an official Texas historical marker reminding those who happen along this road of that distant time in our history when Indians and buffalo roamed on Shin Oak Ridge while dauntless men and women cleared farmlands, built roads, schools, and churches - their progeny to become our teachers, doctors, ministers, lawyers, politicians, farmers, and soldiers.

Researched and compiled by:
Irene Varan