History Of The Hutto Texas Community

A special thanks to Mike Fowler for letting us
post this first person story - from the book.

A special thanks to The Georgetown Heritage Society and Martha Mitten Allen for letting the us post these wonderful first person stories.

Prior to Hutto being settled, the first two stores in Williamson County were located on Brushy Creek in the Shiloh and Rice's Crossing communities, just southeast of present-day Hutto. Many of Hutto's early settlers came from that area.

Historically, Hutto was not really established until 1876 when the International & Great Northern Railroad passed through land owned by one James Emory Hutto, and the fledgling town was named for him. The railroad officials designated the stop Hutto Station, and the town of Hutto was born. James Hutto was born in Alabama on June 8, 1824; he came to Texas in 1847 and moved his family into Williamson County in 1855. It was in 1876 that Hutto sold fifty acres to the Texas Land Company of New York for a townsite and railroad right of way. Cheap prison labor was used to build the railroad tracks under the Texas prison lease system that was in effect at that time. Hutto had become a wealthy cattleman in Williamson County; however, in 1885, he left Hutto and moved to Waco and entered the hardware business. No direct descendants of the Hutto family live here today. A freed slave, Adam Orgain, was probably the first settler in the immediate vicinity and had homesteaded earlier in 1854. Indians still abounded in the area. Other early settlers in the area were the Carpenter, Davis, Evans, Farley, Goodwin, Highsmith, Johnson, Magle, Payne, Saul, Weight, Womack, and Wright families. Other people living in Hutto during the 1890s included the Bub Arrnstrongs, the Dahlbergs, M.B. Kennedy, the Hugh Kimbro family, William McCutcheon, Green Randolph, J.B. Ross, and the Tisdales. Soon a great many more people, primarily Swedish and German immigrants, came to this area to farm and ranch and began new lives in America.

The first store owner for the south side business center was Mr. Lloyd, followed by Davis, Blanton, Hudson, and Robinson, who built various kinds of stores.

On June 19, 1886, a severe storm hit the small town and wiped out the south side business district, including the first school (built-in 1882) and the Baptist Church (built-in 1883).

It was not until 1890 that a real rebuilding effort took place, this time on the north side of the railroad tracks, and by 1892 two rows of store buildings surrounded East Street, the new main street of downtown Hutto. During the early 1890s, as Hutto prospered and grew due to the fertile Blackland soil that permitted tremendous cotton production on the surrounding farms, the establishment of cotton gins and community activity abounded. The soil in the Hutto vicinity was described as "mainly a deep, dark hog-wallow," which grew excellent crops. One of the earliest gins was owned by a Mr. Brown and a Mr. Aten about 1890; Mr. Cato owned another gin, John R. Hutto and John Flinn owned a gin together and Mr. Holman and Mr. Short built their gin soon after these other gins were established. Saturdays were an extremely active time in downtown Hutto with people and horse-drawn vehicles everywhere. The comment was made by an observant citizen; "No one had better get in a hurry in Hutto on a Saturday because you just couldn't move fast through all the crowd in town. It was reported that a merchant once took in $5,000 on a Saturday in his Hutto store.

On July 21, 1894, a tornado destroyed the Swedish Evangelical Lutheran Church of Hutto (built-in 1892) and other structures.

Saturday shopping on Main Street (later named East Street) was, as previously described, a very busy activity in the early days of Hutto. Look at the number of business establishments at this time.

By 1898 thanks to the industry of its people and its strong agricultural base, the town of Hutto was bustling and had grown to support six churches, one school, one photography gallery, one confectionery store, one hotel, two drug stores, seven dry good stores, one bank, one tailor shop, one shoe shop, four blacksmiths, eight grocery stores including one meat market, one livery stable, one millinery shop, one lumber yard, one newspaper, two hardware stores, two cotton gins, one grist mill and five doctors. The first bank was a private institution owned by Woolsey and Carpenter, It was later bought by E.P. Wilborn and became the Farmer and Merchants State Bank. Later the Hutto National Bank was established and the Hutto community had two banks.

Harry Mauritz, a member of Hutto Lutheran Church, was a banker at this time. Early business enterprises were Hutto Hardware owned by J.T. McCutcheon and W.E. Chapman; Oatts and Christian Hardware; Jim Holman, Will May and Carl Hanson furniture store; Bland and Will Harrison dry goods and grocery store; Will Tompkins and Frank Dahlberg general merchandise store; J.P. Saul, Sr. general store; and Neils Larsen blacksmith shop. The doctors in Hutto in the 1890s included Drs. Percy, Harper, Nowlin, Howze and McCowan. An earlier practitioner in Hutto had been Dr. Flinn. There was also a dentist in the 1890s named George Bruce. In 1902 a fire destroyed almost all of the east side the businesses on East Street in the downtown area.

This fire decimated much of the business of downtown Hutto as the north half of the east side on Main Street was destroyed. The fire started when a gasoline stove exploded in the Jackson Restaurant.

Later in Hutto history there were interesting enterprises such as the Good Luck Potato Chip Company, a funeral parlor, the Hutto Bottling Company, an outdoor theater, and a variety of both everyday and unusual businesses. At the turn of the century, one of the young Juvenal men of Swedish heritage who lived in the Hutto area became a professional boxer, he changed his name to Billy Ryan and became the world light heavy weight boxing champion.

On July 17, 1911 the town was officially incorporated and W.D. Holman, a member of the Swedish Evangelical Lutheran Church, served as the first mayor of the City of Hutto. Another Swede, Charles E. Hanstrom, Sr. played an extremely vital role in the development of early Hutto. Hutto might not have incorporated had Hanstrom, along with J.D. Tinning, not installed the Hanstrom & Tinning Water Works in 1910 through his purchase of a drilling rig with which he drilled the first deep water well in our town. This was a phenomenal year for Charles Hanstrom, for in 1910 he also built the first power plant for Hutto installing wires and poles and placing wiring in homes, additionally he started the first ice factory for our community and was also partners with Mr. Tinning in a cotton gin. It was this same James D. Tinning that had invented a better cotton planter in 1897 for which he received patent No. 591,613 from the United States Patent Office.

HUTTO AS A COTTON COMMUNITY

This photograph of the Hanstrom and Tinning Gin owned by James D. Tinning and Charles E. Hanstrorn, Sr. shows cotton bales in the wagon and on the dock. Cotton is still a primary cash crop in the Hutto community and Williamson County.

In spite of World War I , the City of Hutto and surrounding community had a bright future-cotton was still king- until 1929 and the collapse of the stock market. A long, hard depression had begun. The two banks at that time; Farmers and Merchants State Bank and Hutto National Bank, both closed during the Great Depression as did most of the other businesses in the city. Hutto, as a town and community, never fully recovered from this and struggled to the outbreak of and through World War II.

On November 23, 1953 the Hutto Lions Club was chartered and Mr. Noel Grisham served as its first president. Charter members that are still active in the club are Anton Franzen, Charles Hanstrom, Edmund Schmidt and Hugh Davenport. Numerous members of Hutto Lutheran Church have been Lions in Hutto since its beginnings. In 1938 the Hutto Cooperative Gin Company was organized and continues to this day to be a major business and agricultural service to our community. Many of our Church members have been highly involved with the Hutto CoOp; notably Victor Stern, who served as manager for many years.

In 1954, Jim H. Holman, the son of Hutto's first mayor, served as mayor for four years and during his term of office in 1956 the city purchased the water works and a sanitary sewer system was installed. 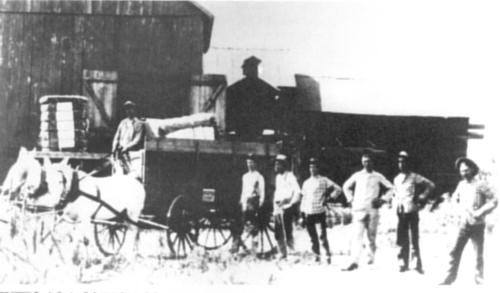 The 1980s and early 1990s resulted in a number of positive changes for the Hutto community. The Hutto Volunteer Fire Department dedicated the newly built fire hall and community meeting facility in October of 1983. In 1986 the new Hutto Elementary School was completed and has shined as a star of excellence and symbol of pride for our community. Beginning in August through the fall of 1986 the first meetings of the Chamber of Commerce took place in downtown Hutto. In just a few short years the Chamber of Commerce has become a vibrant force in our community and the sponsor of Hutto Olde Tyme Days as well as numerous other community projects. On April 24,1990 the new Hutto Post Office was opened to the public and on May 6, 1990 it was officially dedicated. In December of 1990 the Hutto community received optional local telephone service to and from the Austin metro area. In early 1990 a new water tower was erected by the City of Hutto and in 1992 Hutto was able to buy a new City Hall.

Members of Hutto Lutheran Church have long been committed to and involved in the Hutto community. Nothing bears this out more than thirty-one years of continuous service in the office of Mayor of the City of Hutto by a member of Hutto Lutheran Church. This started with the election of Carl Stern to the position in May of 1961, followed by the twenty year long period of mayoral service by Edmund Schmidt and more recently the service of Jeff Phillips. All three of these fine individuals have also served on the Church Council and various other community organizations. Many other members of the Hutto City Council and other organizations have been and are members of Hutto Lutheran Church. Pat Stromberg has served on the School Board in Hutto. Carl Lidell served for many years as a Williamson County Commissioner for our area. This same level of involvement has been and is true of the Board of Directors for the Hutto Independent School District, the Hutto Chamber of Commerce, the Hutto Lions Club, businesses in town and virtually every fabric of the Hutto community. Lutherans have long demonstrated our care and involvement where we live and work. It is in hope for a better tomorrow that we, as Lutherans and citizens of Hutto, must continue to make positive contributions.

Again, special thanks must be given to Johanna Wimberley and Ron Whitfield, who gave so much of their time and resources to help make this book possible.

Sponsorship thanks are gratefully extended to Carl and Marie Lidell and Carl and Lois Stern for each of their extremely generous contributions. Additional financial thanks are given to Aid Association for Lutherans, City National Bank of Taylor, Mike and Donna Fowler, Anna Viviette Fowler, Noel, and Helen Grisham, the Hutto Cooperative Gin Company, Edmund and Julia Schmidt, Taylor Motor Company, Ron and Mary Ann Whitfield who have provided contributions of $100 or more towards this 100th Anniversary publication. Without their heir, this book would not have been published.

Additional thanks to Marie Lidell for proofreading this work several times and to Su (Holmstrom and Olga Pearson for their previous work on Hutto Lutheran Church history Information provided by Mary Jane Hopkins, the Church Council, and all of the members of the 100th Anniversary Committee and our Church towards the assembly of this publication were greatly appreciated.