At the intersection of Bagdad Road (CR-278) and FM-2243 in Leander. Go .2 miles south on Bagdad Road. The house is on the left side of the road.

Built in fall of 1850, along with adjoining store and post office, all of native stone, by John Frederick Heinatz (1822-91), a settler from Germany. He was for many years postmaster of Bagdad, a public school trustee, superintendent of Sunday School, banker, and practical advisor to his neighbors. He married Emilie Krohn and had nine children, six boys and three girls, seven of whom lived to adulthood in this home. 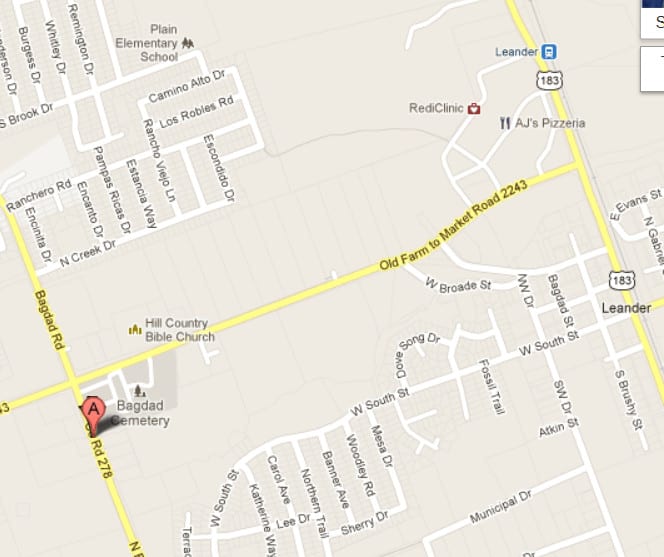 In 1848 he decided to try his fortune in the New World. Arriving at Galveston, Texas November that same year, he spent some time traveling in the North and East to seek a suitable location, but in the early part of 1850, he returned to Texas and married Bertha Rave, who died in a few months.

In the fall, he located on the prairie just north of Austin, later known as Bagdad, where he built with the help of an old friend, Mr. Hooster who was a stonemason, a substantial rock house and store Building all of native stone of the same quality still standing now as solid as when first built. He also built a grain mill.

On December 10, 1863, he married Emilie Krohn. They had nine children - who were all born in the homestead and lived there to maturity except Lewis, who died in infancy, and Sara, who met a tragic death by fire; the remaining were John, Charles, William, Shelton, Marvin, and two girls, Mary and Dora.

Mr. John Heinatz was Proprietor of the General Store, but he was more than storekeeper; he was an ironmonger, mechanic, Banker, gave legal advice, miller, and was the first Postmaster of Bagdad Post Office, which was established in 1854, and was a Mason, Steward in the Methodist Church, and Sunday School Superintendent, Trustee of the School Board and a patriot of the first degree.

The Town of Bagdad was situated on the second oldest road between Burnet and Austin.

The stage Coach passed right by the door and the old Stage Coach. The inn was just across the road.

Bagdad became a ghost town when the railroad bypassed it for the town of Leander, and Mr. Heinatz took the opportunity to buy up all the home sites enlarging his acreage to around 200 acres of land. Then later, he acquired 400 acres of rough wooded land directly west of the original tract.

The homestead with a store building still stands as solid as ever on a ten-acre spot with massive oak trees as well as the same house, stables, haylofts, corn cribs, carriage house, etc.

The windmill still furnishes sufficient water for the household needs and for the large stone trough in the cow lot; also, there is a deep cistern with pulley and bucket for additional water supply. It is located on a deep screened porch next to the kitchen.

Conveniences as gas and electricity were added many years ago, much of the original furniture is still in use, some of it a hundred years old.

The original plastered walls and high ceilings have been redecorated in the last decade. There are eight rooms and three porches, one used as an outdoor sitting room, well-screened complete with an old wooden swing and matching double rocking chairs, tables, and built-in corner cabinet with access to the other rooms by five doors.

The house, store, and other outside buildings were reroofed some time ago with corrugated iron and painted with aluminum paint.

Many antique portraits and other pictures adorn the walls. China, glassware, knick-knacks fill the cabinets and shelves.

John F Heinatz was a builder and Pioneer.

J. F. Heinatz, deceased, was a well and favorably known character in Williamson county, especially in the region known as Bagdad prairie, where he had been the leading business factor for nearly forty years. As the name indicates, he was of German birth and parentage, born in Prussia on December 6, 1822. He early learned the blacksmiths’ trade and followed that occupation in the fatherland until 1848, when he determined to try his fortunes in the New World. Arriving in Galveston on November 27 that year, Mr. Heinatz spent the first few years traveling throughout the North and West. In the early ‘50’s he returned to Texas, and, after a sojourn in Shelby county, located in Austin, where he soon afterward married Miss Bertha Raven. She died one year later without issue. In the fall of 1853, our subject located on the strip of prairie afterward known as Bagdad prairie, having been among the earliest settlers in that part of the county. He followed his trade in a stone blacksmith shop for several years, after which, on account of failing health, he embarked in the mercantile business. By honesty, fair dealing, and good business judgment Mr. Heinatz gradually built up a large trade, mounting from the condition of obscurity and poverty to a position of influence and wealth.

December 10, 1863, at Austin, he married Emilie Kruhn, who still survives, and whose many good qualities of mind and heart made his success possible.

Mrs. Heinatz was born in Princelau, near Berlin, Germany, on September 3, 1842, a daughter of Carl and Emilie Krohn. In 1854 the family came to Austin, Texas, where the father has ever since resided. The mother died in Austin, Texas, on January 25, 1878. Mr. and Mrs. Heinatz had eight children, viz.: Charles F., Mary, John, William, Dora, Shelton, Marvin, and Sarah. The last suffered death on January 13, 1891, by most distressing accident.

Her clothing caught fire while she was standing in front of a fireplace, and death ensued in a few hours. J. F. Heinatz died May 4, 1891, after a long illness; his demise occurred at his home in Bagdad. The business world remembers him as a successful and leading merchant, but the community in which he lived will always feel his loss as a promoter of every good work, as he was liberal of his means and untiring in his efforts to promote the general welfare of the community. He was an active worker in the Methodist Episcopal Church, South, and in his church papers, we find that “He was a Steward for many years, and looked after the interests of the church with a jealous care.” As a Sunday-school Superintendent, he was a success. On his death bed, as the minister entered the room, he turned to his wife and said: “Mamina, get that purse and make that settlement at once.” That being done, he expressed his satisfaction and said he was now ready to depart. His last words were: “I am happier today than I have been for a long time.”

Charles F. Heinatz, eldest son of the above, and who is now successfully carrying on the business left by his father, was born at Bagdad, October 12, 1866.

He began mercantile life at the age of sixteen years as a clerk for his father, but after two years left the counter for the free life on the plains. In June 1888, the firm of J. F. Heinatz and Son was formed, since which time he has carried on the business. It is now entirely his own enterprise and is the largest business in the new town of Leander, a town built from the ruins of old Bagdad. Mr. Heinatz was married in Burnet county, Texas, on October 1, 1890, to Ida M. Yett. They have had two children, Robert H, and Roy John F., twins. The latter is now deceased.