Early Taylor households were responsible for disposing of their own garbage.

Rubbish, paper and wood, was burnt in backyards and any remaining trash was taken to designated dump sites or abandoned in alleys and empty lots.

In 1928 Frank Castro went to work for the firm which was contracted by the city of Taylor to haul away refuse from the business sector. Frank and his mule drawn wagon were a familiar sight in downtown Taylor for more than two decades. Next to Mr. Castro, on the drivers seat, was a large white wooden box. Into it went broken or torn merchandise, that would be later repaired or mended; day old bread, bruised or wilted fruits and vegetables; that is everything salvageable. 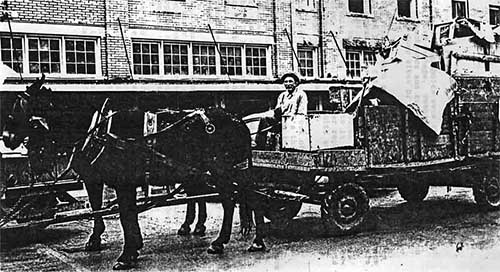 Electric refrigerators were out of the financial reach of many families in the 1920's thru 1940's. Many made do with an "ice box", a large insulated wooden cabinet with shelves and a side compartment in which a large block of ice was kept to provide cooling. The fruit and vegetables that Frank had put aside had to be used quickly before they spoiled. The produce was first washed and scrubbed by Mrs. Castro and children, then peeled and pared. What they didn't consume or can was given to their, neighbors. This provided an additional food resource for many families and was very welcome, especially during the depression.

To supplement his income, Mr. Castro saved the card-board boxes and cloth remnants, which he bailed; and collected anything metal, which he separated into piles of copper, aluminum and iron. Scrap dealers would come by monthly to buy these articles from him.

It was also part of Frank's job to care for the mules and wagon. The mules were kept in a pen just south of Mustang Creek, in the Washington Heights area, a few blocks from his home. In 1950 he converted from mules to a tractor to pull his wagon. Three years later Mr. Castro resigned his position and moved for several years to Killeen. Upon retiring he returned to Taylor to live till his death in 1967.