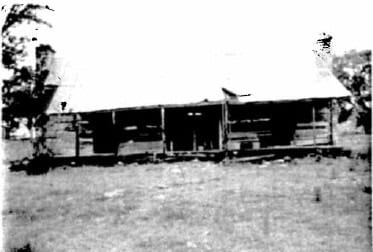 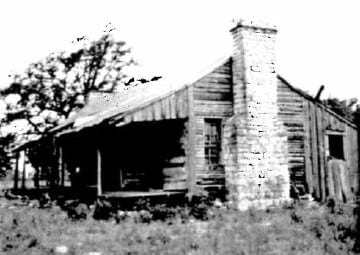 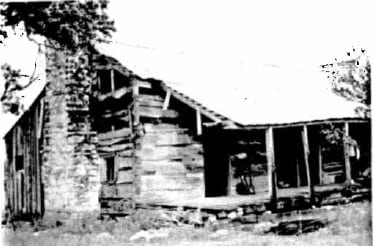 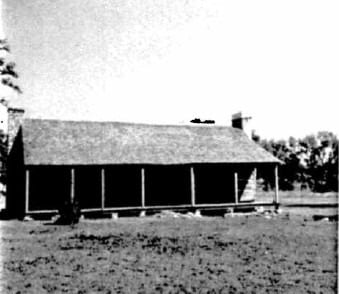 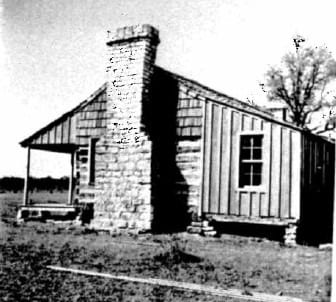 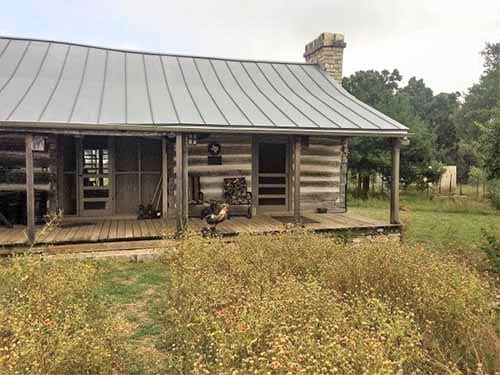 Built 1851 by Wm. Williams, settler from Arkansas. Owned 1901-1956 by family of a. Buck, also from Arkansas. Wood--Cypress, oak, cedar-- and stone were cut by hand, logs are joined by wooden pegs. Solidly built rooms are separated by a "dog run." recorded Texas historic landmark, 1968 - - Restored 1966-1967 by Walter and Margaret Collins

from the Texas State Historical Association

The dog-run, dog-trot, or double log cabin was a common type of house in Texas in the middle of the nineteenth century. The building consisted of two cabins separated by a ten or fifteen-foot passageway, with a continuous gabled roof covering both cabins and the passageway between them, or dog-run. Often a porch was built to extend across the entire front of the house, and lean-to shed rooms were constructed at the rear of each cabin for additional space. The walls were made of horizontally laid hand-hewn logs, with the openings between the logs chinked with sticks and clay. Later examples were often frame rather than logs. The floors were of either dirt, sawed boards, or split logs with the flat side up. There were few windows in frontier cabins, and glass windows were rarely seen in pioneer times. Each cabin had a door opening onto the dog-run. Doors and shutters were hung on rawhide or wooden hinges. The roofs were made of overlapping oak clapboards held in place by weight poles.

The chimney was constructed of sticks and a clay mixture, and the hearth was made of smooth rocks.

Later dog-run houses often had fine brick chimneys and shingled roofs. The purpose of the dog-run was to cool the house by providing shade and catching the breeze. Space served as a catch-all for farm and household articles and was the favorite sleeping place of the dogs. The structure was used on the frontier from Alabama to Ontario and has European antecedents.

William Williams was born in Tennessee in August 1804; his wife Rachel was born in Kentucky in November 1814. They lived in Arkansas suite a few years before coming to Texas, as six of their children were born there - three boys and three girls. Two younger children were born in Texas, but they must have died at an early age, for their names do not appear in later records. Rachel died in 1871, and William later married Jane Prewitt, but they had no children. William died in February 1894; he and Rachel are buried in a small cemetery near the log house.

Williams bought the land in 1851 from John F. Webber, and soon thereafter he began the construction of the present log house. The first structure was one large room, 15' X 15', with a stone fireplace in the east wall. With such a large family, it was probably necessary to add more room as soon as possible. How long it took is not known, but the construction shows that the entire addition was made at one time. The final structure was about 30' X 41', and contained a large room on the west, separated from the first room by an 8' "dog-run."

Aloft room above the west room was reached by a ladder or steep stairway from the room below. There is evidence that the builder was a man who took pride in his work and showed more than ordinary skill in some areas. 2X856

William and Rachel founded a large family, and many of their descendants are still living in the area, contributing to the stability and productivity of Williamson County. In 1901 the home place was sold to A. Buck, also from Arkansas. It remained in his family until 1956. It is interesting to note that though one of Williams, daughters, Susanna, who married James N. Brown, the Williams and Buck families were eventually united. Two granddaughters of Susanna and James married sons of A. Buck. From time to time some of William Williams's great-great-grandchildren and their families were residents in the old log house. And it was finally willed to them by the last remaining children of A. Buck - Lindy, who died in 1954, and Rittie, who died in 1956.