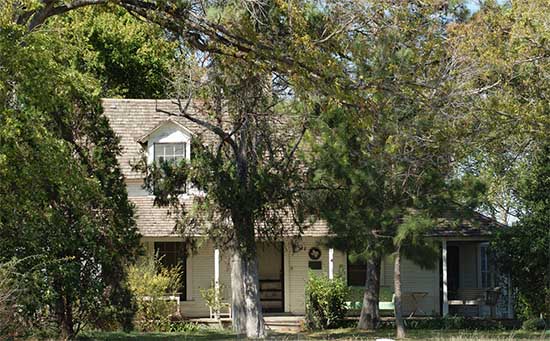 David Sloan and Robert Easley came to Central Texas from Pendleton, South Carolina, in 1852 with their wagon train and some fifty slaves. Family records tell of the perils of crossing streams and rivers when it was sometimes necessary for both men and horses to swim. Once the travelers built their road, eleven miles long, through the Mississippi River bottoms, The wagon train crossed the Red River at the "Five Nations," which is now the Oklahoma state line, 100 miles north of Dallas. They proceeded through the rain and Waco to Central Texas. These early records refer to Circleville and Taylor and two with stores in Georgetown.

Sloan and Easley bought over 4,000 acres of land in Williamson County. The price range was from 20 to 30 cents an acre.

The first dwellings were a group of log cabins built on that ridge just south of the San Gabriel River, which is now the site of the Sloan Easley family cemetery. The location provided a safe lookout for bands of marauding Indians who were known to pillage the homes of white settlers even to the extent of massacring an entire family.

Young David Sloan returned to South Carolina in 1853 to marry Elisabeth Easley and brought her back to Texas as his bride.

This home was built in 1854 when the threat of Indian raids had lessened. Native stone was used for foundations and chimneys, but lumber was hauled from Houston by ox carts. The original house consisted of two downstairs rooms, each with its own fireplace, two upstairs rooms, and the long front porch.

Great Grandpa and Grandma Sloan had seven children, four of whom were born and lived to adulthood in this home: Martha, David, Nancy, and William, my grandfather.

Great Grandmother Sloan died September 3, 1890 and was buried in the family cemetery beneath a beautiful oak which had shaded her log cabin when she came here as a bride.

Two years after her death op Grandfather William Sloan brought his bride, Catherine Tennill, here to live. Great Grandpa continued to live with them until his death in 1912.

Five children were born in this home to Grandmother and Grandfather Sloan, a boy who died at birth, and four girls: Mary, Annie, Catherine, and Clare. In 1922 Grandfather died in the home of his birth, Grandmother con­tinued to live here with her four daughters. Aunt Tump married Semen Moody here in the house in 1922, In 1933 in a double wedding Aunt Punch married Herbert Fuchs and Mother married Earnest Carlton in a garden ceremony on the front lawn.

I never than either of my grandfathers except from stories told an by other members of our family, but I have many happy memories of my Grand­mother.

Mother and I lived here during World War II while my father was in Central America working with the Civil Engineers on the Pan American Highway. In the years that have followed my two brothers, Charles and Robert, and sty sister, Ellen, and I have spent many happy summers here. We are the only Grandchildren.

Grandmother and Aunt Mary lived here until Grandmother's death in 1957, and now the home is occupied by Aunt Mary and Aunt Tump. We are all proud of this lovely old home which holds many wonderful memories for each of us. My two sons look forward to our trips here, and I hope they too will learn to love this home.

I speak for all of no when I say that we are very proud of this honor that has come to us today.