BARTLETT — On the way from his home in Lampasas to Bartlett last Saturday for the 27th reunion of the Civilian Conservation Corps (CCC) 3805, Bill Canady couldn’t help but notice some of the terraced farm land he passed as he got close to Bartlett.

Some of it was land he and other conservation corps members first terraced almost 70 years ago.The 20 or so people who attended the reunion in Bartlett were mostly born during the Roaring Twenties, grew up during the Great Depression of the 1930s and went from the CCC to World War II.

To put it in further perspective, one of the men who attended the reunion, Bill McDonald, grew up with a first-hand account of the day Old West outlaw Sam Bass was killed while robbing a bank in Round Rock.

McDonald’s father was seven years old and living in Round Rock at the time, and he saw a badly wounded Bass trying to make his getaway. He was one of the last people to see the bandit alive.

The era of the CCC is a time the surviving former members of Camp 3805 remember well, even as America’s subsequent generations have all but forgotten or never knew about those desperate times in our history. It was a time of soup lines, widespread unemployment, and deep despair. For a lot of younger Americans, the era exists in the past as misty with time as the Old West.

When people talk about America’s Greatest Generation, the work of the Civilian Conservation Corps is usually neglected, but from 1935 to 1942, about 2,000 young men moved through the Bartlett camp.

Normally, about 200 were located at Camp 3805 at any given time. They are still proud of the work they did for their families and their country.

“We were saving the soil,” Canady said. “It was all washing away.

On the ride out here, I could look out at some of the fields and still see the work that was done. The farms we worked on were some of the best ones around. They still are.”

In Texas, the Civilian Conservation Corps was split into two groups. One group constructed structures and helped create 56 state parks, including Mother Neff State Park. The other group worked on farms and ranches, pioneering soil conservation techniques like terracing and strip tillage, which are still used today.

The Bartlett CCC boys worked on farms around Bartlett. They built terraces, dug drainage ditches, and built fences. They were paid $30 a month and got to keep $6; the rest was sent home to their families.

He would later serve in the Navy during World War II for three years but doubts he would have been accepted by the military if he hadn’t joined the CCC.

“No, I would not have been fit for World War II service,” he said. “I was nearly starving to death. By working out here and getting regular meals, I was able to build a bigger, better body.”

Calvin Bible joined the Bartlett CCC from his home in Cedar Park in 1937 when he was 19 years old. He became a senior leader and stayed at the camp for almost four years.

“I remember we drove up to a place where we were going to work one day, and there was an elderly woman out front with her washtub and an old scrub board. She came out to talk to us. We told her who we were and what we were going to do, and she said, ‘You’re the ones who are going to “tear ace” our land!’”

The farmers were responsive and cooperative and helped out all they could, he said. “The work for them was free,” he said. ”They furnished materials, and we did all the physical labor. It wasn’t a bad deal for them.”

A couple of the men said they earned their “PHD” at the camp.

Clyde Brock managed to stay out of the “PHD program” for a while. His first job was in the kitchen. He started off with basic “KP” duty, then was “promoted” to the baker. “I told the mess sergeant, ‘I don’t know how to bake.’ He said, ‘If you don’t now, you will,’” he said. After he was sent to work in the field for a few days he decided he liked it back in the kitchen a lot better.

Brock, a Temple native, went from the CCC camp to basic training and then to the Army for years, including two years of combat in Europe. In Paris, he met his future wife, Lisette. He returned for her in 1949 and came back to Temple, where he owned Brock’s Dry Cleaning on First Street for several years.

Brock and a couple of other men who had worked at the Bartlett camp started talking about getting together for a reunion. His wife told him they needed to quit talking about it and actually put one together. The first one, in 1980, drew about 60 or 70 people.

Attendance grew after that, into the hundreds, before time began to whittle away the number of people who could make it back for the reunions.

For several years, the reunions were held in the American Legion Hall in Bartlett, which once served as the mess hall for the CCC camp.

One of the women at this year’s reunion, Anne Gibson Huddleston, was the daughter of the camp’s first superintendent. She attended second through fourth grades in the very building where the reunion has been held the last three years.

“I remember Bartlett with great fondness,” she said.

A special thanks to the Bartlett Activities Center for these photos 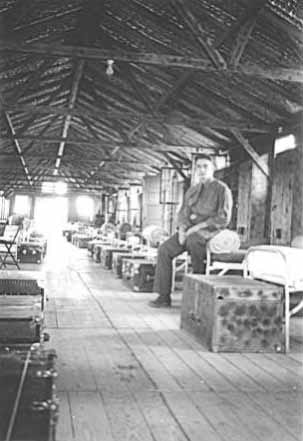 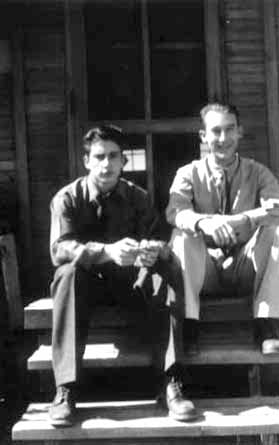 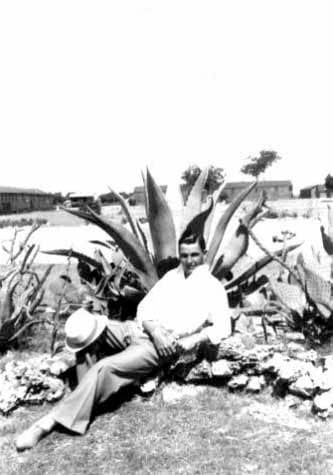 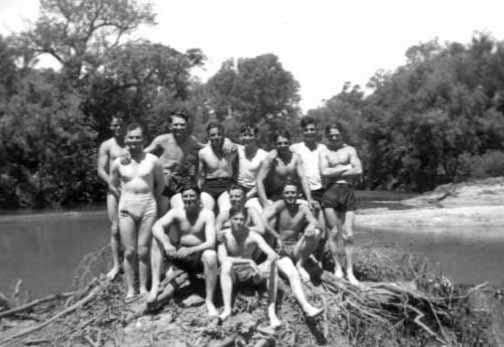 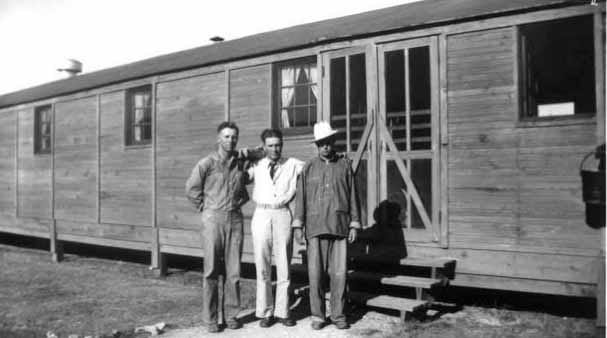 Bartlett in the Thirties

BARTLETT — The men of the Civilian Conservation Corps who were profiled in this space last week remember Ann Gibson Huddleston as a little girl when they worked at the Bartlett Camp 3805 in the 1930s.

At their annual reunion on Oct. 21, they remembered Bartlett as a place where they worked hard to earn a living for themselves and their family.

Mrs. Huddleston’s memories of Bartlett were a little different. As the daughter of Camp superintendent A.N. Gibson, she moved to Bartlett with her family from Belton, where her father worked for the Soil Conservation Service. Even so, the childhood veil of innocence didn’t completely shield her from the stark realities of the Depression.

“The boys were all young, 18 or younger,” she said. “They were starving to death.

The whole country was. I remember going to my father’s office and being terrified of those big boys.”

Perhaps because her father had a job, many people in Bartlett labored under the illusion that the Gibson family was rich. “We were known as the richest people in Bartlett, and that just wasn’t true,” she said. I had to deal with that the whole time I was here. In some ways, I still do.”

While the men labored terracing the land, digging drainage ditches and the like, Mrs. Huddleston was going to school in the Bartlett Grammar School.

That building, renovated as the Bartlett Activities Center, was the site of the Oct. 21 reunion. She attended second through fourth grades in the building.

“L.W. Herndon and his wife taught me right here,” she said. "We lived for a time on Clark Street with Hattie Whitlow. I walked to school here and walked home. “One day, I walked out a different door than the one I usually walked out of, and I got lost. Lost in Bartlett! Can you imagine? I came back to the school and walked out the right door and was able to find my way home from there.”

Mrs. Huddleston remembers a store built on the county line between Bartlett and Williamson Counties where liquor was served at one end of the store but not the other because one county was “wet” and the other was dry.

Also high on her list of Bartlett memories is the Hamburger King, where hamburgers are sold for a nickel. The proprietor, Sam Dillard, had a radio too. That radio sometimes turned out to be a powerful drawing card. “We would listen to the Joe Louis fights on the radio,” she said. “The whole town would buy a hamburger and stand around in front so they could listen to the prize fight. That was a big thing then. That and the serials. “Everyone (of the serials) would end on what they called a cliffhanger. You would have to go back next week to see what happened.”

She remembers Alma Mae Berry and her sister Lucille, who lived at the end of Clark Street.

“In those days, you always saved your cottonseed.

There was a big ol’ haystack, and we would slide down that haystack into that cottonseed. That was how we played in those days. We had more fun than you can imagine.”

While the men worked and Mrs. Huddleston played, significant changes were taking place in Bartlett in the 1930s.

The historic and colorful old Bartlett Western railway discontinued service for good in 1935, but most accounts show Bartlett holding its own in the 1930s, even in the midst of the Depression.

The city of Bartlett had electric service by 1905, but it would be 30 years before the rural areas where the CCC did its work got electricity. Rural electrification, along with the CCC program, was part of Roosevelt’s New Deal program, and Bartlett was the first community in the country to get electricity through the program.

After America entered World War II in December of 1941, many of the men of the CCC left Bartlett and the country for duty overseas.

The CCC itself was not formally disbanded, but there was no more funding for it.

That’s the way it went for Mrs. Huddleston and for the boys of the CCC who called Bartlett home for a few years in the 1930s.

While government programs might come and go, memories last a lifetime