Primary area of significance: architecture and association with a prominent individual. A good example of a late nineteenth-century dwelling in Georgetown. Retains much of its 1886 appearance and character. Built by lumberman George Irvine, a Scottish immigrant, for his own residence. George and Tom Irvine were owners and operators of the Irvine Brothers Lumber Co. in the early 1880s. It was the first planing mill in Georgetown. When his brother died in 1885, George Irvine operated the business until 1892, when he sold it to Moses Harrell and Charles S. Belford. The company eventually became Belford Lumber Co.

Scottish native George Irvine (1841-1936) built this two-story frame home for his family in 1886. The founder of the Irvine Brothers Lumber Co. (later the Belford Lumber Co.), Irvine was a civic leader who served on the school board, the city council, and the vestry of Grace Episcopal Church. In 1922 he sold the house to postmaster Simon J. Enochs, who made modifications to its original Italianate detailing in the 1930s.

In the 1880s, Georgetown was developing as an important commercial center of Central Texas. In Land of Good Water, Clara Stearns Scarbrough notes that by 1887 it had "two flouring mills, a mattress factory, a cotton gin, a candy factory, a bakery, a cigar factory, five blacksmith shops, three shoe shops" and a variety of other businesses.' The town's prosperity attracted individuals from other parts of Texas, as well as from other states and countries. Among those foreign immigrants who contributed to the late 19th-century development of Georgetown was George Irvine, a native of Scotland. He was born on March 21, 1841, in the Deerness Parish of the Orkney Islands, off the northern coast of Scotland, north-northwest of the port city of Aberdeen. He was the son of Thomas Irvine (1809-1891), a Scottish ship carpenter, and Jeanette B. Irvine (born 1805) [2]

In 1849, [3] the family emigrated to Canada, settling in the province of Upper Canada, now Ontario.

After living for a time with a family named Fatheringham near St. Catherines, in the vicinity of Niagara Falls, they moved to the township of Caistor (now Caistorville). In 1852, they moved to Grimsby, near Lake Ontario. George received his education in Canada and, like his brothers, Edward and Absalom taught at Will's school in South Grimsby. In the late 1860s, shortly after the U.S. Civil War, he moved to Texas, settling first in See County. A housebuilder by trade, he also lived in Live Oak and McMullen counties before returning to Canada in the fall of 1870. On November 24 of that year, he married Rebecca Kent, of English descent. [4]

In December 1879, George returned to Texas with his bride and settled in St. Mary's, then the main town of Refugio County and a leading port city of Texas. [5] Four children (Eva, Edgar, Chester, and Etta May) were born to the couple while they were there. [6]

In 1879, Irvine's moved to Georgetown, where George continued his work as a carpenter.

Two years later he entered the lumber and contracting business with his brother Thomas. The Irvine Brothers Lumber Company, also known as the "city mills", was successful and George continued the operation even after the death of Thomas in 1885. His efforts to enlarge and diversify the family business in the ensuing years included the acquisition of an ice factory begun by W. R. Chumley. [7]

At the height of his business success, George Irvine built a home for his family at 409 East University in Georgetown.

Completed in 1886, it was sited prominently on a lot west of Georgetown College (now Southwestern University). [8] The Irvine House is a two-story, T-plan, frame residence with Italianate detailing, especially in the paired brackets and the elaborate hood moldings. An unusual architectural feature is a seven-sided bay on the east side of the house, providing originally an interior space for a reading room that overlooked the adjacent college campus. Additional ornamentation includes jig-sawn bargeboards and detailing, appliqués under the window sills, bracketed hood molds, and a round-arched motif on the second-floor windows of both gables ends.

A historic photo of the Irvine House, taken shortly after its construction, shows no addition on the west side (see exhibit A).

However, Sanborn maps from the early 20th century show a small, one-story building connected to the house by a porch, and later by an enclosed walkway."' The frame addition does show in another early photo (see Exhibit B), although it is a different alignment from the present configuration. Mrs. Berna Sillure Cooke, a granddaughter of George and Rebecca Irvine, recalls that the addition served as a kitchen or dining area where Mrs. Irvine sometimes provided meals for boarders. [10] The home has been slightly altered by the addition of a small shed porch on the front and by the loss of some minor detailing over the years. The current owners, Randy, and Donna Wright plan to replace some of the ornamentations as time and funds permit.

He became a Mason on June 25, 1866, in the Ivy Lodge No. 115, Ontario Province, Canada. He continued his fraternal association in Texas, serving as a founder of Evergreen Lodge No. 325 at Oakville in Live Oak County. Family records show he became a Royal Arch Mason in the Henry
Thomas Lodge No. 90, Georgetown, and became master of Georgetown's San Gabriel Lodge No. 89 in 1888. [13]

In 1890, George Irvine sold the lumber business to Moses Harrell and C. S. Belford (the operation later became Belford Lumber Company). For a time, he continued to operate a grist mill, but eventually returned to carpentry with the Griffith Lumber Company.

Five years later, George Irvine sold the family home. He lived with the family of his daughter, Mrs. A. W. Sillure, for many years before his death, July 19, 1936. As with the death of his wife, he was recognized at his funeral by church leaders for his contributions to the Episcopal church-Bishop Clinton S. Quin, the able successor to Bishop Kinsolving, presided at the service. [15]

A native of Bentonville, Arkansas, he grew up in Evant, Texas, a town located on the lines separating Lampasas, Hamilton, and Coryell counties. In 1898, he wed May Nevans. Enochs was an educator and served as superintendent of the Lometa schools in Lampasas County. Later, he became the community's postmaster, a position he held for eight years before accepting the new assignment in Georgetown. He directed the Georgetown post office until 1934. Enochs died August 21, 1943, and his obituary notes that he was survived by two daughters, Mrs. Charles G. Heyne of Houston and Mrs. Hester Davis of Georgetown. [16] John and Eva Shaw purchased the Irvine House in 1934 and it remained in the Shaw family until the 1970s. [17]

The Irvine House is an important residence in Georgetown because of its architecture, it's setting, and its association with a prominent early business and civic leader. It also serves as an important representation of the town's growth and development during the Victorian era. 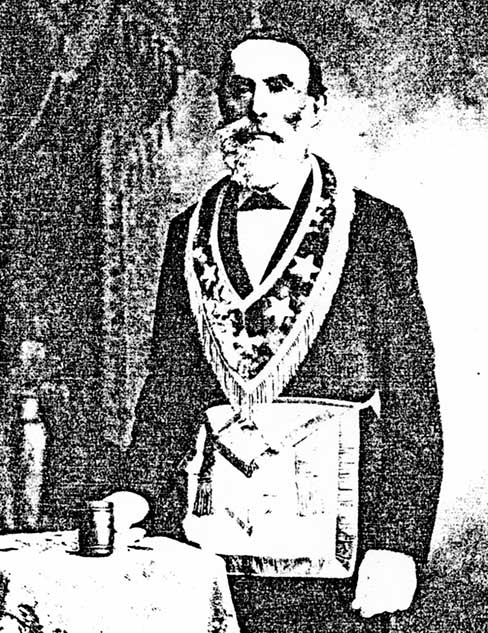