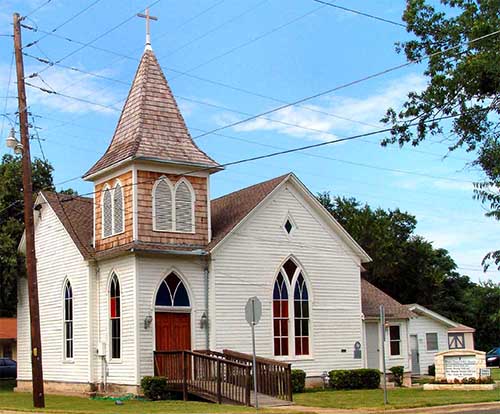 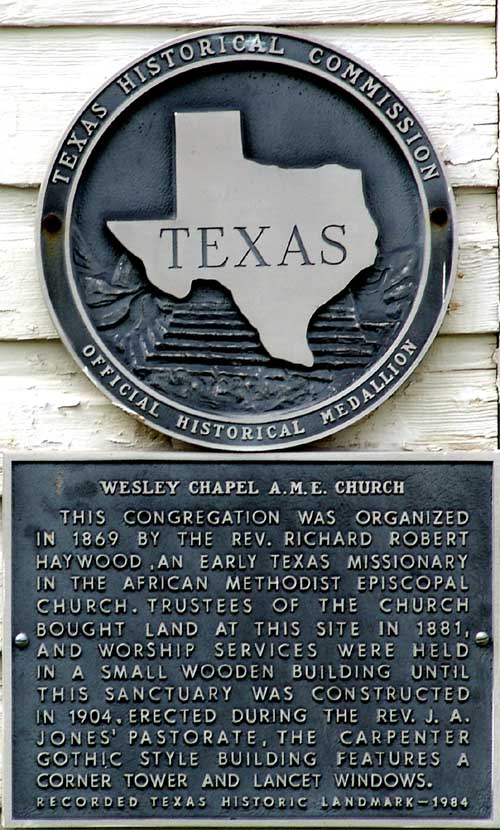 This congregation was organized in 1869 by the Rev. Richard Robert Haywood, an early Texas missionary in the African Methodist Episcopal church. Trustees of the church bought land at this site in 1881, and worship services were held in a small wooden building until this sanctuary was constructed in 1904. Erected during the Rev. J.A. Jones' pastorate, the Carpenter Gothic style building features a corner tower and lancet windows. Recorded Texas Historic Landmark - 1984

The Wesley Chapel African Methodist Episcopal (A. M. E.) The church is located at 508 West 4th Street, Georgetown, Texas, on the southwest quarter (lot 4) of Block 34. The site is part of one-third league of land patented to Clement Stubblefield, Aug. 19, 1844, and bought by Thomas B. Huling for $500, Feb. 20, 1846. In 1847, George W. Glasscock became Huling's partner in land development, and in May 1848, representing Huling, offered 173 acres of the tract to newly-formed Williamson County, provided the county seat be located on the track and the town named Georgetown. County officials accepted the offer, and proceeds from sales of the land went to the county. About 40 acres of it lie along the south and west margin of the South San Gabriel River, and the A. M. E. Church is about one block from that river. After the land was sur­veyed and lots marked off, the first public sale of townsite lots was on July 4, 1848. [1]

The early deeds were recorded in Volumes 1, 2 and 3 of land records, and/or in Police Court Minutes, Volumes 1 and 2.

Some early deeds evidently were not recorded, and many do not accurately describe property location; considerable litigation arose from the confusing records of that time. A thorough search of the above records, as well as probates of the period, failed to reveal the original purchase of Block 34. [2] The first clear record appears on June 19, 1869, when Wm. K. Foster, publisher of the Georgetown Watchman from 1867 to 1871, sold the south half of Block 34 for $300 to Radcliff Platt. Platt sold it on Mar. 27, 1873, to Mark Cook and Joseph Armstrong, who in turn sold it to the Trustees of the A. M. E. Church on Mar. 7, 1881, for $15.

The Trustees were Monroe Sansom, Mark Cook, John Rentfro, Joseph Armstrong, and Addison Rose. This deed further states that it replaces one made to the same Trustees on April 7, 1877, con­taining reservations which were never resolved and "which are now abandoned, which deed is now by consent of parties destroyed it having never been placed on record." The site was to be used for a place of worship subject to the discipline of the Methodist Episcopal Church of the United States. The two signers' names were written "X" with "his mark" and the names of Mark Cook and Joseph Armstrong supplied by the clerk. These signatures point up the well-known lack of opportunity for Negroes to receive educations, and was a common problem in the early A. M. E. Church, even among some of the most effective leaders of the time.3

Wesley Chapel A. M. E. Church, founded in 1869, has owned the land where the present church stands since 1881. Church pioneers recalled a tiny wooden building facing south, which was on that lot and used for a church until 1904. In the summer of 1904, the congregation began working on funding the new church. The local newspaper, the Williamson County Sun of June 2, 1904, commented: "The church fair that closed Monday night at the Masonic Hall was a credit to the committee and members of the A. M. E. Church. Many articles made by hand showed the skill and the talent of those that made use of the same, out of which the church realized a neat sum which will go a long way in helping to build the new church building." Bishop Evans Tyree of the Tenth District, Texas Annual Conference, had appointed Rev. J. A. Jones as pastor to Wesley Church, and it was Jones who "set out to build a new Church. . . . Mrs. Jones organized the children into a group called 'The Nail Club.' We bought nails for the building." The building was completed in time to host the A. M. E. Tenth District Conference there in December 1904. During this Conference, the church was formally dedicated, with Georgetown's mayor and dignitaries from Southwestern University assisting the A. M. E. choir, church officials, and others on the program. [4]

The 1904 structure is simple in design, of frame construction, and has some Gothic Revival characteristics.

Narrow beveled siding covers the exterior walls. The steeple sides are covered with scalloped, small boards, and the steeple roof with hand-split wood shingles. Heavy, paneled oak double doors, made in England in 1884, were in­stalled in April 1984 to replace some too damaged to repair, at the entry. Enough of the original stained glass in the windows has been salvaged to complete the glass in two windows back of the pulpit and choir area, where they are most visible to the congregation. Other damaged windows are now under repair and will be replaced soon. A small foyer leads from the main doors on the south into the sanctuary. Original wood floors and ceiling remain in the interior, as well as solid oak pews built by a church member, Jessie Chatman, a carpenter-cabinet maker. The original wood walls have been covered by walnut colored paneling, but the original wainscoting has been left and is to be refinished. The original altar rails and the pulpit have been re­placed, but the rails have been preserved, and the pulpit, also built by Jessie Chat-man, is now at the Mood-Heritage Museum in Georgetown. [5]

Wesley Chapel Church was built under the direction of the pastor, Rev. J. A. Jones, and the Board of Trustees in 1904: George Davis, Hardin Crisp, Harrison Smith, John Caldwell, Jessie Chatman, and Ed Brown, with consultations with Bishop Tyree and Rev. J. W. Watson, Presiding Elder of the District.

Church members are believed to have furnished most, or all of the labor on the structure, and the lumber was probably pur­chased on a cash basis from C. S. Belford Lumber Co., which was located a few blocks from the site of the church. Belford was well known for good quality materials and could provide building plans if customers desired them. The Negro Masonic Lodge, Thomas M. Keithley No. 45, F. & A. M., erected the cornerstone, with the date Oct. 22, 1904, and the names of the Trustees, Pastor, Bishop, and Presiding Elder at the time. [6]

On Feb. 26, 1907, the Georgetown A. M. E. Church signed a mortgage for $250 with the Board of Church Extension of the Methodist Church, Inc., Philadelphia, Pa., "to procure and possess a House of Worship adapted to the needs thereof."

Trustees who signed the contract were H. B. Bailey, L. W. Roberts, R. W. Williams, and Add Rose. It is believed that the funds were for furnishings and possibly some minor alterations. [7]

The addition of a small office and restroom on the southeast corner of the church and of a lounge and restroom on the northeast corner was added, probably in 1942, when a mechanic's and materialman's lien was signed with Belford Lumber Co., by the Trustees of the church: Elijah Tanksley, Warren Rose, Fred Bass, Addie Mason, and Grant Van Hoose. [8] In 1968, the A. M. E. Dining Hall and Kitchen were completed east of the church. Here, ladies of the church prepared and served Sunday dinners to make money for church projects. The Board of Trustees at this time were F. Bass, Sr., V. Ross, L. Henry, and Ernest Wilson. Stewards were N. Tanksley, E. Harrison, A. Wilson, and H. Tanksley. A short time later, the new parsonage was built on the south­east quarter of Block 34, and an area between it and the Dining Hall was paved to be used for parking.9

This 1904 church utilized standard materials readily available at the time, but not today, and they and the design were probably chosen for economic reasons. The building has been used for divine worship, for Sunday School classes, and as a place for meetings of church-related groups. It is occasionally utilized for public and community gatherings, such as for special musical programs. Recently black citizens met there to participate in a panel discussion with candidates for Mayor and City Council of Georgetown. [10]

Work has been undertaken this year (1984) on the foundation, on some of the windows, and the first coat of paint has been applied. The steeple and several badly rotted window frames are in the most critical need of work, and some repair is needed on a small section of the roof overhang. The second coat of paint would be desirable. This is the only older and historic church left in Georgetown, a place noted for fine old homes, buildings, and churches. Local citizens and the present minister at Wesley Chapel A. M. E. Church, Dr. Roger A. Givens, are eager to see the building preserved. Dr. Givens, who has retired from ministries of large churches including St. James in San Antonio and St. Luke in Waco, where he was also connected with the faculty of Paul Quinn College, has been working almost daily at restoring the Georgetown church. His dream is to put it back into splendid condition and to keep its original form as much as possible.

Wesley Chapel A. M. E. Church, one of the older of its kind in Texas, was organized in 1869 by Richard Robert Haywood.

He was one of 15 men appointed late in 1868 to do missionary work in Texas. Rev. Haywood was assigned to the Austin Mission "and surroundings," and Georgetown proved to be included in the surroundings. According to a contemporary minister-historian of Haywood's, [11] these 15 men had little or no education, but with great force of character and native good sense, rode "their sorry Texas ponies and began preaching everywhere," carrying only a Bible, a hymn book, and the Discipline. In 1865, Georgetown's mostly white Methodist Episcopal Church South reported to its Annual Conference that it had 180 white members and 24 "colored" members; in 1866, it listed 150 whites and 65 Negroes as members; and in 1867, 150 whites and 30 Negro members. But in 1868 and thereafter, only white members were tallied on the annual reports, suggesting that by this time, Georgetown African Methodists were either contemplating or organizing their own church. [12]

Among the founders of the Georgetown, African Methodist Episcopal Church are believed to be the same five Trustees who from 1877 to 1881 were working to buy land for the A. M. E. Church. All five were listed in Georgetown's 1870 U. S. Census; all appear from the census to have lived in the same neighborhood; and each of them owned taxable property, indicating that they held stable positions in their community. As listed in the census, "Mun" Sansom was a farmer with six members in his family; "Joe" Armstrong was a wagoner with a wife and one young son; Mark Cook was a carpenter with a wife and two grown sons, both of them stock drivers; John Rentfro and "Add" Rose did general labor, with five in the Rentfro family and three in the Rose household.13 The Wesley Chapel A. M. E. Church has had a significant role in the lives of the Negro community of Georgetown and in the general welfare of the entire town.