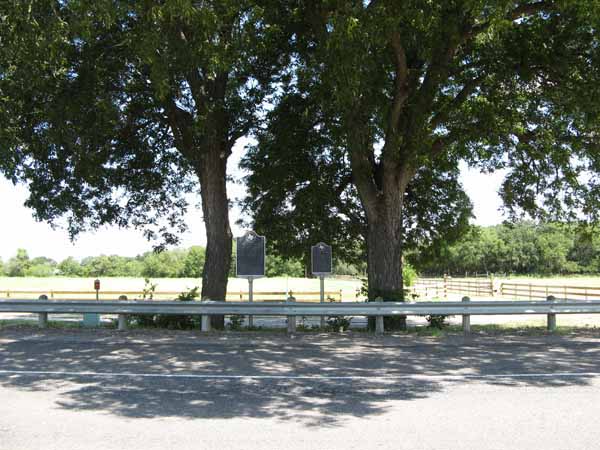 3 Miles East of Georgetown on SH 29

A dramatic chapter in administration (1838-1841) of Republic of Texas president Mirabeau B. Lamar. Aware of United States-Mexico commerce crossing Texas by the Santa Fe Trail near the Canadian River, President Lamar sought similar trade advantages for Texas. He initiated the Texan Santa Fe Expedition early in 1841, with Dr. Richard F. Brenham, Col. Wm. G. Cooke and Jose Antonio Navarro as commissioners. Cooke began recruiting in April, forming an artillery and five infantry companies. Remainder of 321 members included merchants (with $200,000 worth of goods), teamsters, guides and others. George W. Kendall, of the New Orleans "Picayune", joined to write classic book on the venture. Travel was by 21 slow ox-wagons. First day's march, June 19, 1841, ended on the San Gabriel, and expedition's campsite is near here. Before reaching the Santa Fe Trail some 600 miles north, the men were to have torturing experiences with drought and unknown terrain. Ill from hardships, the group was betrayed into the hands of Mexican authorities and sent as prisoners to Mexico City. However, this penetration of upper Texas gave the Republic stronger claims to her northern lands.

The Texan Santa Fe Expedition, a politico-military-commercial expedition of 1841, was occasioned by President Mirabeau B. Lamar's desire to divert to Texas at least a part of the trade then carried over the Santa Fe Trail and, if possible, to establish Texas jurisdiction over the Santa Fe area, which the Republic of Texas claimed on the basis of an act of December 19, 1836. Texas needed trade, and the Santa Fe market apparently offered the best opportunities, but no steps had been taken to exercise control over the New Mexican settlements until 1840, when William G. Dryden, a citizen of Santa Fe, visited Austin and, on being approached by Lamar, agreed to act as commissioner for Texas in an effort to influence the people of New Mexico to approve the change in government. John Rowland and William Workman, two other citizens of Santa Fe, were also appointed commissioners. On his return to Santa Fe, Dryden took with him, in addition to the instructions for the commissioners, a letter written by Lamar to the people of Santa Fe. In this letter, dated April 14, 1840, Lamar outlined the benefits which would accrue to the New Mexicans on their joining the Republic of Texas and promised that commissioners would be sent out as soon as possible to answer any questions and to perfect the establishment of the union.

Failing to get Congressional approval, Lamar, on his own initiative, proposed an expedition to Santa Fe to establish a trade route as well as to offer the New Mexicans the opportunity of participating in the Texas government. A call for volunteers was issued, and merchants were promised transportation and protection for their goods to Santa Fe. William G. Cooke, Richard F. Brenham, José Antonio Navarro, and George Van Nessqqv were appointed as city commissioners. The military force, to protect the merchants, was headed by Hugh McLeod with George Thomas Howard as second in command. The recruits were organized into five companies of infantry and one of artillery. George Wilkins Kendall and Thomas Falconerqqv accompanied the expedition as guests; these with the merchants, teamsters, and others brought the total number to 321. Twenty-one ox-drawn wagons carried the supplies as well as the merchandise of the traders, which was valued at $200,000.

On June 19, 1841, the party, officially designated the Santa Fe Pioneers, set out from Kenney's Fort on Brushy Creek, twenty miles north of Austin, and traveled north, crossing the Brazos River just below Bee Mountain on July 8 and striking the Western Cross Timbers in the area of present Parker County on July 21. The command pursued a northwestern course through the Cross Timbers and continued in that direction to the present site of Wichita Falls, where the Wichita River was mistaken for Red River. The pioneers followed the valley of the Wichita from August 5 until August 17, when they were deserted by their Mexican guide. They finally realized their error and sent a company out to the north to search for the Red River.

On August 20, a guide returned to lead the command to the northwest. Harassed by Indians and suffering because of insufficient provisions and scarcity of water, the expedition slowly made its way to the northwest. On Quitaque Creek in the area of present northwestern Motley County, McLeod, unable to find a route by which the wagons could ascend the Caprock, divided his command, sending a party of horsemen out to seek the New Mexican settlements while he waited with the wagons and the remaining force at the foot of the Llano Estacado.

The advance party, after suffering many hardships and encountering difficult traveling in crossing Quitaque and Tule canyons, finally met some Mexican traders on September 12 and sent a guide back to lead the waiting force on into the settlements.

The Texans had expected to be welcomed by the citizens of New Mexico and certainly had not anticipated armed resistance, but Governor Manuel Armijo of New Mexico had learned of the expedition and had detachments out awaiting the arrival of the Texans. Capt. William G. Lewis, one of the first of the advance party to reach the settlements, turned traitor and persuaded his comrades to lay down their arms on September 17. He was again used by the New Mexicans in securing the surrender of the main force, which had crossed the Llano Estacado and was encamped at Laguna Colorada near present Tucumcari, New Mexico, on October 5.

Thus without the firing of a single shot, the entire expedition passed into Mexican hands. The Texans, reduced in number and broken in health and spirit, had been conquered by the arid plains rather than by the force of Mexican arms. The Texas prisoners were marched to Mexico City. They were subjected to many indignities both en route and after their imprisonment in Mexico. The affair became the subject of a heated diplomatic controversy between the United States and Mexico before most of the prisoners were finally released in April 1842. Although generally considered a failure, the expedition stimulated a renewal of interest in Texas within both the United States and Mexico and formed a basis for Texas's claim to western territory.