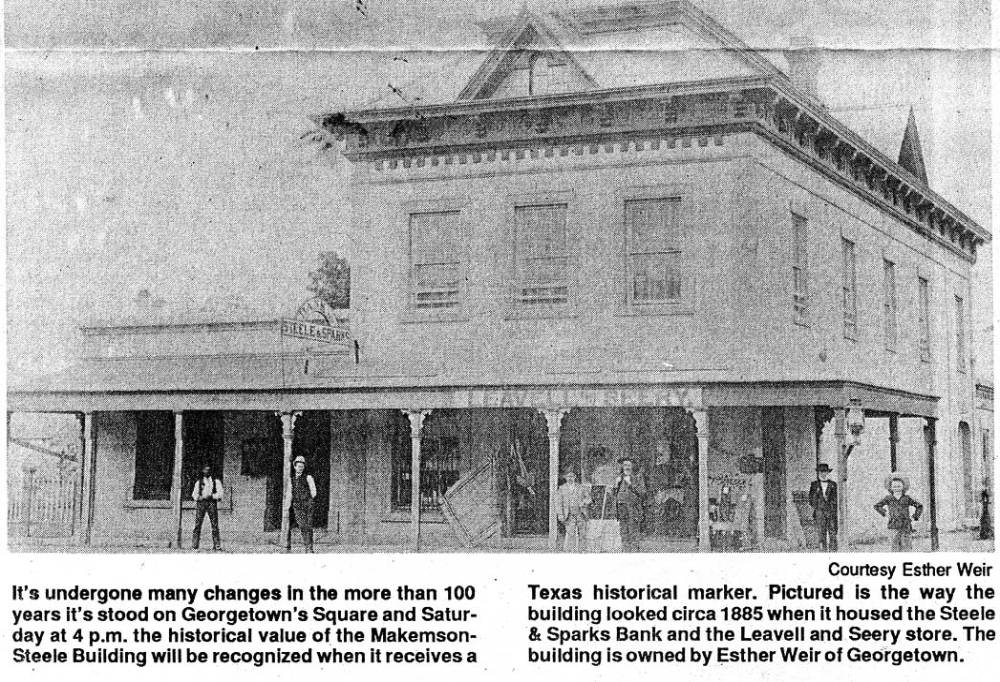 Built about 1870 by M.E. Steele on the site of an early log hotel, this is one of Georgetown's oldest commercial structures. During Steele's ownership it housed a mercantile and a bank. Emma Dickman Makemson later operated a hotel here from the early 1900s until 1924. Exhibiting influences of the Italianate style, the building features a truncated roof, corner entry, ornate frieze below the roofline, and finely crafted stonework.

The decade of the 1870s was a time of dramatic development for Georgetown. Despite the setbacks of the Civil War and repressive Reconstruction policies, residents of the Williamson County seat began planning boldly for the future of their town. Their actions were more than speculative or progressive, given the tenor of the time. In 1870, construction began on a new institution of higher education, Georgetown College. Within a few years, the school facilities became the campus of Southwestern University, envisioned by its founders as the state's primary Methodist College. By the end of the decade, business leaders had raised the necessary capital and constructed a railroad tap line from Round Rock, opening Georgetown to increased trade and improved communication.

An important symbol of the town's development during the 1870s was the construction of a two-story stone commercial building known first as the Steele Store.

It was prominently sited on a corner opposite from the city square, where another symbol of progress, a new courthouse, would be built within the decade. The city block which Moses Steele chose for his store had been an important commercial center since the earliest days of Georgetown. In 1848, soon after George Glasscock donated land for the county seat, Francis M. "Frank" Nash purchased the block on the southwest corner of the square. There he built a log building that housed a hotel and served as a stage stop. In the early 1850s, Nash sold the property to John and Jane Ake, who continued to operate the hotel.

The Ake Hotel was a popular place in early Georgetown and was visited by such prominent people as Judge R. M. "Three-Legged Willie" Williamson, for whom the county was named, James Webb Throckmorton, later governor of Texas, and the noted jurist and Baptist educator Judge R. E. B. Baylor. Another notable guest was Judge Robert Jones Rivers, justice of the circuit that included the Williamson County court. In 1854, while on a trip to Georgetown, he became ill with pneumonia. When his condition worsened, a local Christian man, Parson Stephen Strickland, was summoned. On his death bed, Judge Rivers offered the following observation of Georgetown and its only hotel:

'Parson, I have always been a firm believer in the fitness of things, and I have never been more forcibly impressed with this doctrine than I am at the present moment. I have been a great traveler in my day and time--have visited Europe, spent time in the principal colleges, stopped at magnificent hotels, lodged in inns and taverns, and I tell you now, Parson, with all these experiences flashing before me, I know of no other place that I can quit with fewer regrets than the new city of Georgetown and particularly this Ake Hotel.' And it is said that upon delivering himself of these last words, he turned his face to the wall and 'was no more. [1]

Initially a success, it was beset by the economic downturn brought about by the Civil War and Reconstruction and failed to survive. In 1868, due to unpaid taxes, the property was sold at auction. The purchaser, the attorney A. S. Walker, sold it again in nine days to Jane Ake and her daughter, Penelope Ake Steele, the wife of Moses Steele. [2]

Born in Kentucky, Moses E. Steele (1833-1889) later lived in Louisiana and Tennessee, where he learned the mercantile trade. An uncle who had raised him was already in Texas by 1855 when Moses came to Georgetown on a business trip. He was impressed with the town and returned in the fall of that year to establish his home. He worked as a clerk in a mercantile store until 1860 when he established his own business.' That same year, he married Penelope Ake (1840-1907). [2]

Moses Steele also encountered financial difficulties as a result of the economic problems of the 1860s. He tried farming for a while but soon returned to merchandising and later to the hotel business. He also served as Georgetown's postmaster during part of the Civil War years. [4] In the 1870s, Steele was a common factor in the city's major developments. He was an organizer of Georgetown College and eventually served as a trustee of Southwestern University. [5] He was also an organizer of the Georgetown Railroad Company, of which he was an early official. [6]

Although an exact construction date for the Steele Store has not been determined, available records indicate it was completed by 1870. The year after, property ownership was transferred to Penelope and her mother. An article in the Georgetown Watchman dated May 8, 1869, notes:

There are further signs of the improvements of Georgetown being manifested every day. Large stone loads are being quarried nearby for a stone business house soon to be erected, and preparations consummating for three or four more. [7]

That the Steele Store was one of the buildings mentioned is evidenced by a newspaper notice in April, 1870:

Family groceries, Dry Goods, Boots and Shoes, Queensware, Notions, etc., to be had at M. E. Steele's Store one door above the Alamo Hotel [successor to the Ake Hotel]. A good supply on hand, and prices moderate. [8]

Steele later entered into a banking partnership with Capt. John Sparks. In 1880, they purchased the Bank of Commerce and moved the operation to Steele's building. That same year, construction began on a one-story addition on the south side to accommodate the new Steele and Sparks Bank. Capt. John Sparks was one of the more colorful individuals in the history of Williamson County. The Mississippi native, who attained the rank of captain in the Confederate Army, moved to Georgetown following the Civil War and became a successful rancher. While retaining his business interests in Williamson County, he moved to Nevada to speculate in the gold-mining business. There, he was elected governor of the state in 1902 and served two terms in office. He died in 1908 and was buried in Reno. [9]

The truncated roof, an element associated with Italianate and Second Empire styling, is a later modification of the original flat roof. The change was made in 1886 according to a Williamson County Sun article, which noted, the mansard roof on the residence and store of Mr. M. E. Steele, on the southwest corner of the square, is about completed. [10] The roof redesign featured gables, but they were removed. By 1926, when historic photographs show the present configuration see attached). The 1926 photos also reveal that a second floor had been added to the south side wing (Steele and Sparks' Bank).

The Italianate influence is evident in the use of heavy brackets and in the ornate frieze of the entablature. Another important architectural feature is the cut and dressed stone, which is large in scale and reflects good craftsmanship. The primary entrance is set at an angle to the street intersection but in direct line of sight with the courthouse square. Evidence of the corner entry, including the iron post, was uncovered in recent restoration work. A secondary entrance on the north side features an elliptical arch with a keystone and a wooden door with gouged and turned wood detailing.

Within the historic context of the Georgetown courthouse square, the Steele building is unique in several significant ways.

First, its age makes it one of the earliest commercial buildings in the town. Second, none of the early structures exhibit the attention to detail, the high level of stonework craftsmanship, or the overall proportions and massing evident in the Steele building. Third, its styling sets it apart from the other structures on the square, where metal storefronts, narrow facades, and Victorian elements are dominant.

Over the years, the building has housed several general merchandises, grocery, and hotel operations, as well as other businesses. A historic photograph, circa 1890-1900, shows the main section was occupied by the mercantile business of Leavell and Seery. Beaumont Leavell, one of the partners, was married to Mary Steele, the oldest child of Moses and Penelope Steele. [11] Subsequent businesses have included a barbershop, meat market, and feed store.

The first hotel rooms were offered by the Steele family, who retained ownership until 1891 when they sold to brothers J. L. and G. T. Hume. The hotel business continued under a variety of names, including the City Hotel and the Makemson Hotel. It is the latter that has provided the second name by which the structure is commonly known. The proprietress of the Makemson Hotel was Emma Dickman Makemson (1867-1938). She was born in Eberfeldt, Germany, and came to the United States with her mother at the age of five. Her father was already working in Galveston at the time. The family moved to Round Rock, south of Georgetown, where Emma worked in her mother's grocery store. There she allegedly witnessed the bank robbery and ensuing gun battle that ended in the shooting of the infamous outlaw Sam Bass. [12]

Emma Dickman married S. B. Makemson in 1888 and moved with him to Georgetown.

She operated a grocery store in the same block as Steele's business but later closed it to open a small hotel. By the early 1900s, she had moved the business to the nearby Steele building. There, the hotel developed as one of the most important businesses in the square. It was a temporary home for important visitors, as well as for the ubiquitous salesmen (drummers) that served burgeoning communities like Georgetown in the early 20th century. As the only hotel on the square, it became an important facility for business and political gatherings, especially impromptu discussions and debates conducted around the boarding tables. Among the colorful local characters seen frequently at the Makemson was Dick DeBordeleben, a former cowboy and trail driver who entertained guests with stories of life in the "Old West."

Emma Makemson continued to operate the hotel until 1924, when she conveyed the business to Mr. and Mrs. Henry Hoyle. She moved to Austin to live near her daughter, Mabel (Mrs. Alden) Davis. Mrs. Davis was a prominent civic leader in Austin, active in the garden club, women’s clubs, the Red Cross, the city parks .department, and the humane society. For her many contributions to the city, the rose garden at Zilker Park was named in her honor in 1973. Emma Makemson died at her daughter's home in 1938. She was survived by three children, a brother in California, and three grandchildren. [13]

In 1981, work began on restoration of the historic Steele Store-Makemson Hotel.

The project was undertaken by the A. C. Weir family of Georgetown, under the supervision of owner Laura Weir-Clarke, an architectural designer. The impact of the restoration project on Georgetown was immediate and dramatic. Successful preservation of the structure, a prominent anchor and one of the largest buildings on the historic town square, influenced other restoration projects, including the county courthouse. The recipient of the 1982 Texas Heritage Award for adaptive re-use is credited with inspiring the preservation movement that is an integral part of Georgetown today. It is fitting that the recent historical marker grant program instituted by the Georgetown Heritage Society include the Steele Store-Makemson Hotel as one of its first projects.