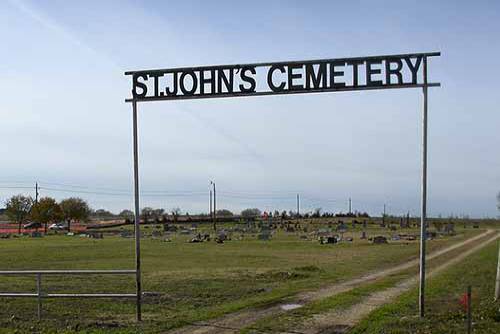 View from the West Corner of CR111

This burial ground is located on the site where the first Swedish Methodist church in the Brushy Creek area was located. In the early 1870s, Swedish immigrants began to settle in this area and by the early 1880s, Pastor C.C. Charmquist and residents established a church and cemetery here. The earliest known burial is of an infant, dating to 1881. In 1906, the congregation moved and was ultimately named St. John's United Methodist Church. In 1984, the St. John's Cemetery Association began to maintain the burial ground, though the graveyard continued to be closely related to the church. Early pioneers, community leaders and veterans of military conflicts dating to World War I are among those interred here. Historic Texas Cemetery - 2006 Marker is Property of the State of Texas.

The Brushy Area was one of the first colonies in Texas settled by Swedish immigrants in the 1870's. The Swedes brought with them expertise in agriculture, which they pursued by farming on the rich black land in this area.

Following several years of worshiping in homes and a schoolhouse, the need for a centralized church resulted in the purchase of land at the current cemetery site; a noted crossroads between Georgetown and Round Rock, currently known as Rabbit Hill Road (FM 1460) and Westinghouse Road (County Road 111). Two (2) acres located in the southeast corner of the John J. Dimmitt farm were purchased on March 28, 1882 (see enclosed Quitclaim Deed) upon which a small frame church was built for use by the Brushy Swedish Methodist congregation, which had been organized by Pastor C. C. Charnquist.

Shortly thereafter, a parsonage and barn were also built, a cistern dug, and a peach orchard planted. The first of many of the original settlers and their descendants were buried on the hill on the western-most portion of the property. The oldest known gravesite in the cemetery is that of the infant daughter of C. J. Monson. Her date of death noted on the grave monument is October 1881. C. J. Monson was one (1) of the (17) charter members of the Brushy Swedish Methodist congregation. This historical area is maintained as Section I of the cemetery with gravesites no longer available.

In 1902 property was purchased in Georgetown, Texas and a parsonage built.

A sanctuary was completed in 1906, at which time the original church at this site was sold and removed from the property. The church in Georgetown ultimately became named the St. John's United Methodist Church with the cemetery named St. John's Cemetery.

The cemetery was officially separated from the church on January 1, 1984, with its operation coming under the newly formed St. John's Cemetery Association. Initially, membership in the church was required for cemetery use, but later it became an inter­denominational, inter-racial, public cemetery with about 275 known gravesites as of this date.

The cemetery is the final resting place of veterans of both world wars and other military conflicts.