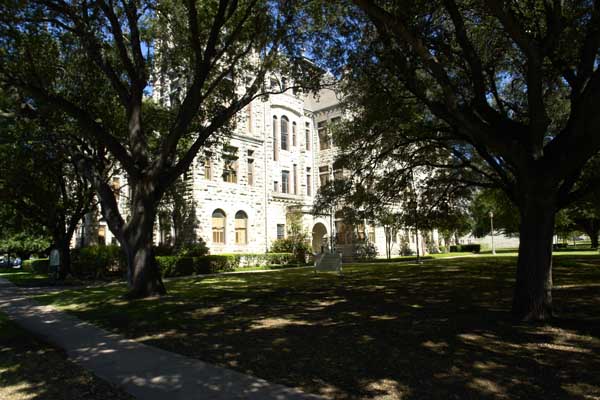 The Richardsonian-Romanesque influence Administration Building at Southwestern University, completed in 1900, is an asymmetrical design with the main facade facing south. The three-storied building, which is dominated by a large square tower, is constructed of rough-cut limestone quarried locally, then cut and dressed by hand on the site. A combination of the arched form and the trabeated openings with one or two transoms gives a liveliness to the general massiveness of such a large masonry structure. Adding to the picturesque quality are the ridge outlines defining the shapes of the various tripped roofs of the main structure, the pyramidal roof of the large square tower, the octagonal roof of the smaller turret, and the tripped roofed cupola crowning the structure.

The first design of the building showed the larger tower at the southeast come off the structure, but because of the view from the town, the designer elected to position the tower at the more prominent Southwest corner. The tower is the single dominant design element with verticality in the fenestratic reinforced by corner bartizans, steeply gabled dormers, and culminating in a slender spire and weathervane. Typical of the Richardsonian-Romanesque is the use of straight-topped windows by transoms in addition to the arched type. Also, the Main Building expresses the Romanesque style in its use of stone. The dual entrances on either side of the center bay are through vigorous law spring arches which reinforce the massive quality of the rough-cut limestone. Further stone detailing is evident in the dentils and incised arches below the third floor on the south facade.

The smaller tower on the southeast corner of the building is octagonal and capped by a ribbed convex conical spire.

The roof dormer in the center bay of the south facade is tied into the design of the wall through the use of pilasters. Twin wall dormers on either side are beautiful continuations of the slightly projecting bays below. The interior finishes are primarily pine floors and plaster walls with wainscoting. The floor plan consists of a central hall with a cross corridor at each end and connects to four stairwells. The upper two levels contain a large auditorium in which both lectures and chapel services have been held. There are offices and classrooms on each level. MOOD HALL -- Mood Hall is a three-story, asymmetrical building constructed of rough-cut limestone from the nearby Brushy Creek Quarry at Round Rock, Texas. Completed in 1908, the building is in a vernacular Richardsonian Romanesque style to blend with the Administration Building.

The hipped roofed is u-shaped. The south facade consists of projecting wings, each wider than the central bay. Originally an entrance courtyard in the center, which has been enclosed and roofed over, was accessible from the exterior through a triple arcade. The rough-cut arches, which are outlined with smooth limestone, spring from impost blocks on short tapered columns or pilasters of the Tuscan order. (See picture no. 1). The arcade is slightly recessed and supports a detailed cyma- recta cornice and a limestone balustrade.

A deeply recessed arcade connecting the projecting wings is at the second and third-story levels, is similar but with impost blocks supported by rough-cut limestone piers.

The arches at the third level enframe balconies with a wooden balustrade and have been filled in with French doors opening off the interior gallery. The other fenestration of this facade consists of single or pairs of windows, arched on the first level and aligned vertically.

The north facade having originally no projections or indentations has fenestration, which repeats that of the south facade. A single-story service wing originally containing the dining room and kitchen has been altered.

The overall effect of the exterior design is one of austerity and of restrained but clear articulation of both ornamental and functional components. The deeply-set windows emphasize the massiveness of the limestone walls.

An interior courtyard originally opens for ventilation to interior rooms has been enclosed and is surrounded by open galleries at the second and third levels supported by simple limestone piers. The galleries are for circulation and are enclosed by wooden railings, thus presenting a spacious and airy effect in contrast with the exterior of the building.

Completed in 1900, the Main Building is the administration building for Southwestern University, a Methodist denominational school in Georgetown, Texas, the oldest institution of higher learning in the State of Texas. The Main Building is a three-story, Richardsonian-Romanesque, limestone structure.

Southwestern University was founded in 1873 at the side of Georgetown College on charters granted to Rutersville College (Fayette County) in 1840, the Weslayan Male and Female College at San Augustine in 1844, McKenzie College, Clarksville in 1848 and Soule University Chappell Hill in 1856. The combined charter submitted to the Legislature bore the name "Texas University." The Legislature was at that time planning a state school and reserved that title for the University in Austin and instead approved the charter for "Southwestern University."

The original designs for the building came from the Physics Professor Robert S. Hyer, who later became Regent (president) of the University.

President Hyer had traveled to Boston about 1890 and had been influenced by the work of Henry Hobson Richardson. Though he was not a professional architect, he had constructed a working model of a church in Georgetown, showing the Richardsonian influence from which that structure was later erected. Subsequent to his preliminary designs for the Main Building at Southwestern, the Board of Trustees adopted plans and specifications or the construction by the architectural and engineering firm of Layton and Raymond, who undoubtedly had much input from Professor Hyer. The financing of the building was arranged with gifts of money and land, among the latter, a parcel of plantation land willed by General Sam Houston by his daughter at his death.

On securing the necessary funds for construction, a contract for $50,095 was awarded by the Trustees to Flume and Waters ton of Austin in 1898, "Waterston" being the same Waterston and Sons who were stone cutters from the British Isles imported more than a decade earlier to work on the State Capitol. After Hyer became Regent in 1898, he continued his supervisory role throughout the construction of the Main Building. Still, the administration building, "Old Main," is a significant landmark in Georgetown. MOOD HALL - Mood Hall, built as a men's dormitory, was designed to blend with the architecture of the Administration Building and thereby give the campus a unified architectural appearance. Mood Hall, named for the first Regent (President) of Southwestern, Frances Asbury Mood, was completed during the term of Regent Robert S. Hyer and formally accepted by the Board of Trustees on May 11, 1908.

The Board of Trustees and Regent Hyer wanted a facility to compare favorably with that of any other university. Rooms were to be designed to be ventilated naturally, with every room having an outside opening, and the best equipment available was to be installed in the building. The dormitory would have its own heating and power plant and would be designed to have complete plumbing facilities on each floor. The kitchen was to be outfitted with the most efficient and up-to-date equipment to make Mood Hall is very desirable boarding place. The construction contract for $58,000.00 was awarded to Belford Lumber Company of Georgetown, who in turn subcontracted the masonry work to Waterston & Sons of Austin, who had earlier completed work on the Administration Building for Southwestern, as well as the State Capitol. The architect was C.H. Page of Austin. Major modifications to the buildings, including the closing up of the open interior courtyard and the entrance court on the south, occurred in 1943 as a result of the U.S. Navy V-12 program.

The University entered into a contractual agreement with the Navy who in turn wanted to utilize the Kuykendall Dormitor, previously housing the women students, for the V12 program, and consequently, Mood Hall was modified to be a dormitory for women. In 1965, Mood Hall became an office building for organizations and the faculty.