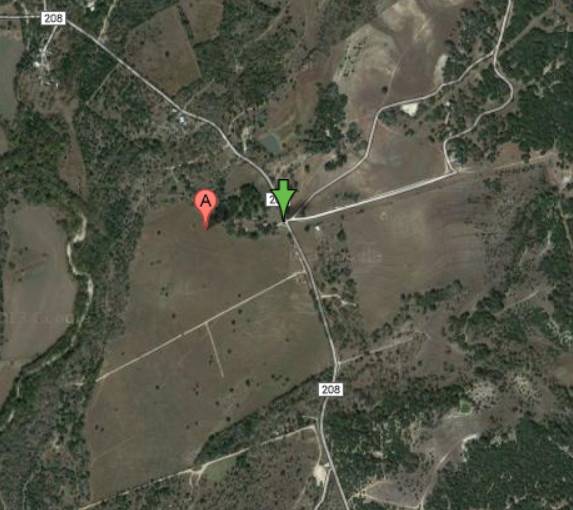 The McCormick home is located in the northwest part of Williamson County, Texas, on the north San Gabriel River, between the towns of Bertram and Florence, 2 miles west of US Highway 183.

The structure was built by Bryce Miller Smart in the years 1855-1858. Mr. Smart was born in Indiana on February 8, 1816. He was married to Amy Cox in Springfield, Missouri, on February 14, 1836. Mr. Smart brought his family to Texas in 1852. He was settling on the banks of the North San Gabriel River in Williamson County.

Accompanying the Smart family to Texas were relatives of Mr. Smart who settled in and around the area of Florence, Texas.

Relatives of Amy Cox Smart settled in the area of Lampasas, Texas, on Lucy Creek.

Mr. Smart, a typical hardy pioneer, was a versatile man of varied occupations. He ran a freight line to and from Brenham, Texas, the nearest railroad, for supplies of all kinds. During the war between the States, Mr. Smart operated a tannery and furnished leather to the Confederate Army. He and his sons later owned and operated a flour and grist mill in Burnet, Texas. On January 1, 1880, as Mr. Smart was preparing for grinding, a tragedy occurred the steam boiler burst, killing Mr. Smart instantly and destroying the mill.

Mr. Smart realizing the need for a family home, began work on the structure in 1855. The house was built of native limestone, quarried, and hauled from the site to his home plot. The foundation of the house is 3 feet thick, with outer and partition walls 2 feet thick. Over each window and door openings are keystones for the outer and inner walks. The lime used in the mortar was made in a kiln on the banks of the small stream near the home. Three large rooms, three fireplaces, and additional walks were completed.

Upon the death of Mr. Smart, the widow, Mrs. Amy smart, and a daughter, Mrs. Margaret (Maggie) Smart McCormick, continued to live in the home.

Mrs. McCormick, born in Missouri in 1850, grew to womanhood in the rugged ways of the pioneers. As a young girl, She and a younger sister would often ride horseback three miles east to a bedding ground of the Chisholm Trail. There in the early morning, they would often find newly born calves unable to follow the herd. So the sisters would tie the calves to the saddles with their shoelaces and bring them home to raise. Mrs. McCormick began her herd in this manner.

It was Mrs. McCormick, a widow, the daughter of the original builder, and her son Mr. Charles Philip McCormick, who finally completed the homestead building. The roof was added to the additional walls and a large front porch. Mrs. McCormick owned and occupied the home along with her son and his family until her death in 1936.