First settled in the 1850s, this area boasted a school named Clear Creek by 1857. Concord School was established in nearby Brizendine Mills in 1883. By 1888 the Concord School was located in the Bear Creek settlement, succeeding the Clear Creek School. In 1896 H. N. Elliott and J. E. Elliott gave their land on the shore of Bear Creek for the site of a one-room schoolhouse. A new structure was added in 1921, and the facility was expanded as necessary. Enrollment peaked at 133 in the 1930s, but the school declined in the 1940s as enrollment dropped and young men and women departed to participate in the war effort. Graduates of the Concord School served Williamson County, the State of Texas, and the nation. (1999) 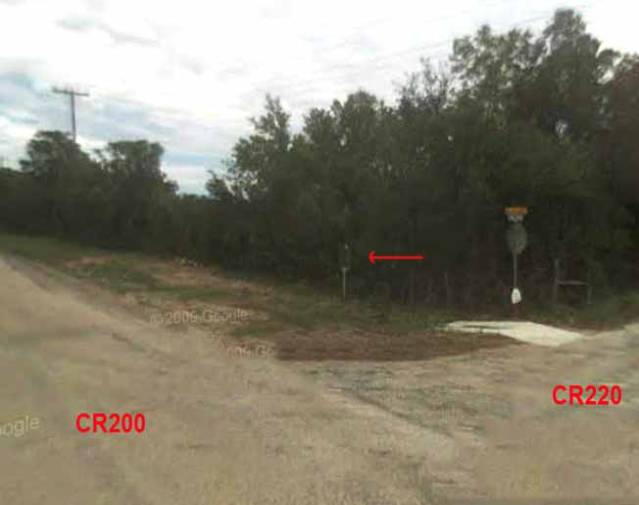 THE SITE OF CONCORD SCHOOL Historical Narrative by... by: Milton L. Pogue

The history of the early rural schools of Texas is one that relates to hardship, sacrifice, and dedication that, in the end, adds up to success. This treatise is concerned with a small area in Western Williamson County that is typical of many other areas of the state. Texas gained its independence from Mexico in 1836, and it became a state in the United States in 1845. Settlers from the Eastern States and foreign nations had drifted through Texas prior to its becoming a state, and some parts of the state had been settled. The year 1850 marks the date that people came to buy land, settle, and develop Central Texas.

The earliest settler in the Concord area was Samuel Mather. He was born on October 8, 1812, in Northumbria-on-Tyne, Scotland. He came to Texas by way of Canada, New York, Illinois, and Louisiana. In 1850, he bought a league of land on the North Fork of the San Gabriel River in Western Williamson County. Shortly after this purchase, he settled in with his wife, Sarah, and a step-son, John Dunlop. A "dugout" was their first living quarters. He built a log cabin, a grist mill, a blacksmith shop, and a building for the Masonic Lodge that also served as a church and a school building. [1] The school was a predecessor of the Concord School.

Another early settler was W. 0. Spencer who settled land to the south of Concord in 1853.

Spencer became the first Postmaster for Liberty Hill, and his descendants were active in the Concord community. [2] In 1871, Sampson Connell III moved to Williamson County with his family and settled on Bear Creek. He and his sons quarried rock by hand and built a large two-story rock house about one-fourth of a mile to the west of what was to become the Bear Creek location for the Concord School. One of the sons, Sampson Connell IV, later served as sheriff of Williamson County. He was first elected in 1888. [3] The Connell estate was sometimes referred to as "Connell's Kingdom." [4] In 1874, Thomas J. Duncan bought property near Pilot Knob about three miles east of the final location of Concord School on Bear Creek. Mr. Duncan was interested in schools, in 1888, he and two other men sold four acres of land for the small sum of five dollars to the North Gabriel School. [5] This transaction was important because North Gabriel School and Concord School were both in District 7. That district eventually evolved into a one-school district, and that school was Concord.

These early settlers came to Texas to build lives for themselves and their families and to help in the building of a State and a Nation. One of their needs was an education for their children. That need was met with a rural school on the top of a hill, in a valley, or by a stream. The school terms were short; the funds were meager, the teachers were not all well educated or prepared, but these early schools helped prepare Texas for greatness.

Concord School came into being as a successor of several small schools of the area.

Those were the days of the Common School Districts. Each county of the state was divided into districts. As time passed, district numbers were changed. Concord's district number was eventually established as number 7. 6 Sometimes, more than one school made up a district. For example, in 1892, District Number 7 consisted of Concord, Sycamore, North Gabriel, and Seymour.? Multiple schools per district continued until 1910-11. Concord and North Gabriel are listed in District Number 7 in that school year. [8]

During the first decade of the twentieth century, Concord grew to a two-teacher school.

The second decade of the twentieth century was one of growth and expansion. We make this observation because of the building program that was pursued in the 1920s and the continued need for two teachers for each term of school. For the school year 1916-17, J. N. Matthews and Miss Sunshine Marshall were the teachers. [21] Miss Marshall was later a popular evangelist among Pentecostal churches. [22] The teachers for 1917-18 were Iva S. Bogle and Mary Louise McRae. [23]

We have no legal description of the land which the Concord School occupied until the year 1896. On June 23, 1896, H. N. Elliott and J. D. Elliott deeded one and one-third acres of land on the waters of Bear Creek out of the A. J. Berry Survey to the Concord Community for school and church purposes. This transaction was not filed for record until nearly twenty years later, February 7, 1916. [24] Apparently, this deed for the land did not meet requirements because a second entry in the Deed Records of Williamson County dated January 17, 1922, shows J. L. Smith and wife conveying the same one and one-third acres as described above to the trustees of Concord Common School District Number 7. [25]

The original building for the Concord School on Bear Creek was a one room structure.

A wood-burning stove provided heat in the winter. There was no problem with cooling in the summers because school terms were usually limited to seven months or less. Most students sat on long benches; a few had homemade desks. Drinking water was carried in a bucket from a spring on Bear Creek. The building was also used by the Church of Christ as a church building for a few years. A near-by brush arbor was used for summertime meetings. Some students who attended school in this old building were Jack Mather, Euel Myers, and Edith Whitefield.26 Others were Clara Long, Lena, Frank, Onas, and Myrtle Whitehead. [27]

A new two-room building was constructed in 1921. [28] It was built on the east side of the old building but was not joined to it. The new building was of frame lumber construction and was equipped with factory-made desks, seats, and commercial chalkboards. This building was also heated with wood-burning stoves, and water was still carried in a bucket from the spring on Bear Creek. However, about 1930, a well was drilled near the northwest corner of the school building, and a hand pump was installed to provide drinking water. The school building was about fifty feet wide and one hundred feet long. It had a partition of folding doors between the two large classrooms. These doors were opened for group activities, entertainment, and community gatherings. Three or four utility rooms were located on the north side of each of the classrooms. The south wall had large windows for light and ventilation. A third room was added to the south side of the building about 1925, and three teachers were now employed for each school term. [29]

The decade of the 20's was one of growth and building for the Concord School.

The scholastic count for the district averaged about one hundred for each year during the last part of this decade. A. N. Brown was a census trustee from 1925 through 1930. [30] Some teachers for this period were Mrs. Townsend, her son, Garnet, and her daughter, Marguerite. Other teachers were Margaret Casbeer, Abbie Russell, and La Verne Simmons. [31] Some trustees for this period were J. T. Spencer, J. W. Atwood, and J. T. Barker. [32]

The "great depression" years of the 1930s were those of the height of the service of Concord School. During this time its enrollment peaked. The 1932-33 census roll contained the names of one hundred and thirty-three scholastics. [33] After this date, the number of scholastics declined. Among the teachers for this decade were Claude Jennings, Emma Jennings, Charlie Perry, Ralph Wolfe, Ruth Mosteller, Madge McCormick, Calvin Black, and Mildred Pennell. Pennell taught three terms, 1930 through 1933. In addition to the "Three R's," she taught the Bible and required her students to answer roll call with a verse they had memorized from the Bible. [34] Some census trustees for this decade were P. L. Moore, Wesley Brown, Lloyd Brown, and Carl Pogue. [35]

In addition to the regular academic activities, the students at Concord participated in sports and had entrants in the Interscholastic League from year to year.

They played marbles, basketball, volleyball, softball, and track. Before these playground activities could begin after the opening of a school term in the fall, a weed pulling chore by the students was required to prepare the schoolyard as a playground.[36]

The 1940s not only saw the continued decline in enrollment at Concord, but this decade also saw the closing of Concord School, and the world plunged into World War II with many Concord ex-students going away to take part in that conflict. Some census trustees at this time were W. E. Dollahan, Wesley Brown, S. M. Waley, and J. C. Carpenter. [37] Some teachers in the 1940's were P. A. Witcher, Minnie Steinbaugh, and Velma Hancock.38 Kenneth Brown was among the last students at Concord. He stated: "My last year at Concord was the 1944-45 school term. I started at Liberty Hill in the fall of 1945. Miss Velma Hancock was the last teacher at Concord." [39] Students from the Concord School District were transferred to the Liberty Hill Independent School District for 1945 through 1947.40 The Concord School consolidated with Liberty Hill in 1947. [41]

Specific examples of public servants from Concord School are seen in the lives of William Buck and Wesley Foust, who were her students in the late '20s and early '30s. Buck served as Williamson County Tax Collector and Assessor from February 1971 to December 1983. [42] Foust served as County Commissioner for Precinct 2 from November 1962 to December 1990.43 At his retirement, only one man had served Williamson County as a Commissioner longer than he.

Two ex-students of Concord died on the battlefields of World War II.

One was Douglas Mather, great, great-grandson of early settler Samuel Mather. The other was Gus N. Dycus. Their names, along with others who died in World War II, are engraved on a monument in Veteran's Square in Liberty Hill.

It would bring great satisfaction if we could point to some great jurist, or some brilliant state leader, or some nimble surgeon as being a former student at Concord. But, even in the absence of any of these, we still conclude that Concord School made an important contribution to the development of Central Texas. Those people who attended school at Concord are those who have borne the burden of transition from raw land to a well-developed area. They moved from the horse and buggy era through the early days of the automobile to the modern highways, airways, and space travel. They now live in modern homes and compete in the computer age.

Today, there is a vacant plot of land at the southeast corner of the juncture of Williamson County Roads 200 and 202. That plot of land is a former site of the Concord School. Many who pass that site today do not know that it is the former site of a school for hundreds of country children, who today and in time past, have helped to make our State and Nation the very best on this earth. Concord ex-students would like to see this spot marked because of its humble, but significant contribution to the development of our State and Nation.

This narrative was written... by Milton L. Pogue