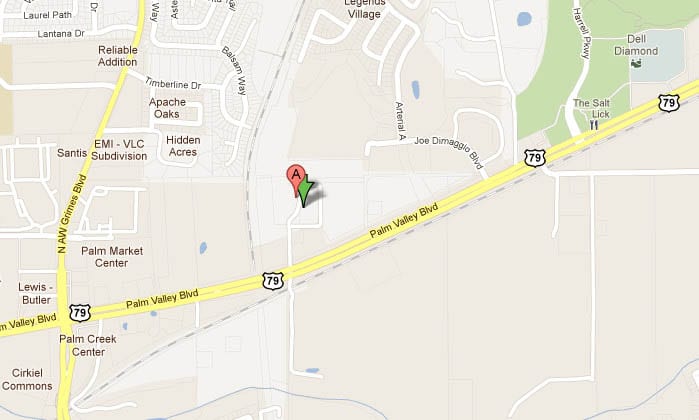 Swedish immigrant Anna Palm moved here with her family in 1853. The original church was a log structure. The present Gothic Revival style building was erected in 1894 at the cost of $10,000.00. The popular church operates a school and cemetery. All church services were in Swedish until 1928, when English was added. Since 1941 all services are in English.

As one nears the town of Round Rock, Texas, on Brushy Creek, his attention is drawn to the church in the Valley. The picturesque steeple that graces the Palm Valley Lutheran Church rises from this tranquil Oak Valley and seems to stand as a beacon, ever pointing to Him who is the source of all our strength.

This countryside church is the oldest in Round Rock and is steeped with a rich historical heritage. The modest beginnings of this congregation, first known as Brushy Church, are closely associated with the first settlement in this area of Texas. The first settlement occurred at Kenney's Fort, one-half mile south of the church on Brushy Creek, in 1838.

In 1861 Mr. Andrew John Nelson, aware of the spiritual needs of the community, built a log church with the help of three of his hired men, Mr. C. J. Swohn, Mr. Carl Flint, and Mr. Gottfried Anderson. This log church was also used as a school and is generally regarded as the founding seat of the community and its school system.

As chairman, Pastor Tillman organized the congregation on the first Sunday in advent November 27, 1870. There were sixty men, thirty-three women, and sixty-one children who became members of this congregation. This congregation was to be known as The Palm Valley Lutheran Church.

Among the earliest immigrants was Mrs. Anna Palm, who came with her six sons in 1853 to make her home in this community. As a result of their influence and their contribution to the community, the church came to adopt the name Palm Valley.

Soon after the organization of the congregation, a plot of land was given to the church in 1871. This land was given by Mr. S. M. Swenson, who as the leader of the Swedish immigration to Texas had acquired most of the land in this vicinity along Brushy Creek. According to the deed in the court records of Williamson County—"a deed was given by S. M. Swenson to a plot of land of 21 4/5 acres to Arvid Nelson, Daniel Hord, Andrew J. Palm, and C. A. Engstrand, as trustees for a Swedish Lutheran Church Association, to be used for church and school purposes.

This document was signed by S. M. Swenson, Commissioner of Swedish Immigration to Texas in New York.

Later one acre was designated as God's Acre. This cemetery is located back of the church, and the first fully dated tombstone bears the date 1863.

In 1872 a second church was built to replace the little log church.

The plans for this church were drawn by Mr. Andrew John Nelson and may be found in the Andrew John Nelson collection in the Sir Swante Palm Library at The University of Texas. This building was made of lumber hauled by ox-team from Austin, Texas. Later the church was remodeled, and a steeple was added. This second building was given to Williamson County for a school when the third and present church was constructed. Later, when the Palm Valley and Stony Point schools were consolidated, the old church was used as a parish hall.

In 1894 in the same historic spot, the cornerstone for the present church building was laid. This church was built of red compressed brick by the Belford Lumber Company of Georgetown, Texas, at the cost of $10,000. It was fully paid for when finished.

This building is Gothic in style, and is 70 feet long and 40 feet wide.

And quoting from the original Swedish minutes, "was to have a steeple to be seen far and wide." This specification was truly carried out, and the original iron cross still stands atop the steeple.

Two primary kinds of wood were used in the church's construction—native oak and yellow pine. The interior wainscoting and the vaulted beamed ceiling are made of yellow pine and are beautifully preserved.

There are six of the original windows still intact. They are of stained glass with blue and yellow as the predominant colors. Other windows have been replaced through the years by art glass windows, given in honor of loved ones of the congregation. One of these windows attests to the long and faithful service of Pastor and Mrs. 0. M. Bloom, who served this congregation for over 36 years. This window was dedicated "to the glory of God, and in honor of Rev. and Mrs. 0. M. Bloom," in the year 1957.

The congregation is deeply grateful to Mrs. Bloom for her translation of old Swedish minutes and records.

These have added greatly to the historical knowledge of the present congregation.

The beauty of the interior is impressive in its simplicity. The windows, with their decorative richness of color, blend with the subdued lights of the sanctuary and create an atmosphere of deep reverence for the worshiper.

The first convention of the Texas Conference of the Lutheran Church was held in this church.

There have been no changes in or additions to this church since built-in 1894. It has been kept in excellent repair as each year has required.

The present congregation is planning to celebrate the one-hundredth anniversary of its organization in November 1970.

The history and growth of this country-side church are parallel to the life and times of the little town it has so greatly endowed with spiritual guidance and community enrichment.

It stands as a landmark in the religious history of Texas. We stand in reverence as we think of the dedicated pastors and faithful members of the congregations who have maintained continuous worship services for one hundred and eight years.