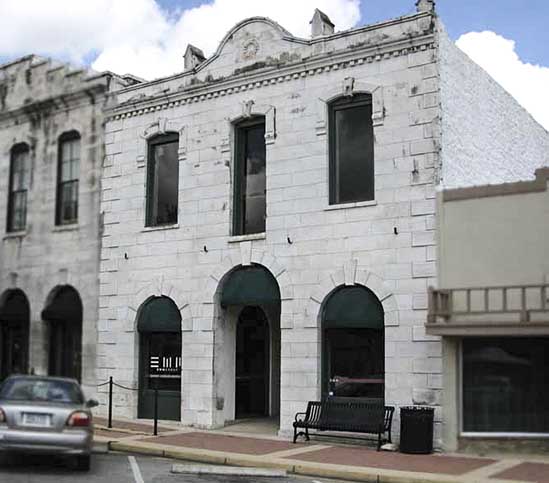 Erected 1879, three years after Round Rock expansion began at railroad's arrival. Some successive tenants included stores, physician, restaurants. After it was gutted by fire in 1963, architect Martin S. Kermacy and wife, Evelyn, built a modern interior within the Victorian Italianate walls.

The lot upon which the building is located was originally part of a one—third league of land (1,476.2 acres) deeded Thomas Anderson, assignee of Wiley Harris, by Mirabeau B. Lamar, President of the Republic of Texas, March 22, 1841. In 1847 the entire tract was acquired by Washington Anderson, who sold 150 acres, more or less, to the International-Great Northern Railroad Company in 1876. In the same year, the major portion of the 150 acres (127.75 acres) was acquired by the Texas Land Co., which subdivided the land into streets and lots, which were dedicated in 1878.

In 1884 it was sold for $3200.00 to Dr. A. McDonald MD, who died two years later, leaving a widow and six children using the premises as a residence". An inventory of Dr. McDonald's estate lists, "One stone house two stories high, Georgetown Avenue, Round Rock, Texas, $2500.00". This is the first specific mention of the building in the abstract of the property.

In 1938 the property was acquired by C.N. Shaver, together with the adjoining lot to the east, which portion was sold off to Martin Anderson in 1945.

Among the Styles that reached their zenith in 1860-1890, this building is a handsome, somewhat restrained example of the High-Victorian Italianate. Common to most buildings of this style are the fall proportions, the variety of surface textures, and particularly the windows' treatment.

High Victorian Italianate was the practical style of the day, not used for ecclesiastical or government work but rather for domestic, and above all, commercial buildings. Marcus Whiffen, in his book American Architecture since 1780 - A Guide to the Styles, Says: "... It distorted convention, crashed through the rules of taste, was self-made; it gave an expression of structural frankness, assigning to the ornamental attributes of architecture a subsidiary, merely pretty role. It was, in short, thoroughly democratic (in the special American sense) and thus assured of the hearty reception this country gave to it when it crossed the Atlantic".

The front facade is regular smooth coursed limestone from the area.

The corners are framed with rusticated projecting quoins. The semi-circular arches of the ground floor are accented with projecting voussoirs tooled In a criss-cross pattern and projecting keystones. The openings of the second floor have stilted segmental arches and raised diamond bosses on the keystones. Above these, the cornice extends across the width of the building and is topped by a low parapet wall divided into three sections by pseudo-Gothic finials. The center section is raised to form a curving pediment, within which is inscribed in raised block letters, "Otto Reinke 1879".

The rear facade is rough limestone rubble, with simple, unadorned segmental arches over the openings. The downspout leader heads each sport a raised Texas star, and are reproductions of a mangled original found in a large old rubbish pile behind the building. The large center opening on the ground floor is original and was restored by removing the later masonry fill, which had. raised the sill to four feet above the floor. The exterior steel stair to the second floor is new construction.

As an architect, I had admired the building since it first came to my attention in the early 1950s. My purpose in buying it in 1970 was two-fold: to preserve what was left of it and to restore the building to a useful and active role in the burgeoning civic and business life of the community.

When I acquired the building, all that remained from the fire which had gutted it some years before was a dilapidated stone shell, which itself had been substantially damaged on the interior.

The old plaster was removed, and the stone was patched, pointed, cleaned, and waterproofed inside and out. Inside this shell, I constructed two concrete floors and a steel roof, utility room, and toilets on each floor, and allowed the old stone walls to remain exposed on the interior. I intended to provide first-class modern office space while preserving the handsome quality of the stone facade outside.

There was no pretext for or pretension of "restoration. Everything that was left of the original building was preserved, and the newly exposed stone walls on the interior bring to the inside the sense of the old building that it really is.

The Otto Reinke Building has always been a very busy place, with many people coming and going. There were a number of places of business in this building over the years. Old-timers remember among the earlier ones a pool hall and the J.E. Meeks Grocery and Feed Store. Next door at that time, the Round Rock Broom Factory was doing a booming business. Later the Bill Bakers had a cafe and called it the "Sam Bass." This business was made rather famous by advertising over the radio their "Wingless," "Neckless," Backless," fried chicken dinners. These dinners were served with hot biscuits and cream gravy. People came from miles around to enjoy this food. The Bradley Brothers, Allen, Eugene, and John purchased the Sam Bass Cafe from the Bakers, keeping the same name for their business. The Soil Conservation Office was also in this building for several years. The Kelley Cleaners were there from 1950 to 1963, when the building was gutted by fire. Several times through the years, the upstairs was used as a rooming house for men.

After the fire, the walls stood untouched for seven years until Mr. Martin E. Kermacy bought the building, and with loving care, restored it to its natural beauty. The facade remains the same. Brushy Creek Properties is at present occupying the building, and one of which Round Rock is very proud.