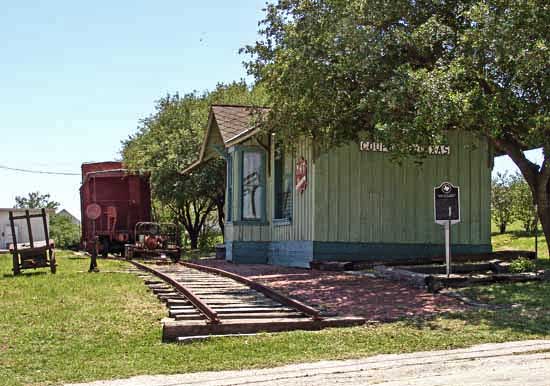 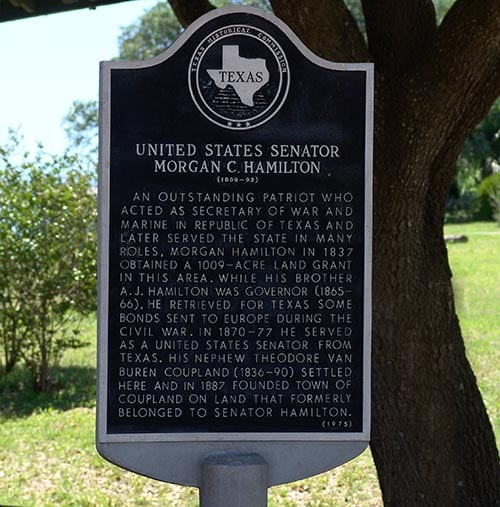 (1809-93) An outstanding patriot who acted as Secretary of War and Marine in Republic of Texas and later served the state in many roles, Morgan Hamilton in 1837 obtained a 1009-acre land grant in this area. While his brother A. J. Hamilton was governor (1865-66), he retrieved for Texas some bonds sent to Europe during the Civil War. In 1870-77 he served as a United States Senator from Texas. His nephew Theodore Van Buren Coupland (1836-90) settled here and in 1887 founded town of Coupland on land that formerly belonged to Senator Hamilton.

HAMILTON, Morgan Calvin, (brother of Andrew Jackson Hamilton), a Senator from Texas; born near Huntsville, Madison County, Ala., February 25, 1809; attended the public schools; engaged in mercantile pursuits in Elyton, Ala.; moved to the Republic of Texas in 1837 and owned a store in Austin; clerk in the War Department of the Republic of Texas 1839-1845; acted as Secretary of War and Marine ad interim of that Republic from December 1844 to March 1845; appointed comptroller of the treasury of Texas in 1867; delegate to the State constitutional convention in 1868; was elected as a Republican to the United States Senate on February 22, 1870, to fill the vacancy in the term ending March 3, 1871; subsequently elected for the term commencing March 4, 1871; took the oath of office on March 31, 1870, after the readmission of the State of Texas to representation, and served from March 31, 1870, to March 3, 1877; retired from public life and traveled extensively; was a resident of Brooklyn, N.Y., until his death; died in San Diego, Calif., where he had been visiting, November 21, 1893; interment in Oakwood Cemetery, Austin, Travis County, Tex. 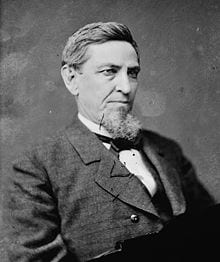 The land on which the City of Coupland was established 113 3 belonged to Morgan Calvin Hamilton, prominent in state and national government, and from Hamilton went to his heirs, one of who made his home at Coupland and whose name the town bears.

Morgan Calvin Hamilton was born near Huntsville, Alabama, on Feb. 28, 1809, and died at the age of 84, Nov. 21, 1893, while on a trip to San Diego, California. He was buried in Austin, Texas. A younger brother, Andrew Jackson, Hamilton (born in Alabama Jan. 28, 1815, died April 11, 1875, in Austin), also had a distinguished career. He came to Texas in 1846, held offices of attorney-general, a representative in the Texas Legislature, was a presidential elector, and was a U. S. Congressman when Texas seceded from the Union. One of the most ardent Unionists in Texas, A. J. Hamilton left the state when it seceded and was made brigadier-general of the Texas troops for the Union Army stationed along the Rio Grande.

He was appointed Governor of Texas by President Andrew Johnson, Hamilton serving from (different dates cited by Adair and Holz) June 17, or July 21, 1865, to August 9, 1866. His policy was to get Texas back into the Union with full privileges as soon as possible, and he held that suffrage should be returned to Texans without regard to their role in the Civil War. He called the Texas Constitutional Convention (fourth) to convene on Feb. 7, 1866. Following his governorship, Hamilton was appointed associate justice of the Supreme Court in 1867; in 1868, he was a member of the second Reconstruction Convention. At all times, he urged "Amnesty for the past and security for the future."

davisMorgan Calvin Hamilton moved to Texas from his home in Alabama in 1837.

From 1842 until 1845, he lived at Washington-on-the Brazos, after which he returned to Austin to make his home. He served the Republic of Texas in the War Department, first as a clerk and then as Secretary of War and Marine. He also operated a mercantile business in Austin until 1852, at which time he retired from active business. A strict Republican like his brother, M. C. Hamilton, opposed secession. During the Reconstruction years, he was appointed State Comptroller (1867) and was a delegate to the Constitutional Convention of 1868-69. He was elected U. S. Senator and served from March 31, 1870, to March 3, 1877. He then retired from public life and began to travel extensively. He made his home in Brooklyn, New York, but occasionally returned to Austin for visits. He is never married.

Morgan Calvin in Hamilton had considerable land holdings in Texas, including 1009 acres along Brushy Creek, which had been granted by the Secretary of War B. E. Bee from the Republic of Texas on Nov. 1837 to Joseph Jordan, and three days later, transferred to Hamilton, on Nov. 21, 1837. Hamilton was the assignee of Jordan. Mathias Wilbarger surveyed this land for the Republic of Texas on Oct. 6, 1842. There were conflicting claims to some of this land, but the question of legal ownership was settled by Patent no. 39, dated 24, 1859, and Hamilton awarded the judgment. The original was Bounty Warranty Lo. 400.

Karen Hamilton had married Hugh Coupland, and their children who inherited the uncle's land on Brushy Creek were Constantine C. Coupland, Nancy J. (Coupland) Spruill, and James D. Coupland, all of St. Clair County, Ala., and another son, Theodore VanBuren Coupland (which he usually wrote T. V. Coupland), of New Orleans; also the children of Harriet L. Coupland (a niece), named Ella, Nancy, Ada, and Ida McMillion, also of St. Clair Co., Ala. Of all these heirs, T. V. Coupland was the only one who came to Williamson County, Texas, to the land his uncle deeded him.

Theodore VanBuren (T. V.) Coupland was born in Jefferson Co., Ala., Oct. 16, 1p36, the son of Hugh and Karen (Hamilton) Coupland. T. V. Coupland came to Texas before the Civil War, residing in Austin, where he was Deputy Sheriff of Travis Co. Holding similar political views to those of his two uncles, on the outbreak of the Civil war he went to Mexico and from there to the Union lines in New Orleans, where he was made commanding, officer and a major in the First Texas Cavalry. Throughout the war, he served exclusively in the Western Department. His command marched from New Orleans to San Antonio and was mustered out there in l865. He then returned to New Orleans, where he married Fannie Flanders, daughter of Capt. Wardwell C. and Ann (Cunningham) Flanders. Captain Flanders, an old sea captain, trained as a boy on a whaling vessel and had settled in New Orleans. While in New Orleans,

Coupland served as Collector of the Port of New Orleans, later as Deputy Clerk in the U. S. Circuit Court.

After the Bequest of Williamson County property to T. V. Coupland from Morgan C. Hamilton, dated May 2, 1883, the nephew moved to the land the same year and took charge of the estate for himself and the other heirs. This property was referred to in the deed as Hamilton's "Brushy Farm" and the "'Battle Ground Pasture," plus his holdings of cattle on the place. Here, according to the HANDBOOK OF TEXAS, Coupland farmed and ranched on Brushy Creek, and many hundreds of cattle bore his brand until ill health forced him to dispose of his livestock interests. He continued to farm, however, until his death on Jan. 3, 1890. Coupland's "Battle Ground Pasture" mentioned in the deed was the scene of a battle with the Comanche's in Feb. 1839, when Jacob "Jake" Burleson, brother to General Edward Burleson, was killed during the battle. The only child of Major and Mrs. T. V. Coupland was Frank Hamilton Coupland, horn in New Orleans on Dec. 27, 1866. He was married on Nov. 8, 1883, to Sophia Heilhecker, and two daughters were born to this union.

T. V. Coupland of Coupland and C. H. Welch and H. Dickson of Taylor, and C. C. Coupland and J. D. Coupland, of St. Clair Co., Ala., formed a corporation known as Coupland City Co. to purchase and subdivide for sale the land in the "City of Coupland," established when the Taylor, Bastrop and Houston Railroad built a line south from Taylor through what now is Coupland. The company was chartered Jan. 19, 1887, and map of the proposed city was filed for record Mar. 28, 1887.