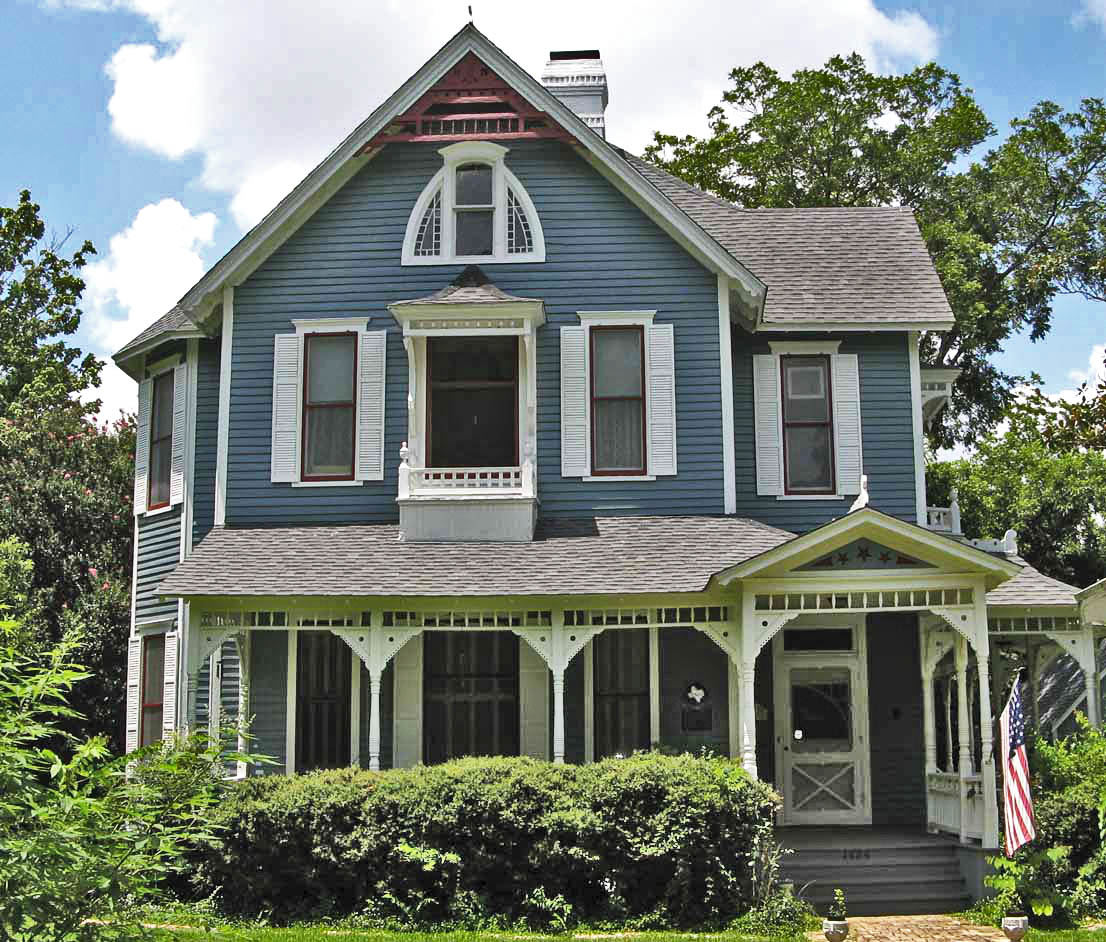 This beautifully restored home was built for banker Henry Harrell by Belford Lumber Company. This home has many Victorian elements - note balconies, bracketed canopy roofs elements, gingerbread/bargeboards under the gable ends, multi-pane tripartite attic window. (these can be seen better in the enlarged view)

Built about 1895 for lumberman Henry W. Harrell, this Victorian house resembles others erected in this neighborhood by the C. S. Belford Lumber Co. It was sold in 1907 to storekeeper W. F. Magee. In 1937 the structure was purchased by Judge Samuel Vaughan Stone, civic leader and county judge for 35 years, and his wife Berenice, who restored it. Occupied by three prominent families, this residence has been the scene of numerous social and church gatherings. Recorded Texas Historic Landmark - 1976.

Later that year, Mary Williams, who was by now married to W. E. Bouchelle and her husband sold their 10 acres described above to Thomas Proctor Hughes, the deed drawn March 2, 1857. The 10 acres brought $125. [4] Thos. P. Hughes (as he wrote his name) established what is known as the Hughes Addition in Georgetown out of these 27 3/4 acres which he purchased from Glasscock and the Bouchelles. On Dec. 31, 1894, Hughes sold to his daughter, Mrs. C. C. Cody, one-half of one block plus another block out of the Hughes Addition, for $2200. The full block, known in City of Georgetown records as Block C, Hughes Addition, is the block being considered in this narrative. [5]

As early as 1891, Harrell Belford (successors to George Irvine), were advertising they're; lumber, contracting, and building business. Harrell apparently withdrew from the partnership of the firm but continued to work for Belford Lumber Company, Georgetown, for a number of years. In the adjacent block, two two-story homes were built in 1895 by Belford Lumber Company for' W. Y. Penn and J. A. McDougle. The same floor plan, with minor changes, was used for these two homes, and materials, workmanship, and detailing are remarkably similar. The Harrell home is adjacent to the Penn and McDougle residences, and also follows the same floor plan, has similar materials, styling and workmanship.

It has not been proved, but all available evidence seems to indicate that the Harrell home was built at approximately the same time as the others, for which the date 1895 is documented. The home was built in a newly-formed Addition in town, where many of the substantial merchants and professional men of the community erected homes from about 1895 to 1900. Georgetown, the county seat, was growing, as was Southwestern University, located within a few blocks, so the need for new housing is evident. The home was built by Henry W. Harrell, himself in the lumber business, with Belford Lumber Company acting as an architect -contractor H. W. Harrell was listed as a director of the First National Sank, Georgetown, in 1897. Mrs. Harrell (Arabella) was interested in club work, and a friend of the family, Mrs. Bertie McDaniel of Georgetown, says that Alice Harrell, the daughter, often said that her mother “built the home for the history clubs.”

The large reception and dining areas are well arranged for large groups or for social affairs. [10] The second owner of this residence, W. F. Magee, and his wife, Tomye, lived there for thirty years. Mrs. Magee was an artist; Mr. Magee ran "The Good Store," which sold general merchandise, on the north side of the Courthouse Square. Judge Samuel Vaughan Stone and his wife, Bernice, have made this their home since 1937 and still reside there. Stone was Co. Tax Collector 1922-35; County Judge 1935-70; 30y Scout Master, years; Capt. U. S. Army 1925; chairman board of Trustees & Board of rewards, first Methodist Church; active in American Legion, Chamber Commerce, Phi Delta Theta; elected Georgetown Citizen of the Year 19' and 1952; Silver Beaver Scout, 1932; first chairmen. Williamson County survey Committee. Stone has taught school in Georgetown, is active in club and church activities and in civic affairs. [11]

The original structure, for which Belford Lumber Company of Georgetown furnished the plans and contracted the building, was two stories with six fireplaces, a large -L-shaped porch across the front (east) and north, a back porch; large hallways upstairs and down, one bath, and seven large rooms. The outbuildings were the cistern house, which still stands and is used for storage, and a maid's room. [12]

When the other settlers arrived, they found his tools scattered and his body with seven arrows in it and he had also been scalped.

The Comanche Indians were so fierce that Clementine Riley and her family moved from Honey Creek to Round Rock.

Clementine Dancer Riley lived in this house in Georgetown from 1908 until she died there in 1915. She is buried at Bear Creek Cemetery in Burnet, Texas, along with her husband, William McKendree Riley.

When Rev. Riley moved his family to Georgetown, Annie Pearl, the eldest daughter, was 16. The year was 1906. Miss Riley had just graduated from Alexander Collegiate Institute in Jacksonville, Texas (a Methodist School founded by Dr. Isaac Alexander, a Methodist minister who had ridden horseback from Virginia after graduation from Emory and Henry).

Alexander Institute later became known de as Lon Morris Junior College. Rev. Riley was president of the Board of Trustees at Alexander Institute. The faculty members were from Oberlin, Vanderbilt, Southwester, and the University of Texas.

Beulah Maud Riley, the second child, was 14. She attended The Southwestern Prep School located in the old three-story stone building, which was on the site of the present Georgetown High School.

When the College Street home was bought in 1908, Rev Riley kept his appointments in other churches in central Texas, coming home when he could. In the summer, Mrs. Riley would join him, leaving the girls to keep the house and to send their brother to summer school at the University. Young Riley preferred calf riding on the Yearwood Ranch to school work.

Material was acquired by C. S. Belford, who operated the lumber company, most of it shipped into Georgetown by rail.

Cypress and oak were used for beams, siding, and most of the other portions of the house. An unusual fan-shaped glass is used in the upper half of the front door: All doors and windows are trimmed in Victorian-style. The six fireplaces are finished with tile and wood, and no two are alike. The rooms are quite large, high ceilinged, with long windows, typical of the period. [13]

The home was built in a newly developed part of town near the homes of two of Harrell's friends, who built similar residences at the same time. All three homes are still standing and in good condition.

Apparently, no alterations were made to the house prior to 1937 when Judge and Stone purchased it. Since then, they have moved the maid's room to the north side of the lot and used it as a garage. The cistern house still stands and is joined to the back porch, part of which was converted into a small break­fast room. The kitchen has been renovated to make it functional but has kept the flavor of the home. A portion of the upstairs hall was made into a small bedroom, used as a nursery or a maid's room. Small portions of the upstairs rooms were changed into an additional bath and closet space, and a powder room has been added downstairs in what once was hall space. The original stairway: was changed only in one respect: a turn was added to provide more privacy to the powder room and kitchen area, but the original materials were used in the reconstructed stair. The cistern was cistern filled in and boarded over to make a floor in the small cistern house. Judge and Mrs. Stone added a small deck upstairs over the back porch, leading from the guest bedroom. [14]

A unique feature of the home at the present time (1975) is a mural which Judge and Mrs. Stone had painted on the walls of their dining room depicting places in Georgetown which have endeared themselves to the Stone family:

The Courthouse, the Harrell home and two adjacent homes to the north (the three built about the same time by the same builder and for three good friends), the First Methodist Church (also nearby), and two scenes on the Southwestern University campus, the Old Train Building, and the Ladies Annex. The mural was painted by artist Carl O. Bergquist, formerly of the Southwestern University Art Department, and now a professor in the School of Architecture, the University of Texas at Austin. The Stones also own four pieces of furniture, which once belonged to a longtime resident of George­town, John Sparks, who became governor of Nevada in 1902, serving until 1908. [15]

The condition of the residence is excellent, and it is kept in good repair at all times by the owners, the Stones. The home has been occupied by only three families in its 80 years. The first two occupants, Henry W. Harrell and W. F. Magee were substantial merchants in Georgetown and active in the life of the community. The present occupant served as County Judge for thirty-five years and was extremely active in civic and church affairs of his community. Wives of all three men have also been involved in the social, religious, and civic activities of the town, and through the years, the home has been the scene of numerous meetings and gatherings. [16]

Because of its role in the life of the community, its distinctive durability and workmanship as a Victorian house, and because it is located in a district of five homes and one church-- all from the same period and in equally good condition--the owner of the Harrell Home wish to commemorate the structure with a marker It is felt that by marking this home, along with others in the immediate area already marked or being marked, that the integrity of this distinctive district may be better recognized and preserved.