Circa 1901
801 Main Street
(on the square downtown Georgetown) 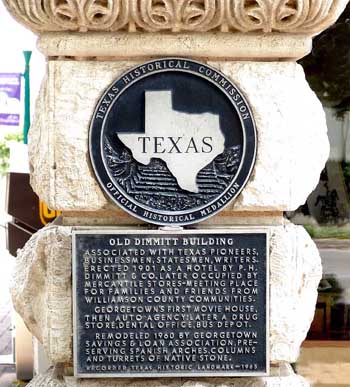 A brief history of Georgetown savings and loan association building

The present Georgetown Savings and Loan Association Building was erected in 1901 by P. H. Dimmitt. It was designed with the purpose of making it into a hotel, but these plans never materialized. It was then known as the P. H. Dimmitt and Company Building.

The first occupants of the building were retail stores. The smaller of the two shops was a millinery shop and occupied the space now occupied by Attorneys McClain and Stump. The larger portion of the building was occupied by a dry goods store called the "Good Luck Store". The store was operated by Georgetown pioneer W. F. Magee and served the entire surrounding area from Round Rock on the South to Jarrell on the north and from Liberty Hill in the west to Jonah on the east. The "Good Luck Store" was the meeting place and supply house for the community pioneers and their children.

They merged their talents and opened one of the Central Texas earliest Buick automobile agencies. Mr. Magee sold the autos and ran the office while Mr. Towns acted as a mechanic and ran the shop portion.

In the 1930s Tommy Cooper moved into the structure and remodeled it to house Cooper's Drug, later to be known as Cooper's Walgreen Drug. Cooper not only filled prescriptions and jerked sodas but opened Georgetown's first bus station for Greyhound buses. Thus travelers from far and wide visited the building.

Behind Cooper's Drug, Dr. Walter Martin opened his dental office and operated from that office until his demise.

Cooper's Drug saw many men and youngsters pass through and sip sodas on their way to fame and fortune. President Lyndon B. Johnson, during his early campaigns and political rise, shook many hands in Cooper's Drug and on the corner nearby.

Senator John Tower spent moments of leisure in the booths and at the counters, perhaps giving little serious thought to his future in politics.

In the 1950's Cooper's Drug closed its doors and shut in the memories of the past and of the people who were building a strong central Texas.

In 1960, W. Grogan Lord leased the building from Mrs. Lilburn Douglass, a Dimmitt heir, and remodeled the interior. Since 1901 the exterior had remained the same and it was Mr. Lord's desire and intention to retain the beauty of the early architecture and the comforting sight which the community had come to know as one of the city's lasting landmarks.
Today the exterior retains the old fashioned archway and column architectural charm, yet set back under these archways is the gleaming beauty of modern design with its enormous floor to ceiling plate glass windows and the soothing display of mahogany-paneled walls in the central heated and air-conditioned interior.

From "Good Luck Store" to picture show to the auto agency to the drug store and bus station to its today's financial corporations, the building has been recognized as a place where service has been rendered to Texans. It has been the Southeast corner of the square, thus making up a major part of the face of Georgetown. It was and remains a landmark not easily forgotten by Texans.